Elections 2022 LIVE Updates: Friday is the last day of campaigning for the MCD elections in Delhi for which voting will take place on December 4

A key highlight of Modi's public outreach was his roadshow in Ahmedabad on Thursday which BJP sources described as the longest and largest in the country. (Photo: News18)

Prime Minister Narendra Modi said India’s takeover of G20 presidency is one of the biggest opportunities for Gujarat. Addressing a public rally, Modi also attacked Congress and said the party “always prefers family over the country.”

Starting Friday at 5:30 pm, the national capital will observe dry days for three days due to the MCD polls being held on December 4. Sharing highlights from his roadshow in Ahmedabad on Thursday, Prime Minister Modi said “Words cannot describe the love and affection I received from people”. A voter turnout of 60.23 per cent was recorded in the first phase of high-stakes Gujarat assembly Read More

Kejriwal Wiped out Rights of Dalits, Minorities with his 'Jhadoo': Congress

The Congress alleged that Delhi Chief Minister Arvind Kejriwal and his Aam Aadmi Party (AAP) have “wiped out” the rights of Dalits and minorities in Delhi. AICC secretary in-charge of Delhi Ajoy Kumar and Congress’ Delhi unit chief Anil Chaudhary accused Kejriwal of keeping mum whenever issues of atrocities on women, Dalits and minorities came up.

MCD schools to be closed on December 5 following the civil body elections in Delhi. However, classes can be conducted by available teachers in an online mode.

Union Home Minister Amit Shah receives a warm welcome in Vadodara, Gujarat during campaigning for the second phase of the Gujarat Assembly elections.

The BJP attacked AAP chief Arvind Kejriwal for “patronising rioters and the corrupt” as the party’s top leaders wrapped up campaigning for the civic polls on the last day with over 250 ‘vijay sankalp’ roadshows across the city.

Gujarat Elections: The Congress Has become Incorrigible And Disjunct from Realities

The newly appointed chief of the Congress party has not only stoked a heated altercation but also managed to land himself in the middle of a sordid, uncalled-for, and unwanted controversy by calling Prime Minister Narendra Modi “a Ravan with 100 heads”. Kharge slammed the BJP for leaning too much on Modi in every election, addressing a crowd in Ahmedabad’s Behrampura. “We see your (Modi’s) face everywhere, in corporation elections, MLA elections, and MP elections… Do you have a hundred heads like Ravan?” he said. READ MORE

The high-voltage campaign for the December by-poll in the Padampur assembly constituency has intensified as Odisha Chief Minister Naveen Patnaik campaigned for BJD candidate Barsha Singh Bariha. Addressing a public meeting in Jharbandh, he urged people to vote for Bariha and accused the Narendra Modi government of shedding “crocodile tears” for the poor by telling lies. READ MORE

Prime Minister Narendra Modi said the Congress alleging tampering of Electronic Voting Machines is an indication that it has already accepted defeat in the Gujarat Assembly elections. Voting for 89 seats in the first phase of the Gujarat elections took place on Thursday. “The way Congress has started blaming EVMs after yesterday’s voting in Kutch, Saurashtra and south Gujarat, it is evident the opposition party has conceded defeat and has accepted that the BJP will win the election. Alleging EVM tampering is an indication the Congress is on its way out,” said Modi.

Delhi police fully prepared for the MCD elections. Keeping every small detail in mind we have planned the security arrangements. Pre-polls, during the polls and post-polls, three phases will have three different kinds of security deployment: Dependra Pathak, Spl CP, (L&O), Zone-1

The first phase of Gujarat elections for 89 seats saw 5 per cent less polling than in 2017, raising all kinds of theories on who this will benefit or hurt come December 8. READ MORE

MCD Polls: Over 40,000 Delhi Police Personnel to be Deployed

Legislators’ ‘Big Switch’ to Entry of TMC: Meghalaya's Hills Set for 'High Drama' Ahead of 2023 Polls

With just two months to go for the 2023 Meghalaya Assembly polls, political defections and resignation of legislators have begun – at least 18 sitting legislators will or have switched over, even as the entry of the Trinamool Congress (TMC) is set to change the dynamics. READ MORE

We Will Get a Majority in Gujarat Elections: Kharge

Speaking at a rally in Aravalli in Gujarat, Congress President Mallikarjun Kharge said, “We will get a majority in Gujarat elections.”

With Eye on Upcoming Polls, BJP to Hold Two-day Meeting from Monday

Senior organisational leaders of the BJP from across the country will begin a two-day meeting in the national capital to review the party’s preparedness for the coming electoral challenges, including the all-important Lok Sabha elections in 2024. Party sources said the meeting chaired by its national president J P Nadda will take stock of various ongoing organisational works and deliberate on the agenda to reach out to people.

Karnataka Chief Minister Basavaraj Bommai dismissed charges claiming that the names of people from minority communities are being deleted from the electoral roll in the state. These are all lies. Already, the Election Commission has taken note of it. The deletion and addition is done by the Election Commission only,” Bommai told reporters while adding that there are officers appointed by the EC for this purpose.

MCD Polls: DTC Buses From 3 AM on 4th and 7th December in Delhi

Ahead of the MCD elections in Delhi across 250 wards on December 4th, DTC has made necessary arrangements for providing bus services early in the morning starting from 03:00 am on 4th and 7th December (counting day), 2022. These buses will be operated on 35 routes, it said. 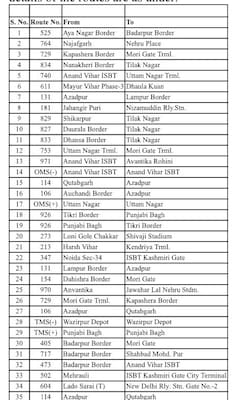 Senior Congress leader Jairam Ramesh on Friday accused the Bharatiya Janata Party (BJP) of raking up the issue of Uniform Civil Code (UCC) whenever there are elections.

“BJP always raises the issue of Common (Uniform) Civil Code when polls are due. This time elections are underway in Gujarat and Himachal Pradesh,” Ramesh told reporters at Sumra Khedi in Agar Malwa district, where the Rahul Gandhi-led foot march reached earlier in the day.

Senior Congress leader Jairam Ramesh on Friday accused the Bharatiya Janata Party (BJP) of raking up the issue of Uniform Civil Code (UCC) whenever there are elections.

“BJP always raises the issue of Common (Uniform) Civil Code when polls are due. This time elections are underway in Gujarat and Himachal Pradesh,” Ramesh told reporters at Sumra Khedi in Agar Malwa district, where the Rahul Gandhi-led foot march reached earlier in the day.

MCD Polls: On December 4, Delhi Metro Services to Start at 4 AM

elections held in 89 out of the total 182 seats across 19 districts of the Saurashtra-Kutch region and southern parts of the state on Thursday. Prime Minister Narendra Modi on Thursday evening led a 30-km-long roadshow through Ahmedabad city where polling will be held on December 5 in the second phase of the Gujarat Assembly elections. During the procession that lasted for more than three-and-half hours, he passed through 14 Assembly constituencies.

The Prime Minister earlier on Thursday hit out at the Congress for likening him to ‘ravan’. “There is a competition in Congress on who says more bad words for Modi…We have to teach them a lesson and the way is to vote for “Lotus” on the 5th (second phase of Gujarat elections),” he said.

The Bharatiya Janata Party (BJP), which has ruled Gujarat for 27 years, is trying to retain power in the state for the seventh term in a row. While leaders of the saffron party including Prime Minister Narendra Modi and Union Home Minister Amit Shah have exuded confidence in a sweeping win with a record number of seats, the BJP faces its traditional rival Congress as well as new poll entrant Aam Aadmi Party (AAP), which has tried to position itself as the main challenger of the ruling party.

Voting for phase two will be held on December 5 and counting of votes on December 8 along with Himachal Pradesh.

With just two days to go for the Delhi civic polls, preparations are in full swing. Increasing visibility, preventing the chances of communal flare-ups and checking candidates from “luring voters” by illegal means will be the focus of Delhi Police.

Noting heightened political posturing ahead of the elections, Special Commissioner (Law and Order) Dependra Pathak said the eight districts under his zone — extending from Singhu to Ghazipur — covered a major chunk of the population in the national capital. As a result, the area has come under increased focus from various political parties, he said.

Meanwhile, starting Friday, the national capital will observe dry days for three days due to the MCD polls being held on December 4. Other than that, December 7, counting day, will also be a dry day.

The AAP, which has emerged as the strongest contender to the ruling BJP, is confident of leaving its mark. Delhi CM and AAP leader Arvind Kejriwal said, “People have given a lot of love to the party, people are watching the work done by AAP and are confident of the party. In the past 15 years, BJP has not left any stone unturned when it comes to corruption. The whole of Delhi has turned into a garbage yard. People are watching. They feel that the time has come to remove BJP from MCD and give one chance to the AAP.”

The BJP, which has held the post for 15 years, is also not leaving any stone unturned in its campaigning. Senior BJP leaders including Union ministers and chief ministers of party-ruled states on Wednesday held around 100 roadshows and public meetings across Delhi to woo voters.

The ‘Vijay Sankalp’ roadshows by senior leaders were taken out across the city from 14 places, it said.