Riding on Narendra Modi’s popularity and nationalism, the BJP is depending on upper caste votes, non-Yadav OBCs and young voters to win in Etawah.

On entering Ajeet Nagar, a small colony of Dalit community in Etawah, one gathers a sense how strongly Mayawati has glued the alliance of her party Bahujan Samaj Party (BSP) with Akilesh Yadav’s Samajwadi Party (SP) in Uttar Pradesh.

“Bahenji (Mayawati) has ordered us and we will comply. Even if she asks us to vote for a wood stick, we will do that,” says Ateesh Babu, 52, who runs a small grocery shop in this area. “We all vote en masse and this time we will vote for the alliance candidate,” he adds.

In Etawah, stage is set for a keen multi-cornered contest and many believe that only a few thousand votes will separate the winner from loser. While this constituency has been an SP bastion, the BJP snatched the seat from the Yadav clan in 2014. Akhilesh Yadav now depends on Mayawati’s Dalit voters to secure victory for his candidate. For the Yadav family, it’s a prestige issue and both Akhilesh and SP supremo Mulayam Yadav earnestly want to redeem this fort.

Etawah is a reserved constituency where BJP has fielded its sitting MP from Agra, Ram Shankar Katheria. The party dropped the 2014 winner Ashok Dohare, who in protest joined the Congress, and is contesting against Katheria. The SP-BSP alliance has young Kamlesh Katheria, son of former MP, as Samajwadi Party candidate. Akhilesh’s estranged uncle, Shivpal Yadav, has also fielded one Shambhu Dayal Dohare, whose presence has added confusion in this contest.

“The vote of alliance will divide and BJP will win Etawah,” says 26-year-old Mohit Chaturvedi, who is a BJP voter but admits that Mayawati’s call to vote for ‘bicycle’ (SP election symbol) has given much needed strength to the Samajwadi Party.

Being a reserved seat, all candidates are hopeful of getting a good chunk of Dalit votes in Etawah. Riding on Modi’s popularity and nationalism, the BJP is depending on upper caste votes, non-Yadav OBCs and young voters. The BJP supporters know that this is tough contest but hope to eventually snatch victory. Samajwadi Party is worried that Congress candidate Ashok Dohare may cut its “secular votes.” Shivpal Yadav can also dent the alliance candidate by using his “personal rapport” with the voters of Etawah.

“Shivpal is canvassing for his candidate Shambhu and we believe this is bad news for Akhilesh,” says Satyendra a taxi driver who has made up his mind to vote for the alliance.

In such a scenario, the BSP voter becomes a very important factor for SP candidate Kamlesh Katheria -- how intact the voters remain and how aggressively they vote for him will decide his fate. 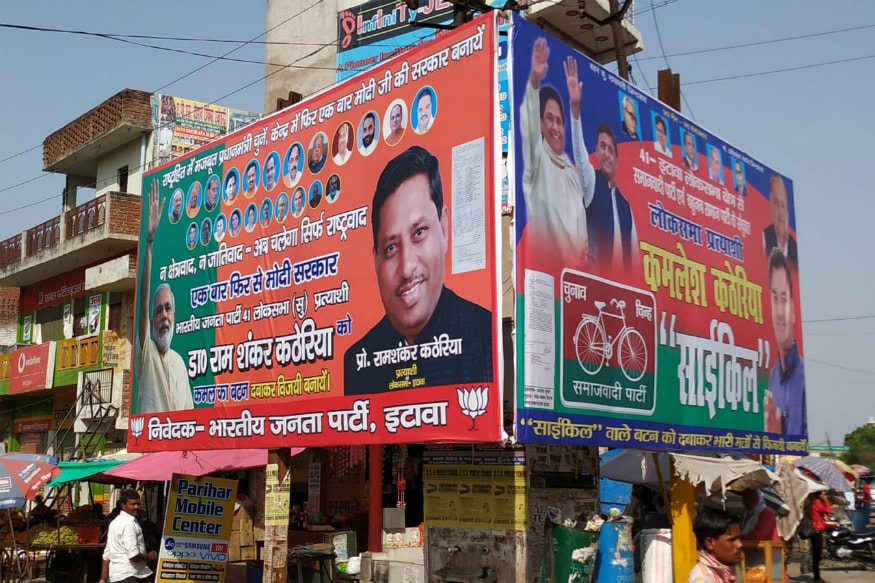 Just 22 kilometers from Etawah, Akhilesh’s village Saifai is hopeful and upbeat that SP-BSP supporters are working together and will win maximum seats in UP. “People suspect that votes between SP and BSP won’t transfer (to each other) but this is a very different election. Did you notice how Mayawati ji came here for a joint show with Neta ji (Mulayan Singh) and Akhilesh?” points out Aditya Yadav, 24, grandson of village Pradhan Darshan Singh. Pradhan Darshan has remained a lifelong aide and trusted lieutenant of Mulayam Singh.

Mulayam Singh is contesting from Mainpuri and Mayawati’s joint show with him is believed to have been conducted to avoid confusion among the voters. There has been a friction between the cadre of Samajwadi Party and supporters of BSP since long. The attack on Mayawati in 1995 by SP supporters –termed as the infamous guest house episode – had caused a rift between the two. However, in an unusually demanding situation, the arch rivals have come together to take on the BJP in Lok Sabha elections.

“Last time, Bahen ji could not win a single seat. She knows the importance of helping Samajwadis this time. We are all helping her to become powerful because ever since BJP came to power, Dalits have suffered the most,” explains 40-year-old Dinesh Kumar, member of Jatav community and resident of Azamgarh. “It is a battle for survival where give and take matters,” adds Kumar, who works in Saifai as a hospital attendant.

Uttar Pradesh has completed voting in 26 seats until now and 13 seats will be going to polls on Monday. The Samajwadi Party is contesting 7 of these seats and BSP is fighting 6. The BJP holds 12 of them. Clearly, this is the time when SP and BSP need each other more than ever and Etawah reflects this urgency.