Parliament LIVE updates: After a long day of debates, arguments and counter arguments, the Centre's 10% quota bill for the economically weaker from the General category was put to vote in the Lok Sabha and was passed with overwhelming majority.

Parliament LIVE updates: After a long day of debates, arguments and counter arguments, the Centre’s 10% quota bill for the economically weaker from the General category was put to vote in the Lok Sabha and was passed with overwhelming majority.

Prime Minister Narednra Modi was in the House when the voting took place.

Earlier, coming down heavily on the government, AIMIM chief Asaduddin Owaisi on Tuesday said the quota bill, which seeks to grant 10 percent reservation in jobs and employment to upper castes, is a fraud on the Constitution. Owaisi pointed out that the Constitution does not recognise economic backwardness and that it is an insult to Ambedkar. The original purpose of the reservation was to give social justice and remove social and educational backwardnesss, he added. Before him, Ram Vilas Paswan and Upendra Kushwaha batted for reservation in thge private sector as well.

Soon after the quota bill was passed in the Lok Sabha, BJP chief Amit Shah expressed gratitude towards the government for taking the initiative for the upliftment of economically weaker sections.

CLICK TO READ | Today a Test For Every Political Party That Supported Quota For the Poor, Says Arun Jaitley 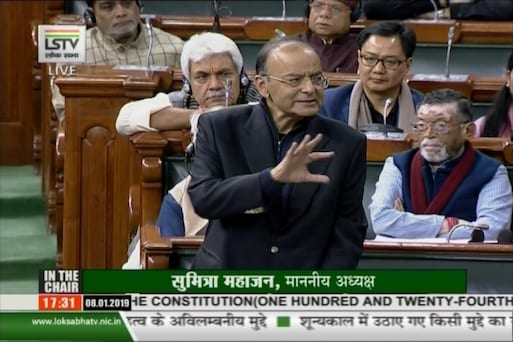 Rejecting suggestions that the measure may fall foul of a Supreme Court judgment that put a cap of 50 per cent at the total quota, he said the ceiling was for caste-based reservations only.

Meanwhile, AIADMK MP Thambidurai walked out of the House.

Lok Sabha to vote on general category quota bill in a short while. The debate over the bill took the house by storm during the day.

CLICK TO READ | 'One Brother May be Rich, The Other Poor': Experts Point Out Flaws in Quota for Upper Caste EWS 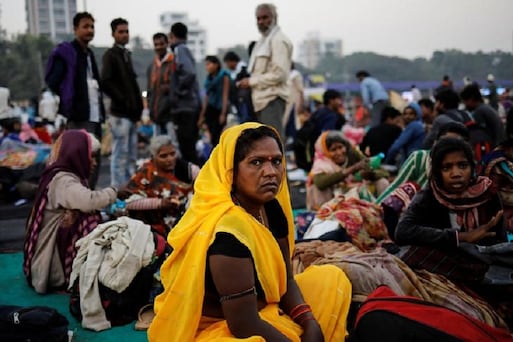 The quota, for which the government moved Constitution (124th Amendment) Bill in the Lok Sabha on Tuesday, is likely to be availed by those whose annual income is below Rs 8 lakh and those who have not more than five acres of land.

The opposition has raised key points over EWS quota. It said that there is no definition or mention or economic weaker section in the Constitution of India. It also expressed concern over the 50% ceiling. It also demanded the establishment of the All India Judicial Services and the inclusion of reservation in the examination and called for a caste census conducted and make the population of SC, ST, OBC public.

"This bill is a fraud on the constitution and an insult to Ambedkar. The  purpose of reservation was to give social justice and  remove social and educational backwardness. The constitution does not recognise economically weaker section," Owaisi said.

Upper caste was always anxious in my constituency that reservation never benefited them," said Upendra Khushwaha of RLSP said in the Lok Sabha, adding that this move will be helpful. He, however, said that unemployment is yet to be resolved. "We suggest that some changes be made to this bill. Preferance should first be given to those who studied in government schools," Khushwaha said.  Khushwaha also demanded that session be extended for two days and pass the All India Judicial Services too because everyone supports it too.

The TMC questioned the government over the reservation to general category. "Why does the Government not take up the women reservation bill with the same priority as this quota bill? This bill is not only about jobs, but also about misleading the youth with false hopes and fake dreams," Sudip Bandyopadhyay of TMC said.

The TMC has termed the reservation bill as a "fake dream". "This bill appears as a political messaging. It misleads with false hopes of this country, this bill is promising a fake dream which will never become a reality sans the seriousness of the government. It must be referred to a joint select committee. when sky rocketing unemployment is shaking the country, we cannot keep calm," the TMC said.

AIADMK  has demanded the reserved ceiling be increased to 70 percent. "Bring constitution amendment. 9th Schedule immunity is not a permanent remedy," Thambidurai said.

"It seems welfare programmes of the govt have failed that govt has brought reservation provisions for EWS," said Thambidurai of AIADMK over the reservation for EWS of general category.

Jaitley said the communists should also back the general category quota as it concerns the poor. "If communists oppose the billwhich is in the favour of the poor, it would be the first example of its kind," Jaitley quipped.

Govt has said that the reservation for EWS will not violate the 50% cap. "The states tried to do this through an act or an notification. But what was the source of the power? It was Article 15 and Article 16. But then reservation was only for socially and educationally backward caste and SC ST,"  Jaitley said. " After Indira Sawhney verdict it was stated that social and educationally backwardness is determinant of the caste. but there was no provision for Economically weaker section int he constitution. hence it always failed the legal test. the 50% cap by the court is only for Article 16 (4) stating caste based reservations." he added.

"Public employment which includes state jobs, PSUs and state instrumentalities will now include the EWS too," Jaitley added. Jaitley also said that the quota will include all educational institutes.

Taking a jibe at the Congress, Jaitley said that the "reservation jumla" was in Congress manifesto.


Arun Jaitley reiterated that the reservation for economically weaker sections is aimed at equality.

"There were a lot of governments who attempted to do this but got entangled in legal webs. For amendments in Part 3 of the constitution it does not need ratification from states. When Article 15(5) was amended, the phraseology was same for caste based reservation, this phraseology is also the same," Finance minister Arun Jaitley.

"The bill says that whether aide or unaided, open category can claim reservation if EWS.  But for SC, ST and OBC, the reservation is only for aided. Why deprive the SC, ST , OBC from unaided  institutes?" KV Thomas said.

"It will give great relief to people who have annual income less than Rs. 8 lakhs. Crores of young people will have benefits from this reservation in education & jobs. The reservation of 50% for SC, ST & OBCs remains unaffected due to this decision." BJP chief Amit Shah said while congratulating PM Modi for introducing the bill.

We support the quota bill. We are not against this, but the way it is being brought raises questions on your sincerity. My request is to send this to JPC first,"  KV Thomas, Congress said in the Lok Sabha.

"It will give great relief to people who have annual income less than Rs. 8 lakhs. Crores of young people will have benefits from this reservation in education & jobs. The reservation of 50% for SC, ST & OBCs remains unaffected due to this decision." BJP chief Amit Shah said while congratulating PM Modi for introducing the bill.

Thawar Chand Gehlot introduces quota bill in Lok Sabha. Gehlot said that the reservation will benefit the poor, irrespective of the religion, outside the purview of reservation. He has termed the decison as historic.

The Citizenship Amendment Bill 2019 has been passed in the  Lok Sabha.

"It is the central government's responsibility to protect the identity, culture of the Assamese people," Rajnath Singh said in Lok Sabha.

Seen here is the voting board in the Lok Sabha.

Earlier today, the NDA government introduced a bill in Lok Sabha that seeks to amend the Constitution to provide so that it can provide reservation to economically backward section in the general category.

Union social justice minister Thawar Chand Gehlot said that all those outside of the purview of the reservation system till now, will be able to avail benefit of the ‘EWS’ quota irrespective of their faith, and claimed that the introduction of this bill was proof that the Narendra Modi government was committed to its ‘Sabka saath, sabka vikas’ motto, as was espoused by Narendra Modi before the 2014 elections.

Earlier, the Lok Sabha passed the controversial Citizenship Amendment Bill after a marathon debate that lasted close to three hours and saw the Congress and the TMC walk out in protest. It seeks to provide Indian citizenship to non-Muslims from Bangladesh, Pakistan and Afghanistan. Speaking on the bill, Home Minister Rajnath Singh said it will pave way for the religious minorities – the Hindus, Jains, Christians, Sikhs, Buddhists and Parsis – from these states to get Indian citizenship.

Introduction of the bill was vehemently objected to by the opposition. The Congress said many states have opposed the bill and it should be sent to a select committee. With Speaker Sumitra Mahajan not heeding to the demand, the Congress staged a walkout. TMC’s Saugata Roy dubbed the bill as “divisive” and “insidious” and said it goes against the basic tenets of the constitution.

The legislation has resulted in protests, primarily in Assam and several parts of north-east India. BJP’s ally in the state, the Asom Gano Parishad has withdrawn support from the state government over the issue, whereas the Shiv Sena and the NDA too have opposed the legislation. Seeking to assuage concerns, the Home Minister said: “The burden of illegal immigrants will not borne by Assam, it will be shared by different states”.