News18» News»Politics»Fact-check: No, Kanhaiya Kumar Did Not Campaign Alongside An Image of Afzal Guru
2-MIN READ

Fact-check: No, Kanhaiya Kumar Did Not Campaign Alongside An Image of Afzal Guru

In the image that was shared hundreds of times on Facebook, Kanhaiya Kumar is seen campaigning alongside an image of the Kashmir separatist leader, Afzal Guru.

A photo of CPI's Begursarai candidate Kanhaiya Kumar has been shared hundreds of times in Facebook and Twitter posts which shows him campaigning in the ongoing elections alongside an image of Afzal Guru. The claim is false; the image has been doctored to include the Kashmiri separatist leader’s photo instead of a symbol for the Communist Party of India. 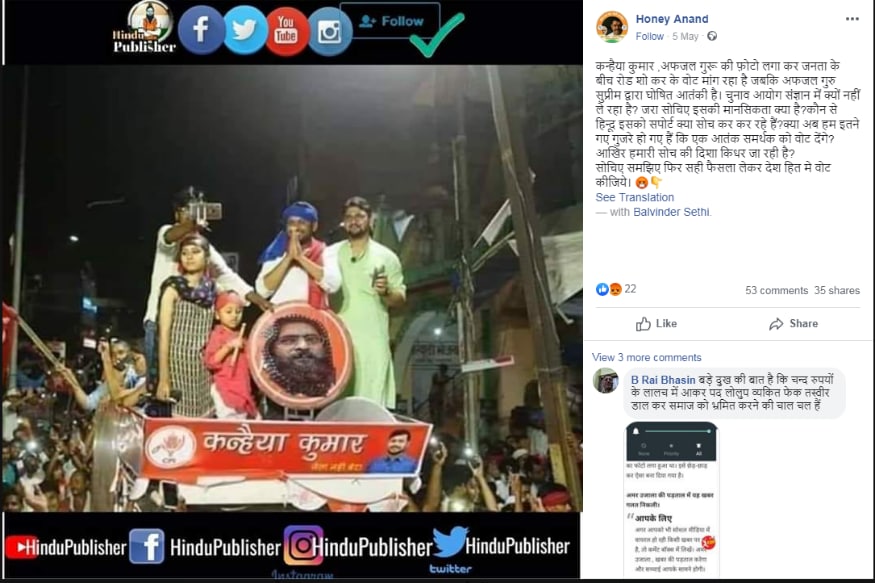 The Hindi language caption alongside the photo in the misleading post translates to English as: “Kanhaiya is doing roadshow and seeking votes with an image of Afzal Guru, who is convicted for terrorism by the Supreme Court. Why isn't the election commission is taking notice of this? Think what is his mentality? Who are the Hindus supporting his and what are they thinking? Are we so forsaken that we will vote for a terror-supporter? In what direction we are thinking? Think, understand and then take a right decision to vote in the interest of the country.”

The same photo was shared on Facebook here, here and here, and on Twitter here and here with a similar claim.

But the claim is false; the image has been doctored to include the Kashmiri separatist leader’s photo instead of a symbol for the Communist Party of India.

The Hindi language caption translates to English as: “Glittering straws of lies disappears when people take to streets. Today this was the scene of Begusarai, tomorrow it will of the whole country. Look at how the public's skyrocketing excitement was in today's mobile torch rally.”

In the original photos shared by Kanhaiya Kumar, the initials “CPI” refer to the Communist Party of India, while the ears of corn and a sickle represents one of the party’s logos.

Here is a recent statement issued by the CPI chief and published on the party’s official website that shows the symbol.

Below is a screenshot of the image: The original photos posted by Kumar show him campaigning in the Begusarai district of Bihar.

Here is a video report by Hindi TV channel channel ABP news published on April 27, 2019, about the rally.