Goa Chief Minister Pramod Sawant won the Sanquelim Assembly seat as the celebrations began at the BJP office in Goa on Thursday.

Goa Chief Minister Pramod Sawant won the election from his traditional Sanquelim Assembly constituency on Thursday and expressed confidence that the BJP will form government in the coastal state.

In early trends on Thursday, the Bharatiya Janata Party has taken a lead over Congress in 19 seats, leaving behind Congress which is leading in 15 assembly seats. The counting of votes for the election to the Goa assembly began on Thursday Read More

Dr Pramod Sawant  addressed the meeting of newly elected MLAs of BJP Goa in the presence of Goa Election In-Charge Shri Devendra Fadnavis, Shri C T Ravi, Shri Kishan Reddy Gangapuram, Union Minister Shri Shripad Naik, State President Shri Sadanand Shet Tanavade and others. He also congratulated all the newly elected MLAs of BJP Goa and reiterated that they are committed to all round development and shall continue to work for the prosperity of the state. 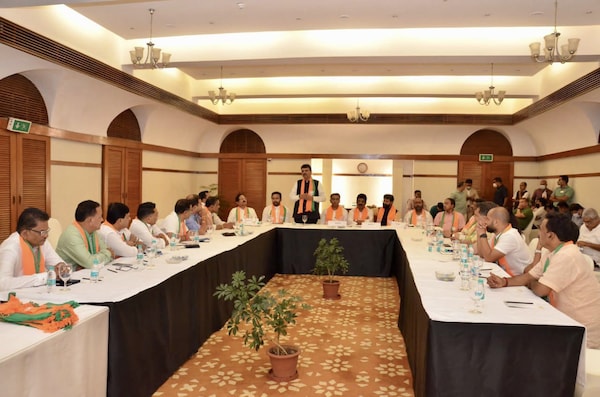 Once again people have trusted the Double Engine Sarkar under the leadership of Hon’ble PM Shri @narendramodi ji and given clear mandate in #Manipur, #Uttarakhand, #UttarPradesh & #Goa for all round development. pic.twitter.com/MT8STyOkaS

Celebrations outside BJP office in Guwahati

All Exit Polls Have Been Proved Wrong in Goa, Says PM Modi

All exit polls have been proved wrong in Goa…BJP has scripted new history in Uttarakhand- for the first time a party has come for a second consecutive term in the state: PM Modi on Assembly results in 5 states- UP, Uttarakhand, Manipur, Goa and Punjab. The election results have put a stamp on the schemes launched by PM Modi. People have continuously voted for BJP. Since 2014 people are blessing BJP. This is the first time that a Chief Minister came into power again in UP. We’re making a hat-trick in Goa: BJP president JP Nadda 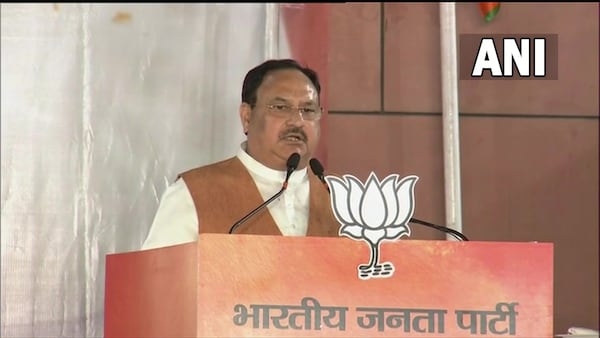 Goa Chief Minister Pramod Sawant won the election from his traditional Sanquelim Assembly constituency on Thursday, and expressed confidence that the BJP will form government in the coastal state. READ MORE Our central parliamentary board will send observers to Goa tomorrow and after that during our legislature meet, we will go to the Governor. Congress wanted to go today at 3 pm but didn’t since they don’t have numbers.

We Are Forming the Govt in Goa, Asserts Fadnavis

We’ve won 20 seats. MGP has also given us a letter of support. 3 independent MLAs have also supported us. So now we are 20+3+2 =25. There is a possibility that more candidates will join us. So we are forming the govt: BJP leader Devendra Fadnavis 3 independent MLAs have given us their letter of support, so we will form the government with full majority: Goa BJP president Sadanand Shet Tanavade We Will Prove Our Strength on the Floor of the House, Says C T Ravi Narendra Modi’s mission of Aatmanirbhar has actualized in Goa. I want to thank the people of Goa. We lost 3 seats by very low margins. This win is because of Narendra Modi and his vision and also J P Nadda and others. After 10 years, we have still managed to form the government, Says Pramod Sawant

'Grateful': Amit Shah Thanks Voters in Goa for Reposing Faith in BJP

Grateful to the people of Goa for reposing their faith in the BJP.

BJP under the leadership of PM @narendramodi Ji will leave no stone unturned in fulfilling the aspirations of our sisters & brothers of Goa. 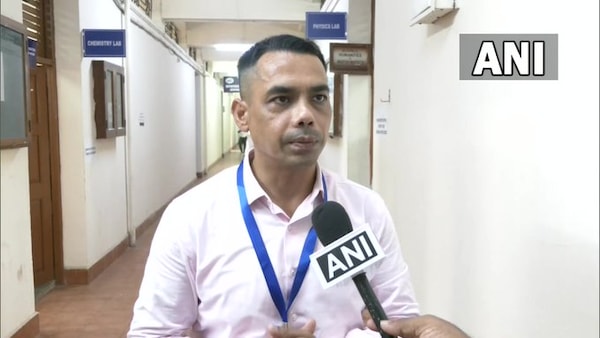 All Exit Polls Have Been Proved Wrong in Goa, Says PM Modi

'Grateful': Amit Shah Thanks Voters in Goa for Reposing Faith in BJP

Have Been Given a Grand Entry in Goa in 1st Attempt, Says Manish Sisodia

It is Advantage BJP in Goa as AAP, GFP, MGP Spoil Congress' Chances

Cong Will Form Next Govt in Goa with Help of Other Parties; It's Premature to Say BJP Has Won: Sequeira

People of Goa Have Given Us a Clear Majority, Says Devendra Fadnavis

Goa Congress Calls for Important Meeting at 1 pm in Margao

Goa Election Results 2022: What is a Hung Assembly?

morning. Goa Chief Minister Pramod Sawant said if numbers fall short, the BJP will take help of other parties. With exit polls predicting a hung assembly, Congress said it is open to forging an alliance with Mamata Banerjee-led Trinamool Congress (TMC) and even promised ministry to Arvind Kejriwal’s Aam Aadmi Party (AAP). Chief Minister Pramod Sawant, however, exuded confidence in BJP winning a third straight term with more than 22 seats in the 40-member House in the 2022 Vidhan Sabha election results.

As many as 302 candidates were in the fray, with the state voting in a single phase on February 14. More than 11 lakh voters cast their ballot to elect the next government in the popular coastal state. While the BJP entered the elections with the slogan ’22 plus in 2022′, CM Sawant said that even if the party is stuck at 17-18 seats, it would seek help from Independent MLAs to form a government.

Meanwhile, the Congress, fearing a repeat of the 2017 fiasco, shifted all the candidates, who had contested the polls, to a luxury resort in Bambolim village near Panaji a day ahead of the counting. The BJP also held a meeting with senior leaders to discuss possible outcomes.

The Goa Congress has been in touch with AAP candidates and has promised ministry in case they win, sources told CNN-News18. The grand old party is also in touch with the Trinamool Congress, sources added.

In the 2017 Goa election, internal tensions and slow decision-making under the leadership of senior Congress leader Digvijay Singh led to the party losing its opportunity to form the government, despite emerging as the single largest party by winning 17 seats. The BJP had bagged 13 seats and was quick to tie up with Maharashtrawadi Gomantak Party (MGP), Goa Forward Party (GFP) and Independent MLAs to form a government under the leadership of four-time chief minister and former defence minister Manohar Parrikar.

Since 2017, Goa’s political space has spiced up with the entry of players like TMC and AAP. This time, Congress went to the polls after firming up a pre-poll alliance with the GFP, while the TMC joined hands with the MGP. The Shiv Sena and Nationalist Congress Party (NCP) also joined hands in Goa, while AAP and the BJP are fighting it alone.

The counting of votes of all the constituencies would be taken at one go, starting from ballot papers at 8 am. North District Returning Officer Ajit Roy said strongrooms, where EVMs have been kept, will be opened at 6.30 am, but the actual counting will start at 8 am.

Double Covid-19 vaccination certificate has been made compulsory for entering counting centres, where three layers of security will be in place. A senior official told PTI elaborate arrangements have been made at both the counting centres and all the results are expected by around noon.

In case no government is formed, President’s Rule could be imposed by the state governor under Article 356 of the Constitution. Re-election could also take place.