GUJARAT ELECTION LIVE UPDATES: The Bharatiya Janata Party (BJP) seems set to form the governments in Gujarat and Himachal Pradesh — for the sixth time in the former and unseating the Congress in the latter. As per trends, the BJP is leading in 99 seats in Gujarat, while the Congress is ahead in 77.

GUJARAT ELECTION LIVE UPDATES: Prime Minister Narendra Modi on Monday credited Gujarat and Himachal victories to 'vikas'. "Jeeta vikas, jeeta Gujarat," tweeted Modi after it became clear that BJP will form the government in both the states. BJP president Amit Shah also said that it was Modi's vikasvaad which trumped Congress' jaativaad. Chief Minister Vijay Rupani registered a win in Rajkot West and so did Deputy CM Nitin Patel in Mehsana. Dalit activist Jignesh Mevani has scored his maiden election victory from Vadgam. In Himachal Pradesh, the electorate has ‘swung’ again, bringing the BJP back to power and sending the Congress in opposition. BJP's CM candidate in Himachal lost his election. Counting is underway for the Gujarat election result 2017 and Himachal Pradesh election result 2017 at 37 centres in Gujarat and 42 booths in Himachal Pradesh. The result has been pitched as a prestige battle between Prime Minister Narendra Modi’s popularity and Congress President Rahul Gandhi’s leadership.

This is a blessing by the people to the leadership of PM Modi and his government. It shows that they support his vision for development and the vision for the future of India: Railway Minister Piyush Goyal on verdict

In tribal-dominated Dangs, Congress managed a slender margin of 768 over the nearest rival BJP while in Kaprada, another ST seat, the Congress sneaked victory by a mere 170 votes. However, there were at least eight seats, where Congress candidates trailed their nearest rivals by less than 2,000 votes, including in Godhra where BJP's C K Raulji won by just 258 votes. In the Dholka constituency, Congress lost by a margin of 327 votes. Significantly, in this seat, the BSP and NCP bagged 3139 and 1198 votes respectively. Similarly,  at the Fatepura seat, where BJP won by a margin of 2,711 votes over the Congress, the NCP candidate got 2747 votes. Congress lost the Botad seat by a margin of 906 votes where BSP bagged 966 votes. Three independents collectively got around 7,500 votes. The BJP had its share of narrow misses as well. Apart from the Kaprada constituency, the party lost the Mansa seat by a vote of 524 votes and the Deodar seat by 972 votes.

At least 16 seats in Gujarat witnessed a nail-biting finish with a victory margin was less than 2,000 votes and of just about 200 votes in a few. In seats like Dholka and Fatepura, smaller parties like NCP and BSP ate into the crucial votes, snatching of near-certain victories from the Congress. The independents also scored big in some seats. The assembly seats to have seen a photo-finish included Himatnagar, Porbandar, Vijapur, Deodar, Dangs, Mansa and Godhra.

Actor Prakash Raj congratulated the BJP for its win in the Gujarat polls but asked why it could not achieve its target of more than 150 seats. "Weren't you supposed to sweep with your VIKAAS? What happened to 150+..?" he tweeted. "Our country has bigger issues than Pakistan, religion, caste, supporting fringe groups that threaten... and the ego of settling personal scores. There are genuine rural issues."

BJP MP Sanjay Kakade, who hogged the headlines for predicting a dismal show by his party in the Gujarat elections, had to eat his words after it won a majority in the 182-member state Assembly.An embarrassed Kakade said he had not factored in the impact of Prime Minister Narendra Modi's "charisma" while making the prediction. "Modi's charisma did the trick. Modi is the real hero and I am zero," he said.

Congress has gained momentum and put ruling party on the defensive. What Rahul Gandhi essentially did by calling janehudhari Hindu is to neutralize the Hindutva argument of the BJP: Shashi Tharoor

This is not an ordinary victory. It's special. Some people can't digest BJP victory, don't waste your time on them. Focus on New India by 2022: Modi

Some people tried to divide Gujarat on caste lines. They will still continue to do that. We need to unite and continue to be an example for the rest of the country: Modi

30 years ago, society was divided because of poison of casteism. It took 30 years of efforts by workers like me that development because the focus of Gujarat. But some people tried to again sow seeds of casteism in the past few months. People of Gujarat must be aware going onwards. Despite their support, I am asking Gujarati brothers and sisters to forget whatever happened during elections and unite again: Modi

The truth is that since 2014 Lok Sabha election, this country is hungry for development. Whether you like BJP or not but no one will be allowed to derail India's development. When India is voting for development election after election and we have a government which means well and has courage to take decision, which believes in collective leadership, which believes in Sabka Saath-Sabka Vikas... Then take today's verdict as another stamp by people of Gujarat and HP: Modi

So many conspiracies were hatched in Gujarat by Congress, misinformation was being spread. People cannot bear if anyone makes fun of 'vikas': Modi

There might be people who would like to see BJP lose. But if a party keeps winning election after election, then they must recognise what people of India want.The truth is that since 2014 Lok Sabha election, this country is hungry for development. Whether you like BJP or not but no one will be allowed to derail India's development: Modi

For me, Gujarat victory is a matter of personal happiness. Because usually parties lose after the leader move out. There were attempts to demoralise people. But I'm delighted that BJP workers have led Gujarat after I left my home state of Gujarat. Gujarat is still marching towards progress. I congratulate leaders of Gujarat BJP from the bottom of my heart. People of Gujarat were being targeted from all side. Hidden forcing were working for Congress. They were plotting to somehow remove Modi's party. They even mocked Vikas. India will never accept it: Modi

The results in Himachal Pradesh show that if you don't do development and are embroiled in all wrong acts then after five years, people will not accept you. In today's situation, when a government comes after five years is hailed as a miracle. Gujarat is an exception in terms of anti-incumbency. It has supported BJP and its allies since 1990s. Even after I left Gujarat, the party has managed to hold on the state: Modi

Today, common man has several dreams. Himachal Pradesh results have shown that if you indulge in corruption then people will reject you: Modi

I bow down before the people of Gujarat and Himachal as they chose the path of development. The nation has rallied in support of Demonetisation and GST: Modi

Narendra modi greets party workers at the BJP headquarters. Saying that they had a part to play in the victories in Himachal Pradesh and Gujarat. he also thanks the people of the two state for voting the party into power.

With Bharatiya Janata Party (BJP) back in power for the sixth straight term in Gujarat and taking Himachal away from the Congress, the party now controls 19 of the 29 states.

CLICK TO READ | With Gujarat and Himachal in Its Bag, BJP Now Controls 19 of the 29 Indian States 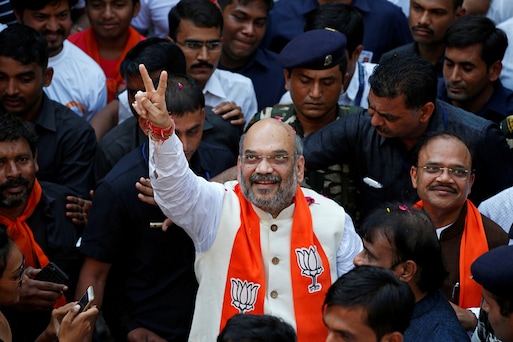 Prime Minister Narendra Modi has arrived for the BJP parliamentary meeting to discuss the election results in Gujarat and Himachal Pradesh, where he was greeted by BJP president Amit Shah. According to the real-time data released by The Election Commission of India, a total number of 550607 voters chose not to vote for any of the party during the elections.

Click to Read | No Candidate Good Enough: More Than Half a Million People Press NOTA in Gujarat 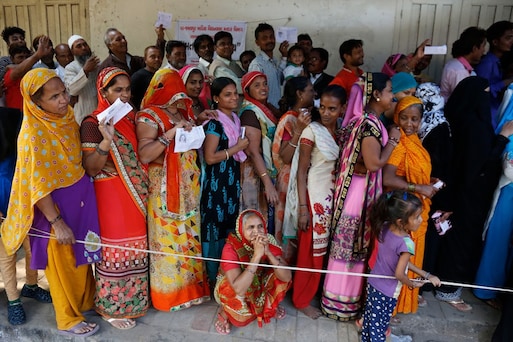 The vote share of NOTA in Gujarat elections, which stands at almost 1.8% of the electorate at the time of filing this report, is higher than that of parties such as the Bahujan Samaj Party (BSP), the Bhartiya Tribal Party (BTP) and the Nationalist Congress Party (NCP).

While the BJP is set to form a government in Gujarat, and the Congress is boasting about a ‘moral victory’, these elections have thrown up another winner: NOTA. In what could have changed the fortunes of the Congress party in the tight battle of Gujarat, almost half a million voters of the state chose to press the NOTA button during the elections.

Despite the BJP winning in Himachal Pradesh, outgoing chief Minister Virbhadhra Singh of the Congress mananged to win from Arki constituency. We are sad about Prem Kumar Dhumal losing but we are happy that people of Himachal Pradesh voted for BJP: Union Minister Dharmendra Pradhan

After winning in both Himachal Pradesh and Gujarat, BJP-led coalitions are now in power in 19 states. It's a symbol of people's confidence in Congress. Thankful that they made me victorious. We have never stepped back from serving people in Sujanpur & we will always serve them: Rajinder Rana, Congress candidate who won in Sujanpur against BJP's Prem Kumar Dhumal.

With the BJP looking set to win Gujarat and Himachal Pradesh elections, Prime Minister Narendra Modi may become "more dictatorial", CPI general secretary S Sudhakar Reddy said. The Left leader said he now expected the BJP to pursue the "Hindutva policies" more vigorously. "Narendra Modi may become more dictatorial. It is not a positive sign for Indian democracy," Reddy said. The CPI leader said although the Congress improved its tally in Gujarat, the ruling party (BJP) could overcome "anti-incumbency", and that it was a pity that "secular forces" could not defeat the saffron party.

'Congratulations BJP on winning the elections in Gujarat and Himachal Pradesh. Wishing them all the best for their forthcoming tenure in governance', tweets Andhra Pradesh CM N Chandrababu Naidu ​

Vadnagar is divided among two Assembly constituencies in Mehsana district — Kheralu and Unjha. While BJP candidate Shankarji Dhabi won the Kheralu seat by polling 49,241 votes or 40.01% of the vote share, Lalludas Patel ceded the bastion of Unjha to Congress candidate Dwarkadas Patel, who polled 74,438 votes or 54.23% of the vote share.