Congress president-elect Rahul Gandhi, Prime Minister Narendra Modi and other senior leaders of the BJP and Congress gather to mark the anniversary of the 2001 attack on Parliament, on Wednesday. (AP Photo/Manish Swarup)

As per the Election Commission guideline for the media, TV channels can't broadcast anything related to the elections after 5 pm of December 12.

New Delhi: The Election Commission issued a showcause notice on Wednesday to Congress President-elect Rahul Gandhi after TV channels in poll-bound Gujarat aired his interview in alleged violation of the Model Code of Conduct (MCC).

"Explain why action should not be taken against you for violating provisions of MCC, failing which Commission will decide matter without any further reference to you," said the notice issued to the Congress scion on the eve of the second and final phase of voting in Gujarat. 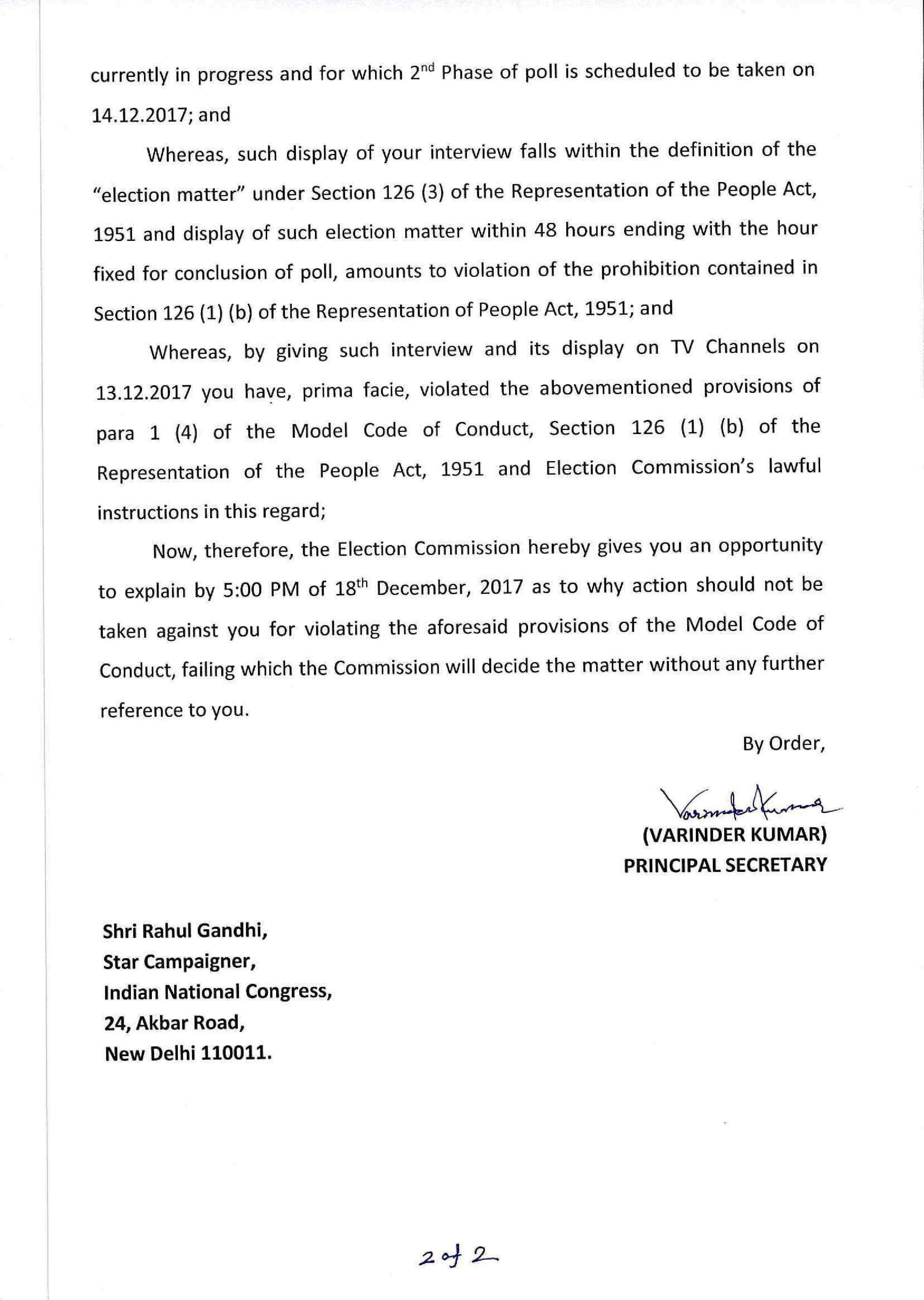 The poll panel also directed the Chief Electoral Officer of Gujarat to file an FIR against TV channels in the state that aired the interview.

“Such display falls within the definition of “election matter” under Section 126 (3) of Representation of the People Act, 1951 and display of such election matter within 48 hours ending with hour fixed for conclusion of poll in the poll going areas, amounts to violation of Section 126 (1)(b) of Representation of the People Act, 1951,” a press release by the EC said. As per the Election Commission guideline for the media, TV channels can't broadcast anything related to the elections after 5 pm on December 12.

The interview became the latest flashpoint between the BJP and the Congress, with the latter accusing Gujarat Chief Minister Vijay Rupani and Union Minister Piyush Goyal of “threatening” journalists in the name of poll code.

The Gujarat Pradesh Congress Committee (GPCC) even filed a police complaint against FICCI chief Pankaj Patel for delivering a speech in praise of PM Narendra Modi at the industry body's 90th AGM in the national capital on Wednesday evening. Congress in-charge of communications department Randeep Surjewala, who led a party delegation to the EC office, said the same rule should apply to the PM, Finance Minister Arun Jaitley and BJP chief Amit Shah as well. "Why didn't the EC do anything when the FICCI chairman made a pro-Modi speech today? Action should also be taken against the PM for holding the Mann ki Baat radio programme during elections."

"If Arun Jaitley can release the BJP vision document a day before Phase 1 voting, should he not be booked for model code of violation? If Amit Shah can make poll-related statements in Ahmedabad, should be not be booked? We appealed to the EC to not show double-standard in applying rules," Surjewala told reporters outside the EC office.

Congress delegation submitted a memorandum to ECI demanding immediate registration of FIR against BJP leaders in the context of them violating the model code of conduct.If FIR can be registered against news channels for telecasting Rahul ji's interview then why not against BJP? pic.twitter.com/AbOzlUU1R2— Randeep S Surjewala (@rssurjewala) December 13, 2017

"We strongly condemn the BJP and its leaders for their arrogant behaviour, for their unconstitutional attitude. We warn the BJP that they cannot impose such restrictions on the media as there is still rule of democracy in the country. We urge the Election Commission to take note of these threats and initiate action against BJP leaders," he told reporters.

Alleging that the BJP leaders were now acting as "chief electoral officers", he said that the party demand that the EC register cases against them for "conspiring to tarnish the poll body's name".

Surjewala said it was for the Election Commission to decide whether someone has violated the model code of conduct or not and BJP leaders cannot threaten anyone over it. He also said that during the 2014 Lok Sabha elections, Prime Minister Narendra Modi gave an interview to a channel a day prior to voting.

The Congress leader also referred to the BJP releasing its manifesto a day ahead of the first phase of polling in Gujarat on December 9.

The BJP has complained to the EC about the airing of the interview after which Gujarat's Chief Electoral Officer BB Swain said a report will be submitted to the Election Commission.

While the BJP claimed that airing of interviews was a "clear violation" of the poll code, Swain said the rules and guidelines prohibit campaigning in the 48-hour period before the end of polling do not amount to a "gag order".

"There are rules and guidelines which ban broadcasting of certain election-related content on TV during 48 hours... But we cannot call it a gag order," Swain told reporters.

"Yes, we have received a complaint. We will acquire the CD of interview(s) and watch it to decide whether it has violated various provisions of section 126 of the Representation of the People Act. After that we will convey our opinion to the Election Commission," he said.

Section 126 is about 'prohibition of public meetings during period of 48 prior to end of polling’.