Few hours into Phase 1 voting for Gujarat elections and already allegations of EVM rigging have surfaced. The Congress alleges that some EVMs in Porbandar, Surat and Jetpur are linked to Bluetooth, while the EC says it has replaced some EVMs.

Sixty eight per cent polling was recorded in the first phase of Gujarat polls, senior deputy election commissioner Unmesh Sinha said on Saturday. Eighty nine seats out of the total of 182 Assembly constituencies went to polls in the first phase with prominent candidates like Chief Minister Vijay Rupani (Rajkot West), Congress' Shaktisinh Gohil (Mandvi) and Paresh Dhanani (Amreli) in the fray. Allegations of EVM tampering also surfaced at Porbandar, Surat, Jetpur and Navsari and the Election Commission has ordered a probe. Meanwhile, the action shifted to campaigning for Phase two. PM Narendra Modi attacked the Congress for a tweet by one Salman Nizami, who he claimed was an aide of Rahul Gandhi. The Congress, meanwhile, denied knowing him.

Finance Minister Arun Jaitley has termed the Congress party's Gujarat poll manifesto as 'constitutionally and financially impossible' and said the promises like quota to Patidar and farm loan waiver can never be fulfilled. On the day Gujarat went in for the first phase of polling, Jaitley said, "Having no model of development, the Congress party's manifesto is one of fiscal impossibility. The total revenue earned by the state is about Rs 90,000 crore per annum. The Congress promises a tax waiver of Rs 20,000 crore."

Zero voting was recorded at Gajadi village in Morbi district of Gujarat on Saturday as the locals, fed up with water shortage, boycotted polling. While long lines were seen outside polling booths in Saurashtra and South Gujarat in the first phase of Assembly polls, none among the 1,000 registered voters in Gajadi turned up to cast vote, officials said. The ruling BJP said the complaint shows the opposition party's

Election commission says 68% voter turnout has been recorded in the first phase of Gujarat election till now, but the final figures may go a little higher and touch last assembly election’s tally. A total turnout of 71.32 per cent was recorded in the last election to the 182-member Assembly.

#Visuals from Rajkot: EVMs & VVPATs being sealed after first phase of polling ends in #GujaratElection2017 pic.twitter.com/3MBIGuVL42

Average voting in the 19 districts till 5pm

Over 70 percent voting was registered in Gujarat at close of polling at 5pm in the first phase, though there were still long queues lined up to vote at most polling stations, Chief Electoral Officer BB Swain said on Saturday.

First phase of polling has ended, we are extremely grateful to EC, the officials & voters for peaceful & successful completion of voting. I'm sure, as per the reports that are coming, that BJP is going to register a landslide victory: Arun Jaitley

Salman Nizami asks on Twitter- Modi who is your father, who is your mother. Among the other things he says- he calls for Azad Kashmir. He calls our army rapists. How can the people accept such people like Salman Nizami. He also says there will be an Afzal from every home: PM

Modi government takes from the poor, gives to a handful of the rich: Rahul in Vadnagar. 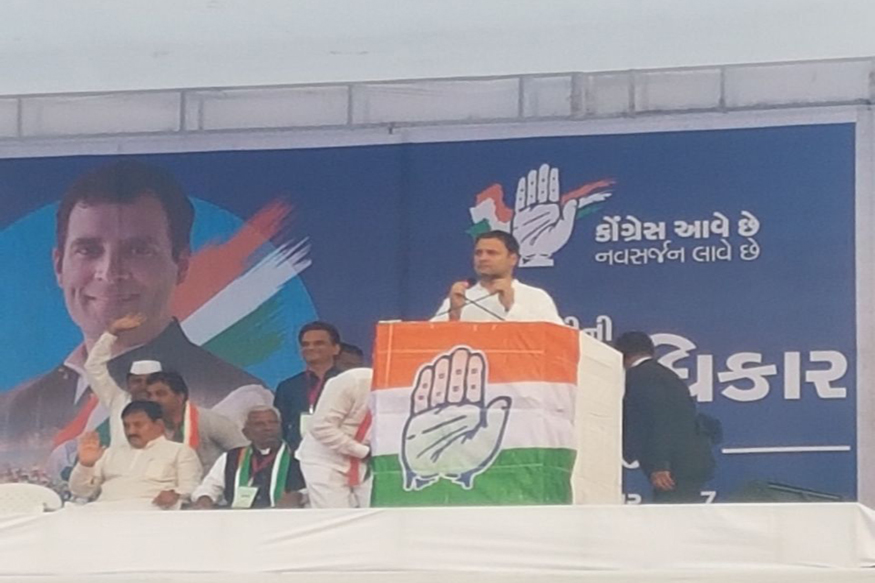 Rahul Gandhi attacks the BJP for not releasing a manifesto for Gujarat. “We have been working on our manifesto for the last three months. We went to all sections of society and asked people what they want their government to do. We don’t talk about ourselves. We talk about what they did in the last 22 years and what Congress will do in next five years,” Rahul says in Vadnagar. Taking the fight directly to Modi, he says the Prime Minister has stopped talking about development and corruption. “He tries to distract the people. But whenever he tries doing that, we bring him back to the issues,” Rahul adds.

Addressing a rally in Mehsana's Vadnagar, Rahul Gandhi says that 90 per cent of Narendra Modi’s speeches have been about Modi himself. “90% samay unhone apne aap pe bhashan dia, Narendra Modi ne Narendra Modi ke baare mein bhashan dia, aur kuch bacha hi nahi! But this election is not about Modi Ji or me, it is about Gujarat's future,” he says. Voter turnout till 4 pm has been recorded at 60.1 per cent.

Congress communication in charge Randeep Surjewala says the high voting percentage recorded in the first phase of Gujarat election reflects that the state is ready for a change. “We are confident we will form the government,” he says.

Congress vice-president Rahul Gandhi posed his 11th question for Prime Minister Narendra Modi on Saturday, asking why Modi had sold out education in the state and “turned schools into shops”.

Details of voter turnout in various districts till 2pm.

Bhavnagar’s deputy electoral officer Yogesh Thakur says no issues of EVM malfunctioning reported in the first phase of the Gujarat election till now. “Some EVMs replaced due to errors. EVMs were updated with VVPAT, which allows people to verify their vote for 7 seconds,” he says.

#WATCH EVM engineer S.Anand talks to media after visiting a polling booth in Porbandar's Thakkar plot following complaints of EVM being connected to Bluetooth, says, 'the name that you give to your Bluetooth device will be shown when it is paired to another device' #Gujarat pic.twitter.com/TivLjQXEOW

A team of Election Commission reaches polling booth in Thakkar Plot, Porbandar after complaints of EVM being connected to Bluetooth #GujaratElection2017 pic.twitter.com/ETmuu73Fwk 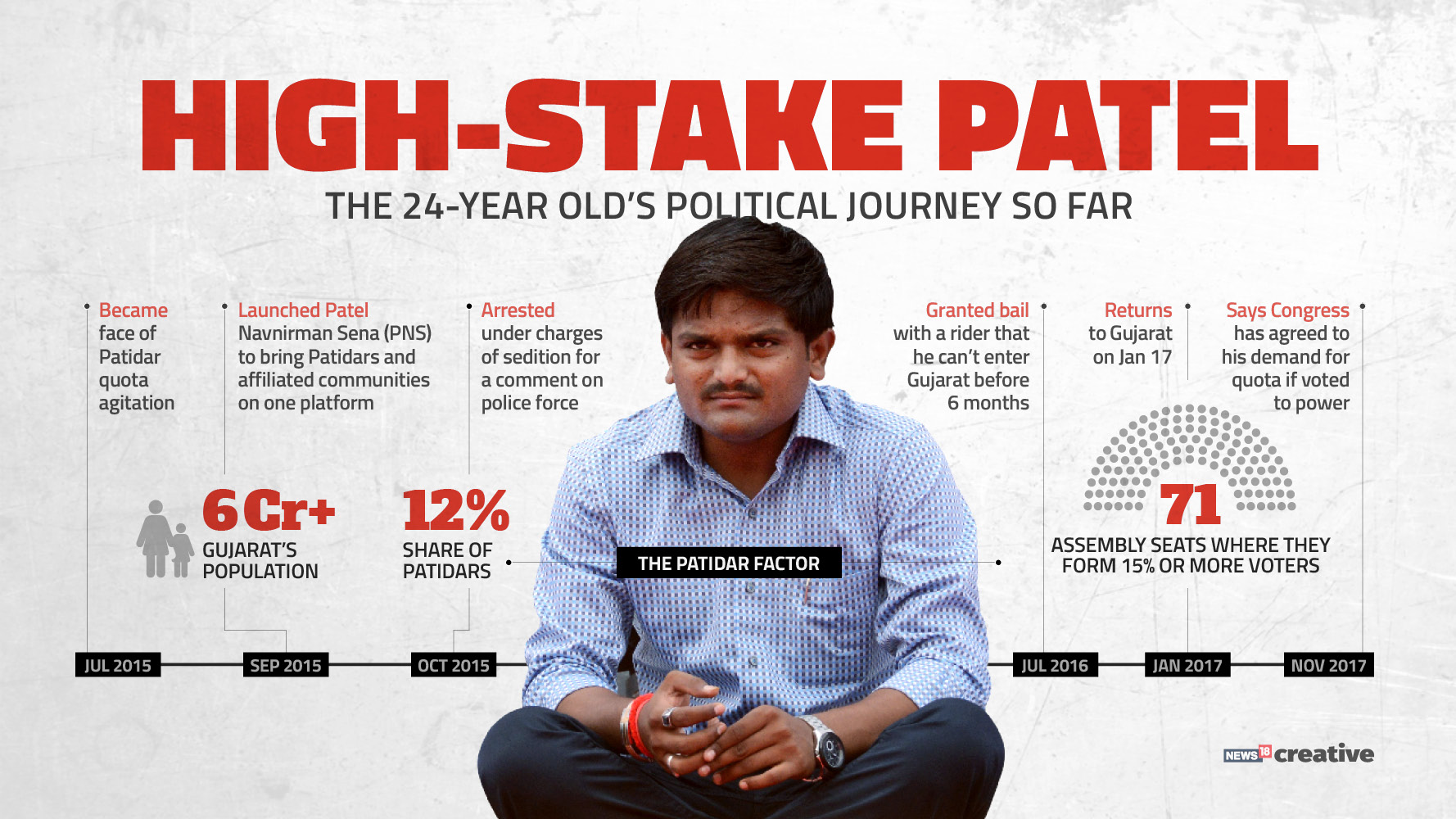 People from Gajdi village of Morvi District have boycotted the elections, protesting against lack of basic amenities.

Another Congress leader has alleged EVM being connected to Bluetooth in Jalapore constituency of Navsari district.

"PM Narendra Modi has not spoken about corruption during his rally in Gujarat. He has turned the talk of the town into what people said about him. This election is about the people of Gujarat and their future. The BJP has looted land from the people and handed it over to industrialists. The Tatas and Adanis have gained from your land. People were promised jobs in the Nano factory but not one person has gotten a job in that factory. The Nano has been a failure. Meanwhile, land was gifted to Adani on a platter," says Rahul Gandhi during his rally in Patan's Harij.

"The Congress party has made it a practice to say that EVMs are malfunctioning every time they face defeat. Therefore, they are preparing ground before December 18 to blame their defeat on EVM," says PMO MoS Jitendra Singh.

"There are no issues with the EVMs, a few places where the machines had problems, have been resolved. The machines were replaced wherever required. Polling is going on peacefully," says Bhavnagar District Collector, Harshad Patel.

People line up to vote outside a polling centre in Gujarat. (Photo: Kamal Dev/Network 18)