Nauksham Chaudhary says there's is a lot of interest in her poll battle as she's a Hindu and her political success will be decided by Muslim voters who constitute for 85 per cent of the total population in the area.

Eram Agha
Puhana (Mewat): Twenty-seven year old Nauksham Chaudhary, who has been fielded by the BJP to lead the fight in Mewat’s Punhana ahead of Haryana assembly elections, is an exceptional candidate for several reasons.

Daughter of a judge and a bureaucrat, Chaudhary is a Miranda House alumnus who subsequently studied in luxury brand management in Italy and then got a degree in communications from UK.

She wanted to work in the corporate world in New York, Europe, but during one visit to India and with the help of sarpanchs in her area, she stepped into the political arena and will now fight a major battle when Haryana goes to polls on October 21.

Chaudhary is as upbeat about her political debut as she is about Narendra Modi’s mention of her during a recent rally, when he said he’s keeping a close watch on her constituency. The story is being told and retold by her supporters in Punhana to make sure no one misses the prime minister’s endorsement of her. 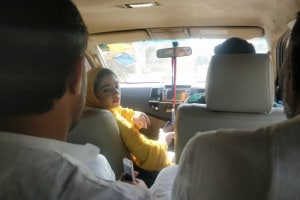 On her way to a village to address a Jan Sabha, she told News 18, she is fully prepared for the new challenge. “I would define myself as the new face of a very backward area. I have the strength to face the challenges in the Muslim-dominated area. Here, 85 per cent voters are Muslim and I am a Hindu, and this is going to be historic win as Hindu and Muslim have come together,” she said as local men and women thronged to get a glimpse of the young, independent woman surrounded by village sarpanch and security guards.

Politics, Chaudhary said, happened to her by chance, and she now sees a good omen in her political foray as “both Hindus and Muslims have come together” to vote for her.

As she climbs the stage to address the people she speaks in the language that can connect with the people. Echos of “Main aur Bahubali” and "Mewat ki Shaan" fill the air as she makes a point about her education being enough to take on the Bahubalis and give Mewat a reason to be proud.

Her public address is full of rich Urdu. "Main sardari aur malqiyat ka shukriya ada karna chahti hoon. " (I would like to thank the village leadership). And on seeing the crowd cheer and swell in number, she said, "Taadat bata nahi hai inshallah hum Jeet jayenge." (The numbers suggest we will win).

While the voters know her father who is a jurist and lives in the area, his foreign educated girl is new to them. That is why her emphasis is on building a connect through local language. She may have been away from home for long, but her command on the local dialect is strong.

“They have not seen me before, but they know my father. I know how to connect with them…I do that in the native language which they understand. When you talk to them in their own language, it establishes an emotional bond,” she says.

The 27-year-old is pitted against Congress’s Mohammad Iliyas, who won the seat in 2009. Although the saffron party hasn’t performed well in the seat in the past, its young candidate appears to have struck a chord with the locals.

Aslam is not the only one who sees potential in her. Many others, too, are supportive of the BJP candidate.

“You see the list…unlike the male contenders we have seen in the past, she is educated, secular. Earlier, we had dacoits standing for elections from Punhana. We will change this,” said Nasruddin Khan, who runs a shop in the village. “At least 20-30 sarpanch are backing her. There is a larger wisdom in getting an educated person here,” he said, adding that people will give her a chance because of her education and because they trust the candidate that BJP has put forth.

Auragnzeb, another labourer, said, “We didn’t see her before, but that’s because she was being educated. We hope she keeps her promises if she wins. We have schools but no teachers in Punhana. There is water scarcity and the nullahs are running dry.”

A Vote for Education

Chaudhary has been living alone for last 11 years. Having taken all her decisions on her own since long, she plans to use the same acumen to run her constituency.

The only time she remembers she was heart-broken was when she could not qualify for the UPSC. “I have 20 IAS officers sitting at home. My parents are bureaucrats so when I could not qualify, I faced a major setback. But I didn’t have my heart in the UPSC. I realised I can do better in other ventures and now here I am.”

“Punhana has issues that need urgent attention. There is a lack of proper education, no awareness on women’s health and upiftment and there are no good colleges either. People here want a university and we need to work on that. As an educated candidate, I know how to make work models for bringing in employment, labour development programs and skill industries,” Chaudhary said.

During her visits to the constituency, she interacts with the youth to know what people want and aims to raise the education standards of the area. “As an educated candidate I can make a difference here, there is extreme backwardness and the BJP is the only party that realises how underdeveloped areas can be pushed forward.”

The women in her constituency surround her as soon as she enters the field. Some young girls just giggle at the mention of her name. The response is massive from women. “Women show a lot of love to me. And why not, after a long time a female candidate is challenging the male candidates across. I am standing against the former minister and others,” she said.

The focus of her developmental work, she insists, will be on women’s empowerment. “We need to have educated women. Once they are educated they will understand the meaning of self-dependence, get themselves enrolled in colleges, skill development and artisan programs. Women do not know about these programs,” she said.