Here are the seats where the BJP was able to steal a march though the SP and Congress together totalled more.

Partners Samajwadi Party and Congress were engaged in friendly fights in at least a dozen seats and in at least five of them that cost the alliance dearly.

Here are the seats where the Bharatiya Janata Party was able to steal a march though the Samajwadi Party and Congress together totalled more. 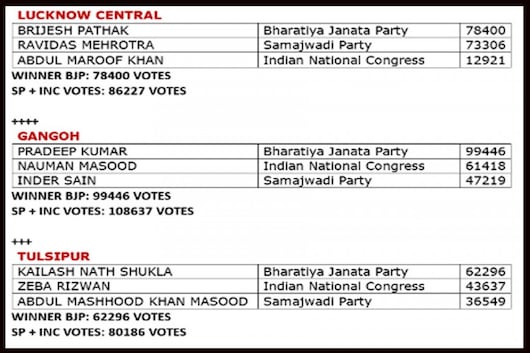 ALSO READ: Congress Kept Priyanka Out of UP, the Alliance Paid for it Dearly

BJP on Saturday swept Uttar Pradesh Assembly elections defying all predictions of a tight three-cornered with SP-Congress alliance and BSP.