In Clean Chits to PM Modi on Poll Code Violations, Not All Election Commissioners Were on Same Page

The Election Commission sent two letters to the Congress saying that its complaints have been disposed of but did not spell out whether the decision was taken unanimously or by majority.

New Delhi: The Election Commission’s decision to give two clean chits to Prime Minister Narendra Modi over complaints of violation of the model code of conduct with his speeches in Wardha and Latur has been communicated to the Congress in two letters.

But what was not mentioned in the letters, sent on April 30 and May 1, was how the decision was arrived at even as sources told News18 that it was not unanimous in either case.

In his speech in Wardha, Modi’s “minority is majority” remark was questioned as he slammed Rahul Gandhi’s decision to contest from Wayanad in Kerala, while in Latur, Modi had asked first-time voters to dedicate their votes to the soldiers who conducted the Balakot air strikes in February.

According to sources, in both complaints, one Election Commissioner had found that the Prime Minister had violated the model code of conduct but was over-ruled by the other two.

It was the same Election Commissioner that had dissented in both the cases, a source told News18, and added that it is a rare occurrence that a decision was taken by majority and not unanimously.

Also unusual was that the poll panel’s communication to the Congress spokesperson skipped this detail, and only mentioned that the complaints have been disposed. 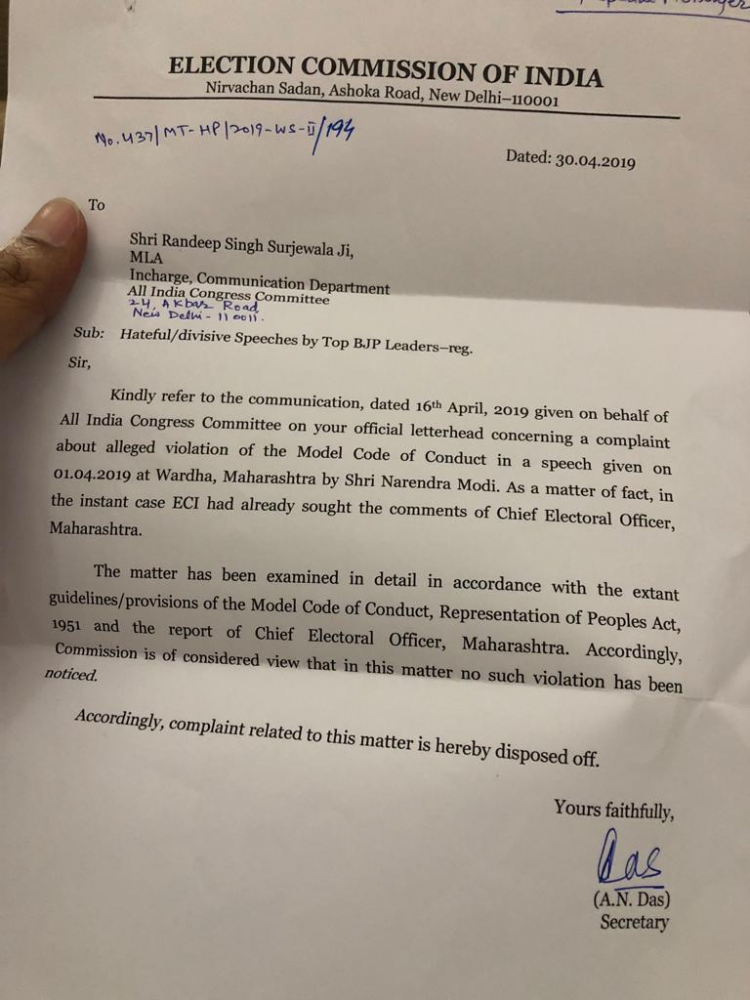 A report in the Indian Express stated that a third Congress complaint into alleged violation of the poll code by Modi was resolved unanimously. In this case, the Prime Minister had warned Pakistan about India’s nuclear arsenal at an election rally in Rajasthan’s Barmer and said that it was not kept for Diwali.

The poll panel had given the first clean chit to Modi on Tuesday when it found no violation of the MCC and electoral laws in Modi’s April 1 speech at Wardha, Maharashtra. The PM, while referring to Congress chief Rahul Gandhi’s decision to contest from Wayanad, had said the party was “running away from majority-dominated areas” to “take refuge in areas where the majority is in minority”.

In the second clean chit, given on Wednesday, the EC said it did not find Modi’s invocation of armed forces for his appeal to first-time voters violative of the poll code despite Chief Electoral Officer of Maharashtra also recommending action.