In First List for Maharashtra Polls, BJP Names Fadnavis as its Candidate from Nagpur South West, Chandrakant Patil Gets Kothrud

Maharashtra Chief Minister Devendra Fadnavis along with his family members show their finger marked with indelible ink, after casting their vote during the first phase of general elections, in Nagpur. (Image: PTI)

While Fadnavis will fight polls from Nagpur South West seat, Patil is set to contest from Kothrud. Among others, Manohar Bhadane has been named from Dhule rural and BJP minister Pankaja Munde from Parli.

New Delhi: Maharashtra Chief Minister Devendra Fadnavis, BJP chief Chandrakant Dada Patil and minister Pankaja Munde were among 125 candidates named by BJP on Tuesday in its first list for Maharashtra assembly elections to be held across on October 21. The party also announced the name of Shivaji Maharaj's descendant, Udayanraje Bhosale as its candidate for Satara bypolls.

While Fadnavis will fight polls from Nagpur South West seat, Patil is set to contest from Kothrud after BJP dropped sitting MLA Medha Kulkarni's name this time. Among others, Manohar Bhadane has been named from Dhule rural and BJP minister Pankaja Munde from Parli. On the other hand, Bhosale, who had crossed over from NCP to BJP recently, will be party's face in Satara.

Addressing a press conference, party's general secretary Arun Singh said the party had not given tickets to 12 of its MLAs. "The BJP will contest the Maharashtra Assembly election in an alliance with the Shiv Sena and some smaller parties," he said.

Maharashtra will go to polls on October 21 and the results will be declared on October 24.

The announcement comes a day after allies Bharatiya Janata Party and Shiv Sena issued a Press release signed by state BJP chief Chandrakant Patil and senior Shiv Sena leader Subhash Desai that confirmed both parties would contest next month's Maharashtra state elections as an alliance but did not disclose the seat-sharing formula.

Both Shiv Sena and BJP have recently inducted more than 20 legislators and leaders from the Congress and the Nationalist Congress Party, who could to be accommodated during the ticket distribution process.

Here's the complete first list of candidates BJP has released for Maharashtra: 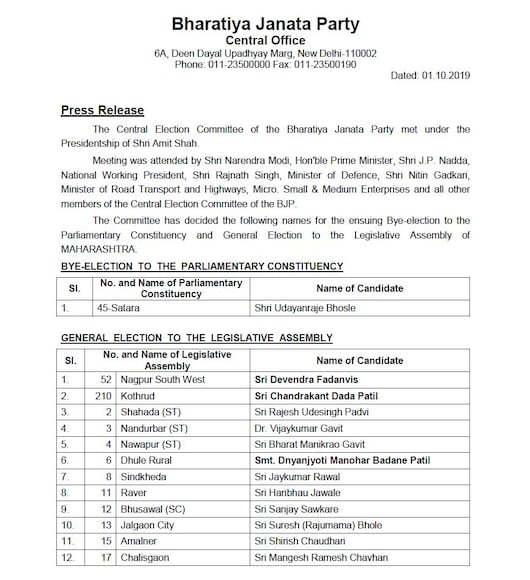 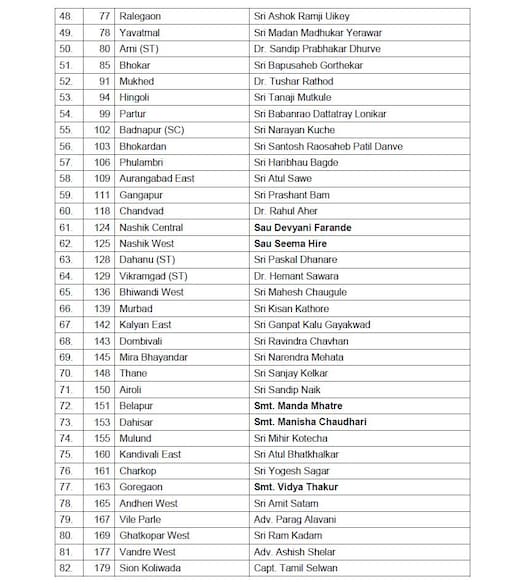