In First Rally of the Season, PM Modi Hits Out at Oppn for ‘Making Bihar Bimaru’, Wanting Article 370 Back in J&K

PM Modi began his speech by lauding the bravery of Biharis in Bhojpuri and paid respects to two senior political figures, LJP founder and NDA ally Ram Vilas Paswan, and RJD’s Raghuvansh Prasad Singh, whose son recently switched over to the JD(U).

Prime Minister Narendra Modi on Friday addressed his first election rally for the current election season in Bihar, commencing his speech with the words "Fir ek baar NDA sarkaar." Speaking at a rally in Bihar’s Sasaram, Modi took on the Opposition, saying that those who had pushed Bihar into the Stone Age, and those who were talking about reversing the decision to abrogate Article 370 — referring to the Congress party — had no business asking for votes from the people of Bihar.

“There are those who are talking about reversing the decision to abrogate Article 370. I am amazed that even after making such statements, they have the courage to come and ask for votes from the people of Bihar,” Modi said referring to a recent statement made by former finance minister and senior Congress leader P Chidambaram who, through a Twitter post, had criticised government’s decision to revoke Jammu and Kashmir’s special status.

Modi began his speech by lauding the bravery of Biharis in Bhojpuri and paid his respects to two senior political figures, LJP founder and NDA ally Ram Vilas Paswan, and RJD’s Raghuvansh Prasad Singh, whose son recently switched over to JD(U). He also paid rich tributes to Indian army soldiers from Bihar who laid down their lives fighting the Chinese Army in Galwan Valley. 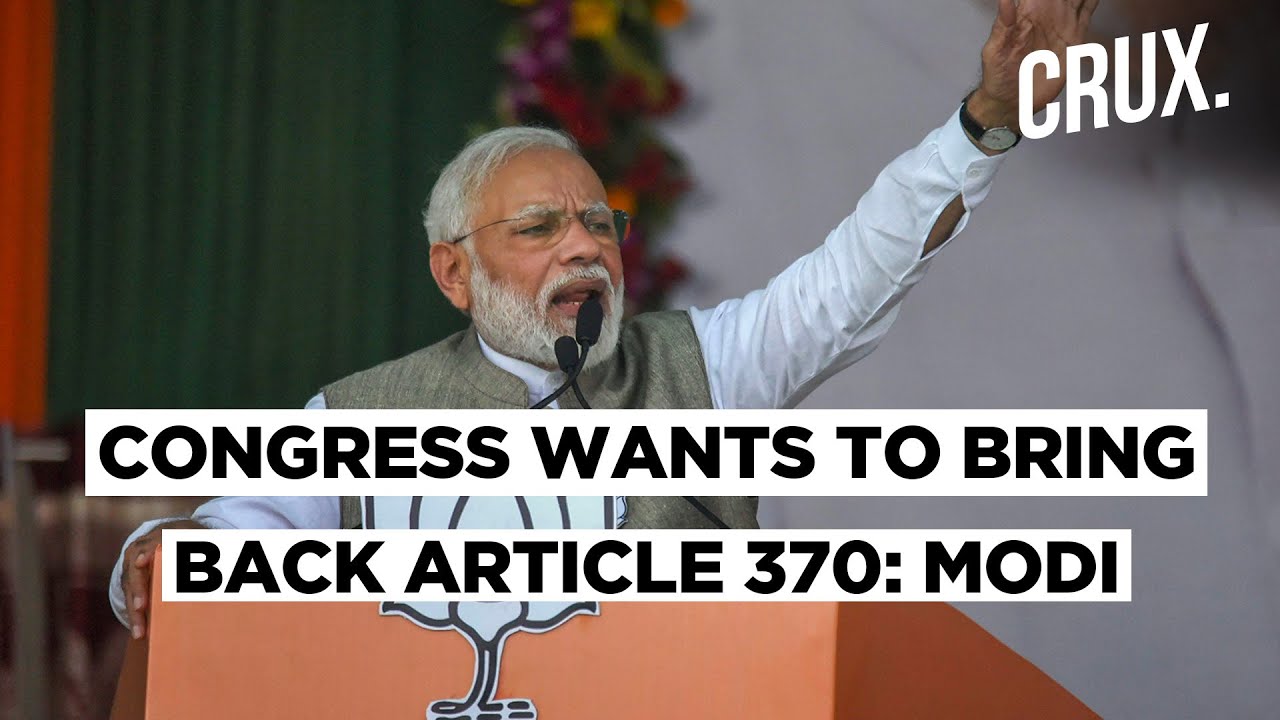 Taking another dig at the opposition alliance in Bihar, Modi invoked the alleged poor law and order in the state under RJD rule, and said people have made up their minds that those who have a history of making Bihar 'Bimaru' will not be allowed to return. Notably, 'BIMARU' is an acronym for Bihar, Madhya Pradesh, Rajasthan and Uttar Pradesh. It was used to refer to the 'poor economic conditions' of these states.

He also took on the Congress for raising several objections to the government’s decision to purchase Rafale jets and backing farmers’ protests against three farm bills. “Mandi, MSP to bahana hai, dalaalon aur bichauliyon ko bachana hai (Markets and MSP are only a ruse to save the middlemen),” Modi said.

The Prime Minister also tried to put to rest, the rumours about BJP’s covert ties with the LJP, whose chief Chirag Paswan, has launched an all-out attack against Nitish Kumar and JD(U). “It happens in every election that before the polls one or two big faces suddenly crop up and are shown to be bigger than they actually are. But these things never affect polling. Bihar’s electorate is intelligent enough to not fall for such rumours and myths,” Modi said.

PM Modi also addressed the problem of anti-incumbency, which many political observers say is weighing heavily on NDA’s fortunes. “For 10 years, UPA government after being rejected by Bihar was so angry with its people that they never let Nitish Kumar do his work. I remember the meetings which I used to attend as the Chief Minister of Gujarat along with Nitish Kumar who represented Bihar. He kept asking those people sitting in Delhi to remove the roadblocks from works of Bihar. But they never listened to him,” Modi said.

He added that it was only after he was voted to power at the Centre that he got an opportunity to work with the Bihar chief minister. “In the three to four years that I have worked with Nitish Kumar, you would have seen how projects have moved with three to four times their usual speed... How development works have been speeded up by five times at places,” Modi said.

Congratulating the people of Bihar for effectively handling the coronavirus

pandemic, Modi said that it was under the leadership of Nitish Kumar that a disaster of unimaginable proportions was averted in the state. “Even the most developed countries have succumbed to the virus but due to the speed with which arrangements were made in Bihar, a lot of lives were saved. The results are for everyone to see,” Modi said.

He also reminded people about the 15-year rule of the RJD, which preceded Nitish Kumar’s one-and-a-half-decade reign, in which, Modi said, “Sunset meant everything coming to a standstill. There was no rule of law. Extortion, murders, kidnappings were the order of the day. Today’s new generation in Bihar should remember those dark times before casting their ballot,” Modi added.