Charismatic, dynamic and decisive -- that would be how some would describe Jayalalithaa, Chief Minister of Tamil Nadu and all-powerful chief of the All India Anna Dravida Munnetra Kazhagam (AIADMK). Dictatorial, mercurial and whimsical are adjectives used by her critics. What is undeniable though is that Jayalalithaa is now a juggernaut in the southern state and is on the move, trampling all else in her path.

Her first stint as Chief Minister was in 1991, following the death of her mentor and party founder MG Ramachandran. Jaya, until then a Rajya Sabha MP and party propaganda secretary, played her political cards beautifully, throwing her only competitor, MGR’s wife Janaki Ramachandran out of the reckoning, uniting the party behind her and winning the state elections on the strength of her campaign.

Jaya has been Chief Minister five times -- two times out of these were when she was jailed on corruption cases and later reinstated to power. ‘Amma’ (mother) to her party cadre, Jaya has been careful not to put her foot on slippery slopes in the past five years, after being elected with a large majority in 2011.

Jaya’s albatross since 1996 has been a case of disproportionate assets filed against her by the Directorate of Vigilance and Anti Corruption during rival Karunanidhi’s regime. This Rs 66 crore case, now being called the DA case (Disproportionate Assets), is awaiting judgement on appeal in the Supreme Court after a conviction in the trial court in 2014 and an acquittal in the Bangalore High Court in 2015.

She got a taste of jail in December 1996, when she was arrested for a few days in the colour TV case, another case of alleged corruption where prices of TV sets were inflated and procured by government. The allegation against Jaya and her close aide Sasikala was that they siphoned off Rs 8.53 crores.

The TANSI case too was a close one for Jaya. Accused of buying government land at a throwaway price through a company in which she was a silent partner, Jaya was convicted by the lower court but later acquitted on a technicality by the Supreme Court. 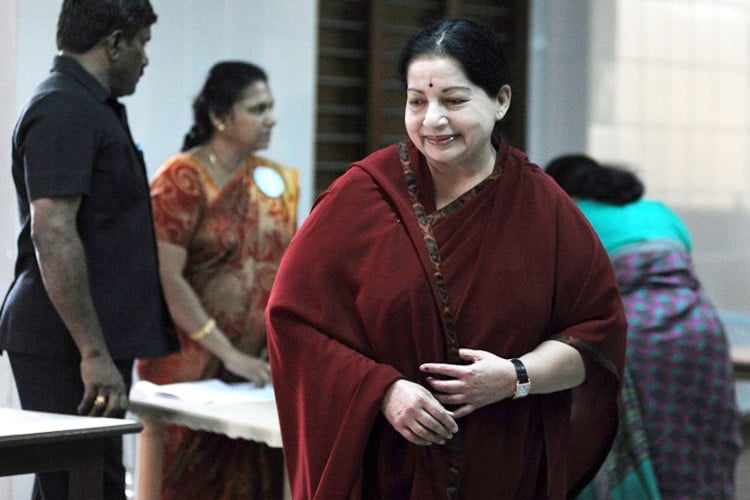 The main challenges for Jayalalithaa would be to overcome the anti-incumbency on the ground. “There is dissatisfaction on the ground, but no anger,” observe leaders of the rival Dravida Munnetra Kazhagam (DMK). Jaya is banking on welfare schemes and freebies offered by her from 2011 onwards – free mixers, grinders, fans, free gold for ‘thaali’ (mangalsutra) for young women – to impress the voter into bringing her back.

The DA case too could prove a thorn in her side. Corruption charges against her ministers are numerous and she has not taken action against most of them in the past five years. In fact, these same ‘tainted’ ministers and MLAs have been given seats, as Jaya is taking no chances in 2016. Her ‘Amma’ brand of schemes -- Amma canteens, Amma mineral water, Amma salt, Amma cement -- have been popular and she is highlighting them on her campaign tour of the state.

It has been a long journey for Jaya – from becoming a cine star at 15 years of age to the war for a second consecutive term as Chief Minister of Tamil Nadu. Will she win this one too? In a little over two weeks the people shall answer.