Karnataka Bypoll Results 2019 LIVE Updates: BS Yediyurappa is set to retain power, with the BJP winning 12 of the 15 seats that went to bypolls last week. The saffron party needed minimum six to stay afloat in the southern state. The Congress won two seats, while an Independent won one. The JD(S) suffered the biggest setback with zero wins. Accepting responsibility for the drubbing, Congress leader Siddaramaiah resigned as the leader of opposition in assembly, while Dinesh Gundurao quit as KPCC president. Neither resignations have been accepted yet.

The Karnataka bypoll were held to fill the vacancies caused by the disqualification of 17 rebel Congress and JD(S) MLAs, whose revolt led to collapse of the HD Kumaraswamy-led coalition government in July and paved the way for BJP to come to power. The elections had taken place at Yellapur, Ranebennur, Vijayanagar, Yashwanthapur, Mahalakshmi Layout, Chikkaballapura, KR Puram, Shivajinagar, KR Pet, Hunsur, Athani, Kagwad, Gokak, Hirekerur and Hoskote. Twelve of these 15 seats were held by the Congress and three by JD(S).

"I owe a moral responsibility for the outcome of this election. I hereby offer myself to step aside from the post of President, Karnataka Pradesh Congress Committee," reads Dinesh Gundu Rao's resignation letter. Addressing a press conference Dinesh Gundu Rao says that he will be meeting Sonia Gandhi to relay his observations about the recent bypolls in Karnataka. "We fought a good election but ultimately have to bow our head to democracy." 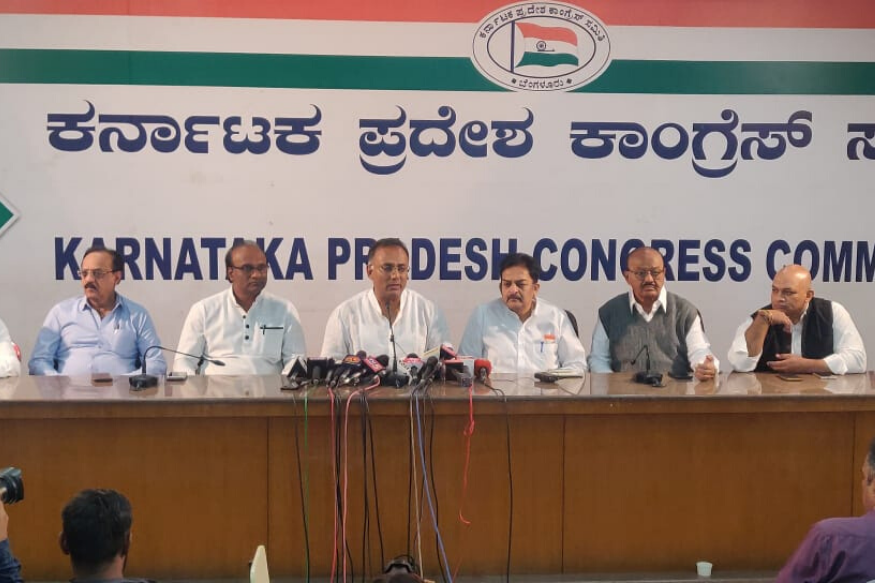 Dinesh Gundu Rao Resigns as KPCC Prez | Tendering his resignation as the  Karnataka Pradesh Congress Committee (KPCC) President, Dinesh Gundu Rao says, " We were expecting people will punish those who have gone against the Constitution. This kind of mandate should be discouraged as it's giving wrong precedence."

Launching an attack on the Congress, former Maharashtra CM Devendra Fadnavis has tweeted saying, "In the very first chance they get, this is how voters react to opportunist politics & stealing of mandate by rejected parties by coming together for the sake of power! #KarnatakaBypolls result proves that people won’t tolerate if someone tries to play with public mandate & wish!"

In the very first chance they get, this is how voters react to opportunist politics & stealing of mandate by rejected parties by coming together for the sake of power!#KarnatakaBypolls result proves that people won’t tolerate if someone tries to play with public mandate & wish!

'My Moral Responsibility to Step Down': Siddaramaiah's Resignation Letter | "I express my sincere regret for not being able to give satisfactory results in the recently concluded bye-elections held to Karnataka Legislative Assembly despite my sincere efforts," Siddaramaiah wrote in his resignation letter and further said that it was his moral responsibility to step down as the CLP leader.

Siddaramaiah Resigns as Opposition Leader | Following the rout of Congress in the Karnataka Assembly bypolls, Siddaramaiah resigns as opposition leader. Meanwhile, Dinesh Gundu Rao, too, resigns as the president of the Karnataka Pradesh Congress Committee. However, the party has not accepted their resignations yet. Both the senior leaders will address a press conference soon.

BJP MLA and election in-charge Arvind Limbavalli at the party headquarter in Bengaluru:

People of Karnataka Taught Congress a Lesson, Says PM Modi in Jharkhand Rally | Meanwhile, at an election rally in Hazaribagh, Jharkhand, Prime Minister Narendra Modi referring to the Congress-JD(S) rout in the Karnataka Assembly by-election, says, "Today,  after the results of Karnataka bypolls, those who cheated the mandate of the people, have got their answers from voters in a democratic manner. Whether the BJP will be in power in Karnataka or not was to be decided today. People have punished the Congress there. This is a message for all the states in India that whoever will go against the  mandate will insult the people and the voters will eventually teach them a lesson."

BJP Wins 12 Seats | The BJP wins all 12 constituencies in which they were leading, while the Congress bags just two seats and an independent candidate wins one seat.

How Friction Within BJP Has Kept Maski, RR Nagar Seats Out of Bypoll Race | The bypolls were held in only 15 of these seats last Wednesday. The remaining two seats that are yet to see elections are Maski (in Raichur district) and Rajarajeshwarinagar (in Bengaluru). Both have cases pending in the Karnataka High Court for completely a different reason — electoral malpractice. And, the constituencies would continue to remain unrepresented in the Assembly for some more time, considering that the cases haven’t moved ahead much in the court. The cases are pending against the disqualified MLAs of these two constituencies — Pratapgouda Patil and Muniratna. They were filed by the BJP candidates who faced defeat in these two seats in the Assembly election of May 2018. Read the full story here.

Jubilant BJP workers break out in a celebration as the party looks to sweep the Karnataka Assembly bypolls. Karnataka Chief Minister BS Yediyurappa celebrates the seeming victory of the BJP with his son Vijayendra. Shivakumar Concedes Congress' Defeat | Conceding defeat, Congress DK Shivakumar says, “We have to agree the mandate of the people. We have accepted defeat but there is no need to be dis-heartened. By-elections and general elections both are different. The Congress has a stronghold in Karnataka and it will not vanish."

BJP Leads in 12 Seats, Congress in 2, While JD(S) Pushed to Zero | The BJP has taken up a lead in 12 seats, pushing the JD(S) to zero. The Congress continues to lead in two seats, Shivaji Nagar and Hunsur. The JD(S) is trailing in Yeshwanthpura and Krishnarajpet seats, where it was leading in early trends. Independent candidate and BJP rebel Sharath Kumar Bachi Gowda leads in Hosakote.

BJP Wins Yellapur | The Bharatiya Janata Party has secured a win in Yellapur after the Election Commission declared the bypoll election result for this constituency.

The Bharatiya Janata Party (BJP) requires a minimum of 6 seats in the 224-member Karnataka Assembly for a simple majority with 112 as the halfway mark, as it already has 104 members, excluding the Speaker and the support of an Independent. Read the full story here.

Meanwhile, the celebrations have already begun in the BJP quarters as the party is leading in majority of seats and looks to get the magic number to stay in power in Karnataka.

In Vijayanagara, the Congress is leading by a whisker by just 75 votes after the fourth round of EVM counting.

Third round of EVM counting is underway and the trends continue: BJP leads in 10 seats, JD(S) leads in 2, Congress in 2 and Independent candidate in 1.

Two rounds of EVM counting is almost completed in all the 15 constituencies. In Krishnarajpet, where the BJP is trailing, the JD(S) leads by over 1,000 votes. Meanwhile, in Hoskote, Sharath Kumar Bache Gowda is leading by 1,700 votes.

While the overall polling percentage was 67.91, the highest voter turnout was recorded in Hoskote assembly segment (90.9 per cent), whereas the lowest was KR Puram (46.74 per cent).

While by-elections took place in 15 segments, the bypoll in the two other constituencies -- Rajarajeshwari Nagar and Maski -- will be held later as the matter is sub-judice.

As many as 165 candidates contested the election, though it was, by and large, a triangular fight between the Congress, BJP and the JD(S). The BJP had fielded 13 of the 16 disqualified legislators, who joined the party after the Supreme Court allowed them to contest the bypolls as its candidates from the constituencies they had won in the 2018 assembly elections on Congress and JD(S) tickets.

The BJP and Congress were pitted in direct contest in most of the constituencies that went for the bypolls. In the southern parts of the state, JD(S) was also in the fray, making it a triangular fight. The BJP needed at least six seats in an assembly of 221 seats minus the speaker to continue in the government.

He will have to strike a balance by accommodating the victorious disqualified legislators in his ministry as promised by him and also make place for old-guards, who have been upset over being "neglected" in the first round.

Including the Chief Minister, currently there are 18 ministers in the cabinet, whose sanctioned strength is 34.