New Delhi: Lok Sabha Election Results 2019 LIVE Updates: A day after opposition parties knocked on the doors of the Election Commission saying they don’t trust EVMs and demanded verification of VVPAT slips before counting, the poll panel will hold an internal meeting today.

The development comes a day after the EC dismissed allegations that the voting machines used in the Lok Sabha election were being switched with fresh ones ahead of counting of votes on May 23, the Election Commission Tuesday set up a 24-hour control room here to monitor complaints relating to EVMs.

Congress candidate for Odisha's Aska Assembly seat, Manoj Jena and his associate have been shot at by bike-borne miscreants near Lanjipalli in Berhampur. Jena, who received several bullets on his chest and neck, has been taken to MKCG Hospital in a critical condition.

Congress Complains to Lokpal on its MLAs Deciding to Switch Over to TRS in Telangana | Congress in Telangana has lodged a complaint with anti-corruption ombudsman Lok Pal, alleging that the ruling TRS indulged in "political corruption" by providing government benefits to opposition MLAs who are ready to switch over to the party. The party's state General Secretary Manavatha Roy said he has submitted the complaint in Lokpal office in Delhi.

The Aam Aadmi Party Wednesday accused the Election Commission of working with the BJP to "tamper" EVMs to get the results of the Lok Sabha polls in its favour. Leaders of 22 opposition parties had met the Election Commission on Tuesday and demanded verification of VVPAT slips of randomly-selected polling stations before the counting of votes begins Thursday. The EC on Wednesday rejected the demand.

TMC district president Rabindranath Ghosh got involved in a row with the Coochbihar SP Amit Kumar Singh. The police refused to grant permission for setting up a TMC camp near the Coochbehar Polytechnic College where counting will take place on Thursday. Ghosh said that they are going to set the TMC camp on the regular area just like they have doing just like other elections. Singh was appointed as the SP in the district just 2 days prior to the elections and it is alleged by TMC that it has been done on BJP’s instructions. Coochbehar seat is likely go to BJP as exit polls predicted.

EC Decision on VVPAT Slips ‘Dark Day for Indian Democracy’: TDP | The Telugu Desam Party Wednesday termed as "a dark day for Indian democracy", the Election Commission of India turning down a demand to count VVPAT slips ahead of the EVMs during the counting process on Thursday. Reacting to the ECIs decision, TDP general secretary Nara Lokesh said in a tweet, "A genuine and fair demand for transparency is chucked out the window without a reason. A dark day for Indian democracy!" The most influential Muslim religious body in Bihar, Imarat Shariah, expressed its dissatisfaction over political parties not providing enough representation to Muslims in proportion to their population while distributing tickets for the Lok Sabha polls.

Congress candidate from Bangalore Central says Roshan Baig has worked against him in LS election campaign, urges appropriate action against him. Baig Speaking Out of ‘Thirst for Power,’ Says Siddaramaiah | Rebuking senior MLA Roshan Baig​ for his outburst against the party leadership, including him, Congress Legislature Party leader and former Chief Minister Siddaramaiah Wednesday said his act was out of "thirst for power". "Roshan Baig I don't know...maybe because he did not become Minister and as he was not given ticket for MP (Lok Saba election- he has spoken like that)," Siddaramaiah said.

A formal complaint with cyber cell of Delhi Police has been lodged against AAP member Savita Anand and others for allegedly sharing a fake video on EVM tampering. Savita Anand, who describes herself as a member of AAP’s Social media team, had tweeted a video that proclaimed: "Expose in International Media: Modi, in a bid to reverse losses in 200 Lok Sabha seats, has changed EVMs (electronic voting machines) in them. Former CEC OP Rawat: There is no means to hack EVMs. They are totally tamper proof. He added that the EVMs are stand-alone machines which go in factory mode if one tries to hack them.

Pawar Playing Key Role in Forming Alternative Government: NCP | Claiming that the BJP-led NDA will fall short of a simple majority after the Lok Sabha poll results, the NCP on Wednesday said party chief Sharad Pawar is playing a key role in the formation of an alternative regime. NCP chief spokesperson Nawab Malik also said Pawar has repeatedly made it clear that he was not a claimant for the prime minister's post given his party's limited strength.

Karnataka Congress MLA Dr K Sudhakar: This is the stand that I took when this alliance was formed. I said on on the day 1 that Congress-JD(S) alliance was purely based on electoral requirements. It is a very unholy alliance, this is what I have been saying since day 1. Rajasthan Chief Minister Ashok Gehlot Wednesday said the Congress will accept the Lok Sabha election results with "humility", but maintained that exit poll projections have been wrong several times. He also accused the BJP of not doing issue-based politics and trying to polarise voters during the elections. "Prediction by exit polls have gone wrong several times. Good results (for the Congress) will come out tomorrow. We believe that the results will be in our favour,” he said.

The Supreme Court on Wednesday stayed till May 28 the arrest of Barrackpore BJP candidate Arjun Singh in several criminal cases, which he alleges the West Bengal Police filed against him motivated by political vindictiveness. Singh's counsel informed the court that 11 cases had been registered against him in May. The Bharatiya Janata Party (BJP) candidate contended before the court that he is being deliberately prevented from being present on counting day on Thursday.

BJP senior leader Ram Madhav: People want Modi ji back as PM, we'll form a strong government again, together with our NDA partners. They (Congress) are looking for excuses for their impending defeat tomorrow, they have blamed EC, now they are blaming EVMs, tomorrow they'll start blaming voters also. Union minister D V Sadananda Gowda claimed on Wednesday that the Congress-JD(S) coalition government in Karnataka would collapse after the Lok Sabha poll results and HD Kumaraswamy would be the chief minister only till May 24 morning. Gowda, a former Karnataka chief minister, also said the stage would be ready for the formation of a new government in the state after that. "Kumaraswamy will be the chief minister of Karnataka till tomorrow evening only. Tomorrow evening or by day-after-tomorrow morning, because if he does not get to sleep in the night...so day-after-tomorrow morning, hundred per cent Kumaraswamy will step down," he said. Speaking to reporters here, the BJP leader said, "The stage will be set for the formation of a new government." New Delhi: The time tested leaders of the BJP won't be seen this time around in the electoral battle. As the counting of the votes takes place, News 18.com lists the veterans who are not in the fray.

The MHA advisory asked states/UTs to take adequate measures for the security of strong rooms and venues of counting of votes. This is in the wake of calls given and statements made in various quarters for inciting violence and causing disruption on the day of counting of votes.

Ministry of home affairs alerts state chief secretaries and DGPs regarding possibility of eruption of violence in different parts of the country in connection with the counting of votes tomorrow. MHA asks states and UTs to maintain law and order, peace and public tranquility. 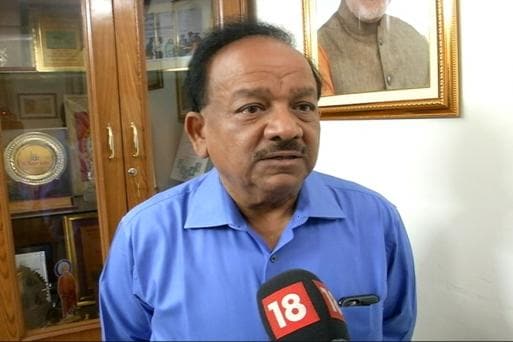 The News18-IPSOS survey forecast a win for the NDA on 336 seats in total while it predicted 82 Lok Sabha seats for the United Progressive Alliance (UPA).

A day before counting, BJP MP state president said that people want PM Modi to be sworn in again. “The public has made the decision and only mere announcement is remaining. We would win over 26 seats in MP,” he said.

Counting of polled EVMs of six parliamentary constituencies in Mumbai is going to be held tomorrow (23rd May) at three locations. NESCO Complex Goregaon, Udayanchal School Vikhroli and New Shivdi Warehouse, Shivadi East. For this, Mumbai Police has deployed more than 1,500 officers and staff at these locations including CRPF, SRPF, QRT, RCP.

Punjab: Sweet shop workers prepare laddoos in Ludhiana ahead of results tomorrow. Shop owner says "We've received order of 10-12 quintal of laddoos from BJP, Shiromani Akali Dal and Congress. The orders have been coming in right after the exit polls." Congress leader Abhishek Manu Singhvi: I read out VVPAT slips have been counted due to either non-display of result from control unit or under rule 56 D of conduct of polls rule or whatsoever 'the reason shan't be included in draw of lots for mandatory verification of VVPAT slips'. What's the reason?

Opposition Sour Losers, Desperation Over VVPAT Issue Indication of Their Defeat: Ram Vilas Paswan | Union Minister and BJP ally Ram Vilas Paswan Wednesday dubbed the opposition "sour losers" and claimed that their "desperation" over the VVPAT issue was an indication of their defeat in the Lok Sabha polls. Leaders of 22 opposition parties met the Election Commission on Tuesday ahead of the Lok Sabha election results and demanded verification of VVPAT slips of randomly-selected polling stations before the counting of votes begins Thursday. The EC on Wednesday rejected the demand.

Amit Shah: Some opposition parties are giving objectionable statements like 'raising arms' and 'shedding blood of the river' when elections are not favorable.

Amit Shah: While taking proactive steps on the issue of disruption in EVMs, the Election Commission has publicly challenged and invited its performance. But that opposition was not accepted by any opposition party.

Amit Shah: The Opposition started the polling on the subject of EVM after six phases of polling ended. It became more intense after the exit poll. Exit poll is done not by EVMs but by asking questions to the voter. So, depending on the exit poll, how can you ask questions on the credibility of EVMs?

Leaders of as many as 22 opposition parties met the Election Commission (EC) on Tuesday and demanded verification of VVPAT slips of randomly selected polling stations before the counting of votes polled in the just-concluded Lok Sabha election begins on May 23. They also demanded that if any discrepancy is found during VVPAT verification, 100 per cent counting of the paper slips of VVPATs of all polling stations of that particular Assembly segment should be done and compared with the electronic voting machine (EVM) results.