Madhya Pradesh Floor Test LIVE Updates: The Madhya Pradesh Assembly was adjourned till March 26 today amid the demand by BJP MLAs to hold a floor test as directed by Governor Lalji Tandon.

Madhya Pradesh Floor Test LIVE Updates: The Madhya Pradesh Assembly was adjourned till March 26 today amid the demand by BJP MLAs to hold a floor test as directed by Governor Lalji Tandon. Just after the brief address of the governor, MLAs of the BJP raised the demand for a floor test, triggering an uproar. Minister for Parliamentary Affairs Govind Singh raised the issue of coronavirus threat in the country and also mentioned the central government's advisory, following which the Speaker accepted Singh's plea and adjourned the House till March 26.

Earlier, Madhya Pradesh Chief Minister Kamal Nath wrote a letter to Governor Lalji Tandon, saying a trust vote would be “undemocratic” as Congress MLAs were held captive by the BJP. The chief minister also said it did not lie within the domain of the Governor to interfere with the functions of the Speaker.

Decision on Floor Test up to House: Expert | Constitutional expert and former secretary general of Lok Sabha, Subhash Kashyap says, "Nobody in the Constitution has an absolute authority on the matter. The Governor is within his rights to send a message to the assembly under Article 175 (2) of the Constitution, to conduct a floor test. Now it is the assembly's decision on what it wants to do. Speaker of the House is only the representative of the House. It is the House which has the ultimate say.” Click here to read more

CLP to Meet at CM's House Today | The Congress Legislative Party will meet at chief minister Kamal Nath's residence in Bhopal at 7 pm.

Shivraj Singh Meets Governor, Demands Immediate Floor Test | "We have come here to inform the governor that we cannot have a minority government at the helm and we are requesting the Governor to hold a floor test at the earliest," said former CM Shivraj Singh Chouhan. BJP veteran leader's statement came soon after filing a petition in Supreme Court seeking a floor test in MP. However, the SC will hear the matter tomorrow.

Digvijaya Singh Meets Governor in Bhopal | "I share a very good relationship with the Governor. It was a courtesy meet and we did not discuss politics," said senior Congress leader Digvijaya Singh after BJP moved to SC demanding a floor test in the state. SC to Hear BJP's Petition on Floor Test Tomorrow |  After nine BJP MLAs along with former CM Shivraj Singh Chouhan moved to the Supreme Court and sought for a floor test in Madhya Pradesh within 48 hours, the apex court stated that they will hear the matter tomorrow.

BJP Moves SC, Seeks Floor Test in 48 Hours | Soon after the Madhya Pradesh Assembly was adjourned, nine BJP MLAs along with Shivraj Singh Chouhan have moved to the Supreme Court and sought for a floor test in the state within 48 hours.

Amid Coronavirus scare, Congress MLAs were seen wearing protective masks during the Budget Session in Madhya Pradesh Assembly today, while hardly anyone from the BJP opted for it. Medical Team Arrives at Bengaluru Resort | A three-doctor team has arrived at the resort in Bengaluru where the 19 Congress rebel MLAs were holed up. Sources claimed that heart checkup related medical aids were also moved while one ambulance was given way to the resort.

Madhya Pradesh Governor Lalji Tandon Arrives at Assembly in Bhopal. He was welcomed by the incumbent Chief Minister Kamal Nath.

Amid Coronavirus Outbreak, MLAs Wear Mask at Assembly | As the number of cases of COVID-19 rapidly increase in India, MLAs in the Madhya Pradesh Assembly were seen wearing protective masks.

Floor Test Today Will be Undemocratic, CM Kamal Nath Writes to Governor | As the Madhya Pradesh Assembly heads towards a stalemate, Chief Minister Kamal Nath wrote a letter to Governor Lalji Tandon claiming that having a floor test today will be undemocratic since MLAs are being held captive in Bengaluru. 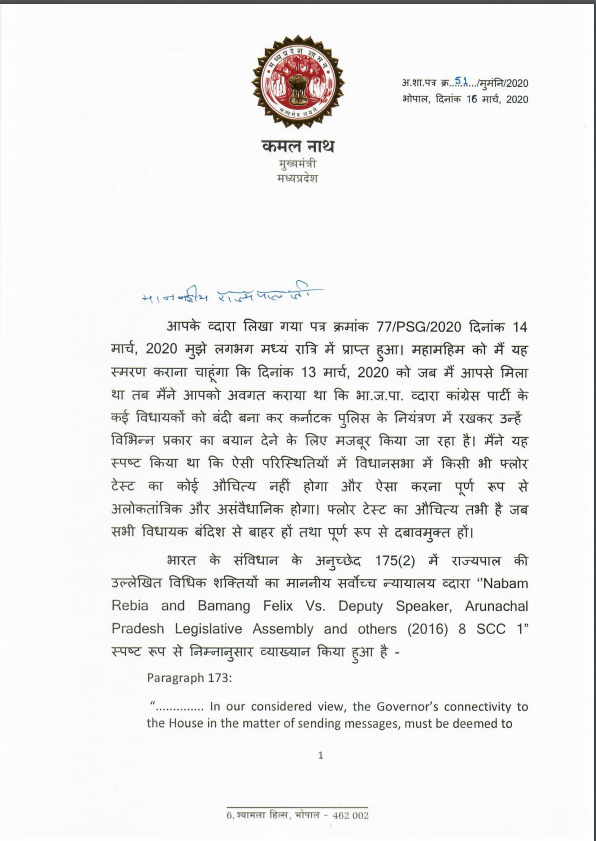 Former CM Shivraj Singh Chouhan arrive at the Assembly in Bhopal accompanied by other BJP MLAs.

Congress MLAs arrive at Assembly in Bhopal amid speculation over floor test. Rebel MLAs in Bengaluru May Not Come to Bhopal | Sources in Jyotiraditya Scindia camp claim that 22 Congress MLAs who resigned last week may not be coming to Bhopal, reports PTI.

MLAs Arrive at Assembly in Bhopal | As uncertainty looms over floor test, BJP MLAs start arriving at the Assembly. These MLAs were brought to the assembly in buses. Security Beefed up Outside Madhya Pradesh Assembly, Ahead of Budget Session

Visuals from Madhya Pradesh Assembly in Bhopal; The Madhya Pradesh Governor yesterday wrote to Chief Minister Kamal Nath stating that voting during the trust vote in the Assembly should be done by the 'raising of hands' method. pic.twitter.com/szDVxA442w 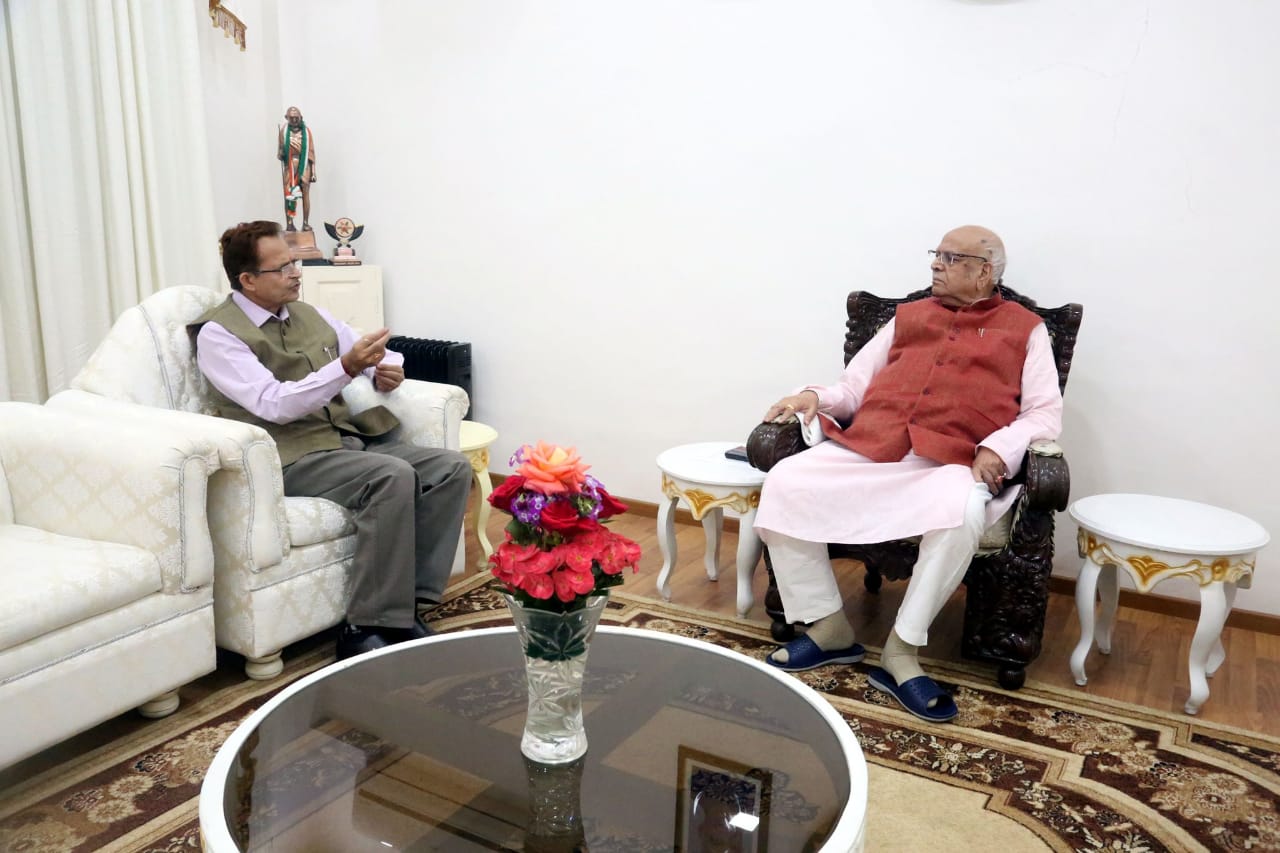 Rebel MLAs in B'luru Are Being Harassed, Alleges Congress| Madhya Pradesh Congress Minister PC Sharma said that the rebel MLAs who holed up in Bengaluru are being hypnotized and are not allowed to come to Madhya Pradesh.

Madhya Pradesh Minister PC Sharma: They (rebel Congress MLAs who are kept in Bengaluru) are being hypnotized & terrorized and are not allowed by (some people) to come to the state, their families are being harassed. (15.03.2020) pic.twitter.com/Yos8OT3sRl

'Raising of Hands' Method To be Used During Trust Vote| Madhya Pradesh Governor, Lalji Tandon has written to CM Kamal Nath stating that for voting during the trust vote in the Assembly should be done by the 'raising of hands' method.

Madhya Pradesh Governor has written to CM stating that for voting during trust vote in the Assembly should be done by the 'raising of hands' method. The letter also states that BJP has mentioned in a letter to the Guv that electronic voting system is not available in the Assembly

MP Budget Session Scheduled | The budget session of the state assembly is scheduled to begin from Monday. The governor has directed the floor test in the wake of resignation of 22 MLAs of the Congress on March 10.

Suspense Over MP Floor Test Continues | While the suspense over floor test in Madhya Pradesh continues, Chief Minister Kamal Nath said, "the Governor told me that the proceedings of the state assembly should be carried out smoothly. So I told him that I will talk to the speaker in this regard on Monday morning,"  When asked if the floor test will be conducted on Monday as directed by the governor, the chief minister said the speaker will take a decision on this.

Madhya Pradesh BJP MLAs, who were staying at ITC Grand Bharat Hotel in Gurugram, Haryana reached Bhopal on Sunday night.  While commenting about the ongoing situtation in Madhya Pradesh, BJP leader Sahasrabuddhe said the chief minister should learn from the BJP which asked its leaders to step down when it failed to garner majority support in Karnataka and Maharashtra.

A view of the MP assembly (PTI)

Nath had called on Tandon late last night amid the suspense over the floor test necessitated by the exit of Congress leader Jyotiraditya Scindia and 22 other leaders that plunged the state government into crisis.

Coming out of the Raj Bhavan at around 12.20am, Nath told reporters that the governor had called him for a discussion. "The governor told me that the proceedings of the state assembly should be carried out smoothly. So I told him that I will talk to the speaker in this regard on Monday morning," he said.

Asked if the floor test will be conducted on Monday as directed by the governor, the chief minister said the speaker will take a decision on this.

Nath said he has already communicated to the governor in writing that his government is ready for the floor test but the MLAs held "captive" should be released first.

After 22 Congress MLAs submitted their resignations last week, Tandon had on Saturday directed Nath to seek a trust vote just after his (governor's) address on the first day of the Budget session beginning Monday.

In his order, the Governor said: "The Madhya Pradesh Assembly's session will commence at 16 March, 2020, at 11 am, and after my address to the assembly, the first work to be conducted will be voting on trust vote.”

He added that the floor test will have to be completed on March 16 and the exercise cannot be "deferred, delayed or suspended".

The Congress alleges that these 22 MLAs who submitted their resignations are being held "captive" by the BJP.

In a letter to Union home minister Amit Shah, Nath urged him to ensure the "release" of 22 Congress legislators he alleged were being held "captive" in Bengaluru.

“Please use your power as Union home minister so that 22 Congress MLAs held captive can safely reach Madhya Pradesh and participate in the Assembly session beginning from March 16 without any allurement and fear," the four-page letter, shared by the Congress with the media, said.

Nath assured Shah in the letter that his Congress government in the state will provide excellent security to these 22 MLAs, if they are "released", referring to the demand of CRPF cover for the legislators.

The CM added that on March 3, BSP MLA Rambai and his family members were freed from the "captivity" of BJP leaders in Gurugram (Haryana). Later, three Congress MLAs and an Independent were taken to Bengaluru by BJP MLA Arvind Singh Bhadoriya as was evident from the list of passengers of the charter plane, he alleged.

On March 9, 19 MLAs were taken to Bengaluru by BJP leaders by three charter planes, Nath claimed. Their "personal communication facilities" (mobile phones) were taken away and they were held captive and the Karnataka BJP is bearing the expenses of their stay in Bengaluru, he alleged.

"This is an unprecedented situation" because on the one hand the BJP is holding them captive and on the other hand it is demanding a floor test, Nath said, adding that a trust vote has no meaning in this situation.

“I am concerned about the safety of these MLAs and in my opinion, floor test in assembly is meaningless as 22 MLAs are being held captive,” Nath wrote.

Twenty-two Madhya Pradesh MLAs, supporters of Jyotiraditya Scindia who left the Congress to join the BJP, have resigned, reducing the Kamal Nath-led government to minority in the Assembly.

Madhya Pradesh Assembly Speaker NP Prajapati has accepted the resignations of six of these MLAs.