A two-day special session of the Maharashtra legislature will be held from July 2. The decision was taken in the first cabinet meeting held after Eknath Shinde took over as the new chief minister of the state, officials said. On the first day of the session, election to the post of Assembly speaker will be held, they added.

A trust vote was also likely to be held during the session, sources said, though there was no official Read More 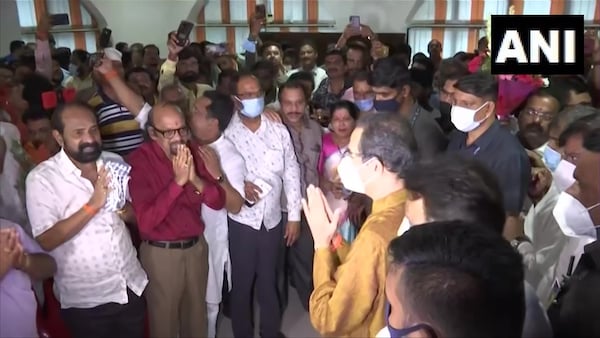 Going to Mumbai, Rest of the MLAs will Follow Tomorrow: Shinde

Maharashtra chief minister Eknath Shinde said he will be going to Mumbai today, while the rest of the MLAs will follow him tomorrow as the governor is holding an assembly session on July 3 or 4. “I am going to Mumbai. I’ve spoken to the BMC commissioner regarding the rain situation in Mumbai… Government is committed to bringing change in the lives of farmers. We will take forward development works in the state,” he said. Shinde further said the rest of the MLAs will follow tomorrow. “Governor has called a session on July 3-4. We’ve 170 MLAs and the number is increasing. We have a comfortable majority in the assembly,” he added. ANI

The manner in which Govt has been formed & a so-called Shiv Sena worker has been made CM, I had said the same to Amit Shah. This could’ve been done respectfully. The Shiv Sena was officially with you (at that time). This CM (Eknath Shinde) is not a Shiv Sena CM: Uddhav Thackeray

Former CM Uddhav Thackeray, speaking after being replaced by Eknath Shinde following an internal party rebellion, said he was upset with the way the government had been formed, and that the party had been kept aside while a ‘Sainik’ was made chief minister. He also asked the new dispensation to ‘carry on the good work started by the MVA alliance’ and expressed his fear for the Aarey colony amid announcement of reshifting the metro car shed project there.

'We have not shut our eyes', SC on Shiv Sena plea seeking suspension of rebel MLAs

The Supreme Court on Friday agreed to hear Shiv Sena chief whip Sunil Prabhu’s plea seeking suspension of 16 MLAs, including Eknath Shinde, from the Maharashtra Assembly till the disqualification proceedings initiated against them are decided and also a direction to restrain delinquent MLAs from entering the Assembly.

Senior advocate Kapil Sibal, representing Prabhu, mentioned the matter before a vacation bench comprising Justices Surya Kant and J.B. Pardiwala. Sibal submitted that there was no merger of the Shinde faction with the BJP and the moment Eknath Shinde was sworn in, he violated the Tenth Schedule (anti-defection law) of the Constitution.

Sibal said: “He is not the party….It is not a dance of democracy.” Justice Kant said: “We have not shut our eyes…we will examine.” The bench agreed to take up the matter on July 11 along with the Shinde faction petitions challenging the disqualification proceedings against them.

It was just a span of two hours that sealed the fate of Maharashtra’s new deputy chief minister Devendra Fadnavis. As the state’s political crisis came to an end with the exit of Uddhav Thackeray and his bête noire Eknath Shinde being elevated as chief minister, what took many by surprise was the BJP’s decision to back the rebel leader for the top post and not Fadnavis, who would have been at the helm for the third time. READ MORE

Devendra Fadnavis, the new Maharashtra deputy chief minister, overturned former chief minister Uddhav Thackeray’s decision to move the Metro 3 car shed out of the Aarey Milk colony and ordered the restart of the Jalyukt Shivar Abhiyan, the flagship water conservation scheme from his previous regime as the CM, according to reports. READ MORE

Devendra Fadnavis, the new Maharashtra deputy chief minister, overturned former chief minister Uddhav Thackeray’s decision to move the Metro 3 car shed out of the Aarey Milk colony and ordered the restart of the Jalyukt Shivar Abhiyan, the flagship water conservation scheme from his previous regime as the CM, according to reports. READ MORE

SC to hear on July 11, along with other pleas, fresh plea of Uddhav Thackeray camp MLA Sunil Prabhu seeking suspension of dissident Shiv Sena MLAs from Maharashtra Assembly and restraining them from entering the House or taking part in proceedings till their disqualification decided.

Maharashtra CM Eknath Shinde will be meeting with MLAs in Goa at 11 AM, sources said.

Calling it as a victory of the Hindutva ideology of Balasaheb Thackeray and teachings of Anand Dhige, Maharashtra Chief Minister Eknath Shinde has said that people will come to know if he visits ‘Matoshri’. Shinde after being sworn in as the Chief Minister, came back to Goa Thursday late night and joined the rebel MLAs at the Taj hotel in Panaji.

The rebel MLAs of Shiv Sena, who forced Uddhav Thackeray to resign as Chief Minister, will continue camping in Goa and may go back before the floor test. Shinde said that as they (BJP and rebels) have 175 MLAs, floor test will be just a formality and they will win it easily. “We have 175 numbers, the picture is clear,” he said. “When the time comes, people will come to know if I visit ‘Matoshri’,” he said while replying to a question.

NCP chief Sharad Pawar on Thursday claimed that BJP leader Devendra Fadnavis did not appear to be happy while accepting the deputy chief minister’s post in Eknath Shinde’s government.While rebel Shiv Sena leader Shinde was sworn in as the new chief minister of Maharashtra following the collapse of the Shiv Sena-NCP-Congress government, Fadnavis, a former CM who had said he would remain outside, took oath as Shinde’s deputy.

“I think Fadnavis has not accepted the number two position happily. His facial expression said it all,” Pawar told reporters in Pune.”(But) He is from Nagpur and he has worked as a `swayamsevak’ (with the RSS) and there, when an order comes, it has to be followed,” the NCP chief said, adding that Fadnavis might have accepted a junior position due to this`sanskar’ (values).

Atwo-day special session of the Maharashtra legislature will be held from July 2. The decision was taken in the first cabinet meeting after Eknath Shinde took over as the new chief minister of the state, officials said. READ MORE

From leading a rebellion after feeling side-lined by the Thackerays to engineering a split in the party and forcing Uddhav Thackeray to step down, Eknath Shinde is the man who rose from humble beginnings to become Maharashtra CM. READ MORE

Goa Chief Minister Pramod Sawant on Thursday congratulated Shiv Sena leader Eknath Shinde for taking over as the new CM of Maharashtra. Sawant, a BJP leader, took to social media to congratulate Shinde and his party colleague Devendra Fadnavis, who took oath as chief minister and deputy CM of Maharashtra, respectively, in Mumbai. Heartiest congratulations to Shri Eknath Shinde ji on taking oath as the chief minister of Maharashtra and Shri Devendra Fadnavis ji as Deputy Chief Minister of Maharashtra, he said. I am sure under your able leadership and with the support and guidance of Hon’ble PM Shri Narendra Modi ji, Maharashtra will march ahead on the path of all round development, Shinde said.

Patient Eye on Shiv Sena, CM Post for Shinde: Devendra Fadnavis Has Made Amends in How He Does Politics

The political turmoil that led to Uddhav Thackeray’s resignation as Chief Minister and paved the power path for the BJP and Shiv Sena faction led by Eknath Shinde has established former CM Devendra Fadnavis as the person in control of political dynamics in the state. READ MORE

The 10-day Maharashtra political crisis ended with two back-to-back surprises: one, Eknath Shinde, and not Devendra Fadnavis, being sworn in as the chief minister and second, Fadnavis agreeing to be his deputy even after announcing that he would stay out of power. READ MORE

'We have not shut our eyes', SC on Shiv Sena plea seeking suspension of rebel MLAs

Patient Eye on Shiv Sena, CM Post for Shinde: Devendra Fadnavis Has Made Amends in How He Does Politics

communication in this regard. Shinde told officials in the meeting that development projects need to be expedited. Elected representatives and the administration need to work hand in hand, he was quoted as saying in the official statement.

“We need to live up to the faith of the citizens,” the CM said. Shinde also said that having an experienced hand like Deputy chief minister Devendra Fadnavis in the cabinet will help his administration. “Metro and Samruddhi expressway projects should be expedited,” the chief minister said.

Fadnavis asked the bureaucracy to expedite administrative decisions, the statement said. The chief minister and his deputy also took stock of the ongoing sowing operations in the state.

Shiv Sena leader Eknath Shinde on Friday said not only his colleagues in the Assembly but also Maharashtra is happy that “Balasaheb Thackeray’s Shiv Sainik has become the chief minister”. He thanked Prime Minister Narendra Modi and Union Home Minister Amit Shah among others for reposing confidence in him.

Backed by the BJP, Shinde on Thursday took oath as the chief minister of Maharashtra with the support of a breakaway faction of Shiv Sena MLAs and Independents. After taking the oath in Mumbai, Shinde returned to Goa at midnight to meet his colleagues who had supported him in rebelling against Uddhav Thackeray.

Interacting with reporters at the Goa Airport, he said Maharashtra could see this day because of his 50 MLAs. “My colleagues and entire Maharashtra is happy that Balasaheb Thackeray’s Shiv Sainik has become the chief minister of the state,” Shinde commented.

Asked about cabinet expansion, he said the future strategy would be discussed in the meeting with his colleagues. Later, while interacting with reporters at the resort in Goa’s Dona Paula, the newly sworn-in Maharashtra chief minister thanked Modi, Shah and BJP leader Devendra Fadnavis for reposing faith in him.

“Fadnavis has shown a big heart by giving me the opportunity to become chief minister,” Shinde said. Shinde said he will ensure ample developmental work in the constituencies of all the 50 MLAs who supported him. The Shiv Sena leader also said he is well aware of the experience of these legislators during the last two-and-a-half years.