The trends in the first half of the day suggest that the Congress is losing big in the state of Maharashtra.

The trends in the first half of the day suggest that the Congress is losing big in the state of Maharashtra. The party could not even manage to maintain the leads on any of 48 Lok Sabha seats in the western state.

As the counting began, Congress had zero leads while the count of BJP-Shiv Sena kept on increasing as the counting went ahead. It had a lead in Sindhudrg-Ratnagiri for a while, but could not maintain it. Congress strongman Ashok Chavan was expected to hold the foot in this election. Even he is trailing behind since morning. Thus, currently there is zero hope for the Congress in the state of Maharashtra, suggest the trends.

Baramati has been the bastion Pawar family for years. NCP supremo Sharad Pawar himself had held the seat of Baramati for more than three terms and has also been union minister. His daughter Supriya trailing in the counting shows that NCP is losing its stronghold in Baramati. Sharad Pawar has also faced a lot of criticism after the candidature of his grandson Parth was declared from Maval. He is trailing while Shrirang Barne of Shiv Sena is leading in Maval.

Congress strongman Ashok Chavan who had retained Nanded seat in Modi wave is trailing in Nanded.

Maharashtra is one of the most important states to look for in the results table. The sends 48 MPs to the parliament including six from the financial capital, Mumbai, of the country. The farmer distress and drought has been issues that has remained into picture since the inception of the state in 1960. Few of the key contests in the state include Urmila Matondakar-Gopal Shetty, Nitin Gadkari-Nana Patole, Milind Deora-Arvind Sawant. Apart from these there are many important seats to lookout for in these elections.

In 2014 elections, BJP won 23 seats while their ally Shiv Sena won 18 seats out of total 48 seats. Seven seats were won by other parties. While the News18 IPSOS exit polls suggest that BJP-led NDA alliance will win 42-45 seats in this elections.

Here are the latest developments from the state-

-Chandrakant Khaire of Shiv Sena leading from Aurangabad, the lone seat AIMIM was leading on. Congress still hopes for Chandrapur to win.

-NCP leader Sharad Pawar in his statement said, “I accept people's decision but this is also a fact that people had their doubts about EVMs. Congress had performed really well in Rajiv Gandhi's time, but nobody doubted elections then, same when Atal Bihari Vajpayee won.”

- The MNS founder, Thackeray addressed many of the public rallies in the state criticizing Modi-Shah. His staunch criticism and unique style of presentation caught attention of National media, too. However, his reaction after the results is just in two words - 'Beyond Rationale!' 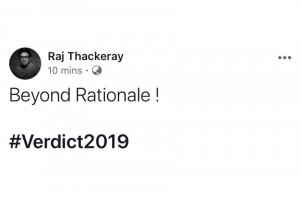 -NDA officer bearers have given official statements as the NDA leads towards victory.

Chief minister of the state, Devendra Fadnavis also congratulated PM Modi. In his official statement he said that I thank the people of the country and of Maharashtra for their trust in us.

“We had already said that there is a silent wave in the country which will translate into a Modi tsunami. This is an unprecedented victory for the BJP,” he said. He also mentioned that we have seen have seen pro-incumbency.

-Mumbai BJP President Ashish Shelar has said, “This was a battle between artificial intelligence and real intelligence. They were not connected to the issues of people. They did not know public sentiment.” He added, “Congress, NCP, MNS have utterly failed. We will do better in the coming Vidhan Sabha elections.”

Shiv Sena leader Sanjay Raut congratulated Narendra Modi for this huge success. He said, “First of all, I would like to congratulate PM Modi. Our alliance has performed very-well thanks to the leadership of Devendra Farnavis and Uddhav Thackrey.” He added, “People love Modi which is why we have got more seats than 2014. People have rejected Congress in various states.People have showed a lot of trust on Modi and that is why the celebration is being done from Kanyakumari to Kashmir.”

-NCP almost loses Maval while Baramati remains a tough fight for the party. NCP leader Nawab Malik has given a statement that the “religious polarisation is the reason for BJP's victory”. He has blamed Congress infighting for bad performance of Congress-NCP's poor performance in Maharashtra.

-Congress could not even manage to maintain the leads on any of 48 Lok Sabha seats in the western state.

-Jai Siddheshwar Mahaswami leads in Solpaur with 84868, Sushilkumar Shinde on second spot while Prakash Ambedkar on third spot. Ambedkar trails in Akola, too.

-Pawar family faces a backlash in both Baramati and Maval. Parth Pawar and Supriya Sule trailing while BJP leads in Baramati while Shrirang Barne of Shiv Sena leads in Maval. Sushilkumar Shinde trailing in Solapur.

-Ashok Chavan who was one a few candidates who withheld in Modi wave in 2014 elections is trailing behind Prataprao Patil of BJP in Vidarbha’s Nanded constituency. NDA leads on 28 seats.

-NDA gets a clear lead in Maharashtra over all the other parties. Shiv Sena is leading on 13 seats while BJP on 11 seats in the state. NCP leads three seats and Congress on just one. Shetti is still leading in Hatkanagale.

-The BJP seems to be very confident about their victory in the state of Maharahstra. The party has already erected the stages and Pandals in Mumbai and Pune where celebrations are supposed to take place. The trend can be tracked once the first round is completed. Nitin Gadkari’s house is all set for the celebration with the decorations and pandals.

-The bastion of Sharad Pawar, Baramati will be a key contest. Supriya Sule, a daughter of Pawar is contesting against Kanchan Kul pf BJP. This is expected to be a tough fight since the winning margin of Sule has dropped substantially in the last election from 45.9 to 6.5 per cent votes.

-In Beed, the caste arithmetic is expected to play the important role. BJP has an advantage of social engineering by late veteran leader Gopinath Munde. His daughter is contesting for her second term. She is in contest with NCP candidate Bajrang Sonawane. Maratha and Banajara, both the communities which constitute around 15 per cent of the voters, hold a potential to sway the results.