Manipur Election Results 2022 Updates:  The ruling BJP coalition is all set to return to power in the insurgency-hit state of Manipur, as it bagged 31 seats, as per the latest ECI data. Chief Minister N Biren Singh defeated his nearest Congress rival, P Saratchandra Singh, by 18,271 votes in the Heingang seat. The National People’s Party has won 3 seats and leading in 6, while the Naga People’s Front has won 4 Read More

“Despite being in government in three states UP, Goa, Manipur, the vote share of BJP has increased,” said Prime Minister Narendra Modi while addressing BJP workers at party headquarters in Delhi.

#WATCH | Celebrations at the residence of Manipur CM N Biren Singh in Imphal as BJP leads in the state as per official EC trends. CM N Biren Singh leading in Heingang by 18,271 votes. pic.twitter.com/4AUbchWfAm

Prime Minister Narendra Modi Tuesday said Manipur’s new identity is based on skills, start-ups and sports, and the state is becoming a gateway for international trade. Addressing a virtual poll rally, Modi also said in the days to come, the BJP government will create a Rs 100-crore Manipur Start-up Fund as well as two special economic zones. READ MORE The BJP is in lead in the following constituencies

Thokchom Satyabrata has won from the Yaiskul constituency. Former cop Thounaojam Brinda is in the 3rd position here. 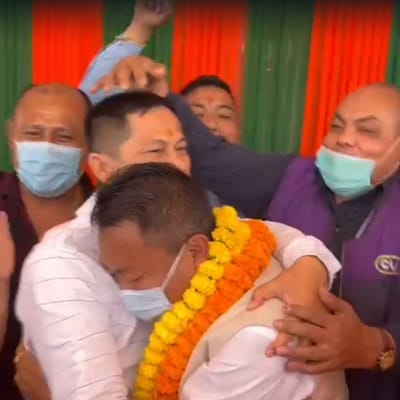 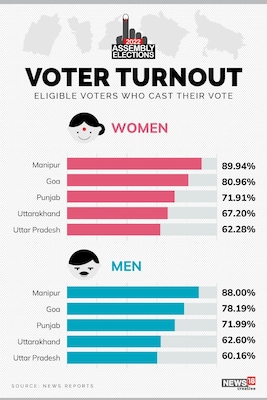 The BJP is leading the following 23 seats in Manipur.

K Onkholer, husband of ace boxer Mary Kom, is trailing in Saikot assembly constituency. Onkholer had said he decided to step into politics after witnessing the backwardness of his constituency.

The JD(U) continues to lead in Bishnupur, Thangmeiband, and Tipaimukh.

Behind BJP, which is soaring far ahead, and the NPP, the NPF is leading in 5 seats.

The seats where NPF is leading – Mao, Phungyar, Tengnoupal, Ukhrul.

Kimneo Haokip Hangshing of the KPA from Saikul, Kangpokpi district of Manipur is leading. Saikul is part of Outer Manipur Lok Sabha/Parliamentary constituency. Leaders of the new party said Kukis, despite being a dominant force in at least 10 Assembly seats has been deprived of adequate political representation to protect their ethnic identity and ensure welfare.

The NPF takes over Congress in Ukrul constituency. Here are the seats where NPF leads:

Manipur Election Results LIVE Updates: What Is The Share of Women Candidates in Assembly Polls 2022? seats and leading in 1. Kuki People’s Alliance and Independents have won 2 seats each.

Counting of votes for 60 assembly seats in Manipur began at 8 am on Thursday under tight security and strict adherence to Covid-19 protocols, officials said.

The elections were held in two phases on February 28 and March 5 for the 60-seat Assembly. The ruling BJP and its two estranged allies — National People’s Party (NPP) and Naga People’s Front (NPF) — fought the elections separately.  In the 2017 election, Congress won 28 seats and the BJP 21. But the latter stitched an alliance with the NPP, NPF and other smaller parties to form the government.

The NPP and the NPF chose not to go for any pre-poll alliance, apparently to keep options open. While these two parties hope to improve upon their 2017 performance, the Janata Dal (United) has emerged as a third force among the smaller parties this time. The NPP and the NPF had won four seats each in the 2017 election with a strike rate of a little below 50%.

Polling for the first phase of Manipur Assembly elections in 38 constituencies was spread across five districts including Imphal East, Imphal West, Bishnupur, Churachandpur, and Kangpokpi. A total of 173 candidates, including 15 females, were in the fray for the first phase of polls on February 28. Voter turnout of 78.03 percent was recorded up to 5pm, when the polling concluded.

In the second and the final phase of Manipur Assembly polls on March 5, 92 candidates in 22 constituencies across six districts were in fray. The BJP fielded 22 candidates, followed by Congress (18), NPP (11), Janata Dal (United) and NPF (10 each). Altogether 12 independent candidates and nominees of Shiv Sena, NCP, CPI and several other parties also contested.

The turnout was recorded at 76.04 percent amid stray incidents of violence in some places before and after voting, election department officials said. Voting was held in 22 constituencies across six districts amid tight security and strict adherence to COVID-19 protocol.

Violence was reported from some places of the north east state hours before the second phase of polling commenced as a BJP supporter was gunned down allegedly by a Congress worker and a crude bomb exploded outside the residence of an expelled saffron party leader, police said. A 25-year-old succumbed to bullet injuries early on March 5 at a hospital, a police officer said.

Re-polling in 12 stations of five assembly constituencies – Khundrakpam, Saitu , Thanlon, Henglep and Churachandpur – in Manipur where polling was held on February 28 were also held on March 5 along with the second phase, as directed by the EC. The main reason for consideration of repolling was due to damage of EVMs by miscreants during and after the poll, EC statement said.