It is also an opportunity to keep one foot in the door for being the face of BJP in UP.

These were the words of Union Minister Smriti Irani in last Winter Session of Parliament, when she came under fire for her mishandling of Dalit scholar Rohit Vermula episode. She was accused of hurting Dalit sentiments, playing with the lives of minority students.

The episode also gave her a new nick name. But Smriti didn't give up. Whether it was on Twitter or on Facebook, she kept on giving it back as much she got it herself. She was engaged in a bitter war of words with Bihar Education Minister Ashok Choudhary who addressed her as 'Dear'.

Dear @smritiirani ji, when will we get New Education policy..?
When will year 2015 end in your calendar..? https://t.co/X20LhUsvCt

Many thought that Smriti was becoming a bigger political brand, a next in line of sorts to External Affairs Minister Sushma Swaraj. Till the duo of Modi—Shah struck! For all her political guiles, Smriti couldn't hold on to her HRD portfolio. NEWS18 learnt that the Modi wasn't too keen initially to move her out but agreed on BJP president Amit Shah's insistence.

But is Smriti the Textile minister a "Spinderella" as the latest headline for The Telegraph suggests? Or can can she bring in some of her image of being an "Äunty National" in her new portfolio as well. 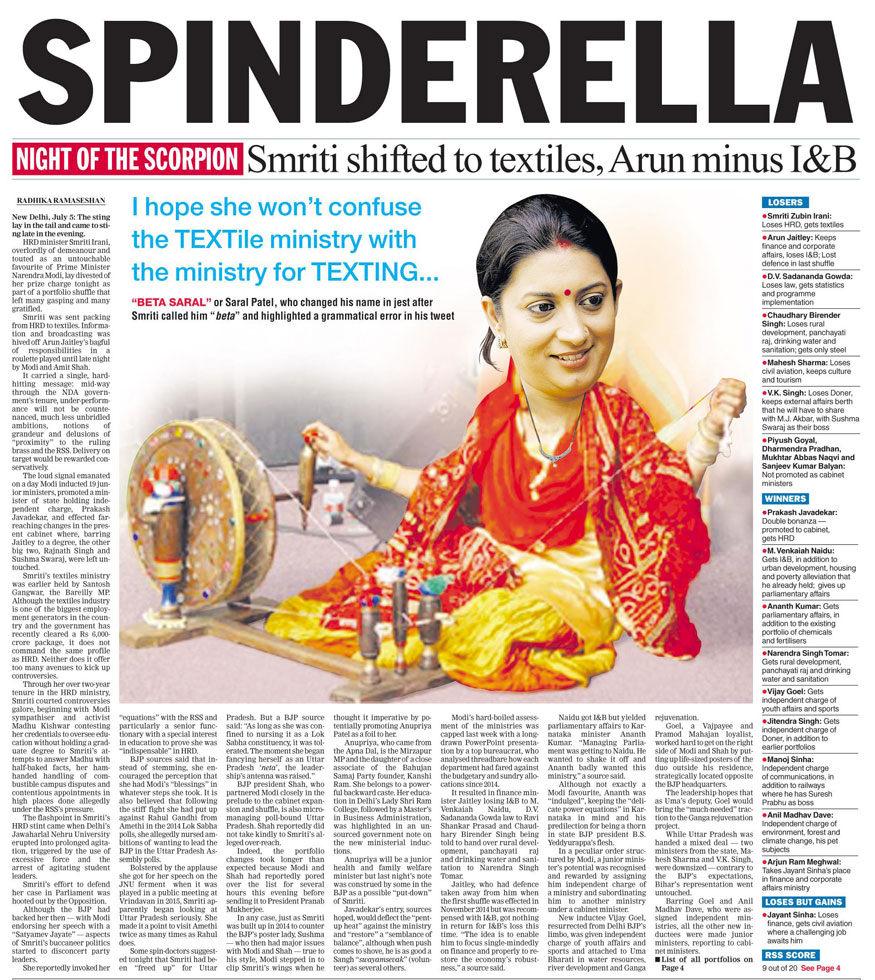 It may not necessarily be a bad deal for Smriti to be in Textiles Ministry. Her team believes that with the special focus on weavers community from Modi, textiles will be a key nodal ministry to implement Modi agenda. From Farukhabad to Barabanki to Mirzapur and Benares, in the politically crucial state of Uttar Pradesh, this can be the ministry which can really turn on the game.

It is also an opportunity to keep one foot in the door for being the face of BJP in UP. Team Smriti's calculation is that if the Congress pushes Priyanka Gandhi in the politically turbulent waters of UP in 2017, BJP will really not have any other option than Smriti. That's one reason why, while the media was pontificating over her demotion, she was meeting top officials of the Textiles Ministry at her residence in the morning itself. But then turning adversity or a loss into an opportunity is almost like second nature for Smriti. After all, from being an anti-Modi leader in 2002 to taking on Rahul Gandhi in 2014, Smriti has never tasted electoral success. That though hasn't had any impact what so ever on her ever increasing self branding.

Bhupendra Chaubey has been a TV journalist for the past 12 years starting his career with NDTV. As a political journalist travelling across the length...Read More