'Only Patidars Were Shot Dead': Why Vote-Hungry Netas Are Scared of Mandsaur Farmers

Mandsaur is crucial to state politics today because over the last one year, after the killing of six farmer protesters, it has become the symbol of farmer distress in the state.

Mandsaur: In Madhya Pradesh politics, the Malwa-Neemar region is often called the gateway to power. Parties that do well in 66 assembly seats, which fall in this region, end up getting majority in the 230-member state assembly.

The epicenter of Malwa politics is Mandsaur. It has given three Chief Ministers to MP — Sunderlal Patwa, VK Saklecha, Kailashnath Katju — besides several other MPs and ministers.

No surprises then that both Congress and BJP have rushed in their star power to mobilise supporters in this sleeping town south-west of the state. Congress president Rahul Gandhi paid a visit just after farmer unrest in 2017, in which six farmers were shot dead by police. He returned again to exactly a year later, accompanied by senior national leaders and the entire leadership. Jyotiraditya Scindia, has since been coming here on quite regularly.

BJP President Amit Shah recently held a rally here. As did the state Chief Minister Shivraj Singh Chouhan on Saturday. And later during this week, Prime Minister Modi is also expected to hold a massive rally in Mandsaur.

The town is crucial to state politics today because over the last one year, after the killing of six farmer protesters, it has become the symbol of farmer distress in the state. MP being primarily a rural economy or, to be more specific, a farm driven state has slowly over the past few months seen farmers in economic distress consolidate as a separate political constituency.

Many farmer unions, with various political affiliations, have made multiple trips to Mandsaur in an attempt to address farmer issues. So, the signals issued by crop growers from Mandsaur becomes a beacon for other farmers in the state.

Mandsaur, with the eight assembly seats in it and around, is hosting several curious political battles. There is a battle going not just between Congress and the BJP, farmers since last one year are pitched against the state, a chunk of Patidars are up against the BJP, upper castes have pitched themselves against everyone else, and among the sizeable Rajput community, the fight seems to be between Congress and NOTA.

“Around 10 to 15 years back when farmers came to the mandi to sell their crop, they would go straight to the nearest motorcycle showroom and buy motorcycles cash down. Today we don’t know how to pay our children’s school fees,” says Pappu Patel a farmer in Mandsaur town.

“There are 16 engineers and diploma holders like me, in just this colony alone, who took to farming and now are under debt. Apart from the money, we have spent 2-3 years of our lives here. Now where will we go.” He did his BTech from Devi Ahilya Vishwavidyalaya in Indore.

He points towards his friends — Narendra Patidar who did his B Tech from RKDF college in Bhopal, and Sunil Patidar who studied agricultural science from Sam Higginbottom Institute of Agriculture in Allahabad — who are sitting close by. They are all under similarly huge debts with no means of paying them. 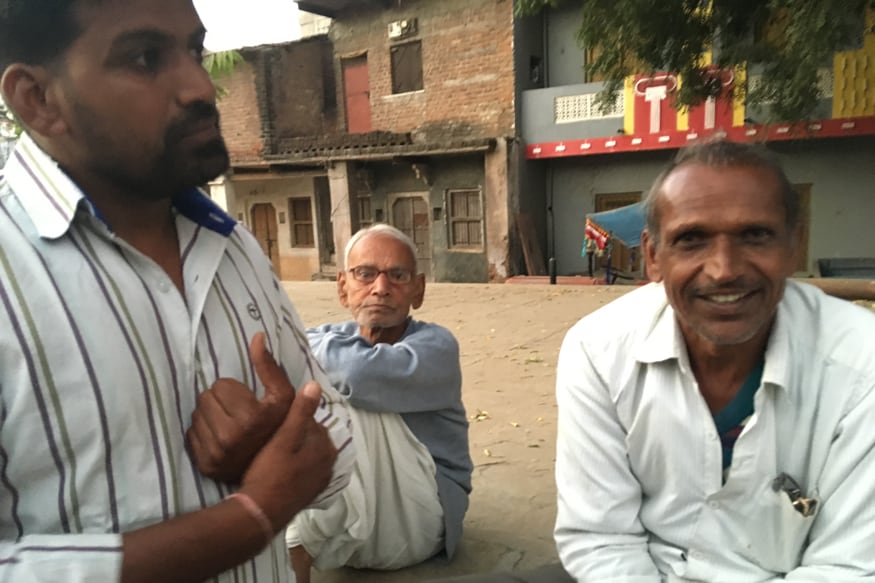 Narendra Patidar, a BTech from Bhopal

According to a study done by Down to Earth, around 71% of the state is dependent, directly or indirectly, on agriculture and "there is not a single district in Madhya Pradesh where farmers or producers have not gone down and farm labourers are not increased". According to NSSO, there are around 64 lakh farmers in the state nearly half of which are in debt.

“Why can’t we get electricity on time,” asks a farmer from Ratlam who has come to Mandsaur mandi to sell his crop of onions.

Mandsaur feels this shock of farm distress more strongly than other districts of MP. Family members of some of the youths killed in police firing last year don’t hide the fact that they have been going from village to village in Mandsaur, asking people to not vote for the BJP.

In village Takravad, Balaram, the uncle of 24-year-old Babloo, who was killed on June 6 last year, says in visible anger, “after they killed our boys, the ministers branded us as smugglers and bandits. They compared us to terrorists. Not one of the BJP leaders, from the current MLA to the Chief Minister, came to see us even. Now they ask us to vote for them! We’ll ensure that this government never gets elected again.”

With him is sitting Jagdish Patidar, whose younger brother Kanhaiyalal was killed in police firing. He asks, “Andolan sabne kiya par goliyan sirf Patidaron pe kyun chalayin [People from every community participated in protests. Why were only people from Patidar community shot dead]?”

The five farmers that were allegedly killed in police firing on June 6 last year were all Patidars, an OBC community that is spread across Gujarat and Madhya Pradesh, which is the backbone of agrarian sector in MP, and a section of which has constantly been up in arms against their erstwhile political patrons the BJP for over last three years.

“We voted for the BJP in 2013 [assembly polls] and in 2014 [general polls]. But what did the BJP give us in return? Our insurance money hasn’t come to us in the last three years. I have been to 50 meetings in various villages and everywhere the people say BJP won’t come back to power again,” says Jagdish.

Although one farmer in Pipliya Mandi, near which the firing incident happened, offers a different insight. “There is no doubt that farmers have suffered and some of them are longing for Congress to return, but when it comes to pressing the button on the EVM you’ll see they’ll all vote for the BJP again. Shivraj-Ji still connects with them on a level which no Congress leader has been able to match up to.”

Another thing that works in BJP’s favour is dissatisfaction among Congress workers over factional strife in the party. “The leaders caught in their own battles have forgotten to appoint important office bearers here. Some senior leaders are doing this deliberately to remote control and micro manage the constituencies, which in such a huge region is not possible. It sends bad message to ground workers,” said a Congress worker who recently switched over from the BJP.

The fact that Shivraj Singh Chouhan is a well meaning leader whose hands have been tied, is a resonant sentiment here. A farmer in Bhuda said, “This year I invested in pomegranate. The cost per fruit for us came out to be Rs 8. But I could only sell the crop at Rs 12 per per kg. And just in front of me my crop was loaded on a cart by a vendor and sold for Rs 80 per kg. Wouldn’t I feel angry? What will Shivraj Singh do in this case? Modi is the highest authority in the country. He banned currency notes and broke our backs. Could he not fix our crop prices in return?”

Incidentally, the same people also vehemently support Scindia, who has made several rounds of this region. “Had they nominated MaharajJi as the CM candidate, this would have been a no contest,” Suresh Patidar, a farmer in Pipliya Mandi says.

Shivraj Singh seems quite aware of his popularity on ground. At about 3 on Saturday afternoon Chouhan held a rally in Bhuda. In his speech he talked about being under attack from “various royal families” of Congress. “Congress is angry with me because I talk about farmers. They think what can this poor, thin framed, son of a farmer do for his people. But tell me are you angry with me,” he asked the crowd with responded with a resounding no. Though several farmers walking in huddles after the end of the rally expressed disappointment that the BJP in its manifesto did not match Congress’ promise of waiving off farmer loans in 10 days. ​