Parliament LIVE: Kovind Lays Down Roadmap for Next 5 Yrs; Focus on Triple Talaq, NRC and One Nation, One Poll

Parliament LIVE: President Ram Nath Kovind laid down the roadmap for the next five years as he discussed issues such as Triple Talaq, Nikah Halala, NRC, surgical strikes and One Nation, One Election in the joint session of Parliament today.

The Parliament’s Budget Session, which began on June 17, will continue till July 26. The Economic Survey will be presented on July 4 followed by the Union Budget for 2019-20 on July 5.

Rajya Sabha Adjourned | The Upper House is adjourned till 11:00 am on Friday.

Among the list of papers that will be laid on the table are ordinances on Triple Talaq and Aadhar.  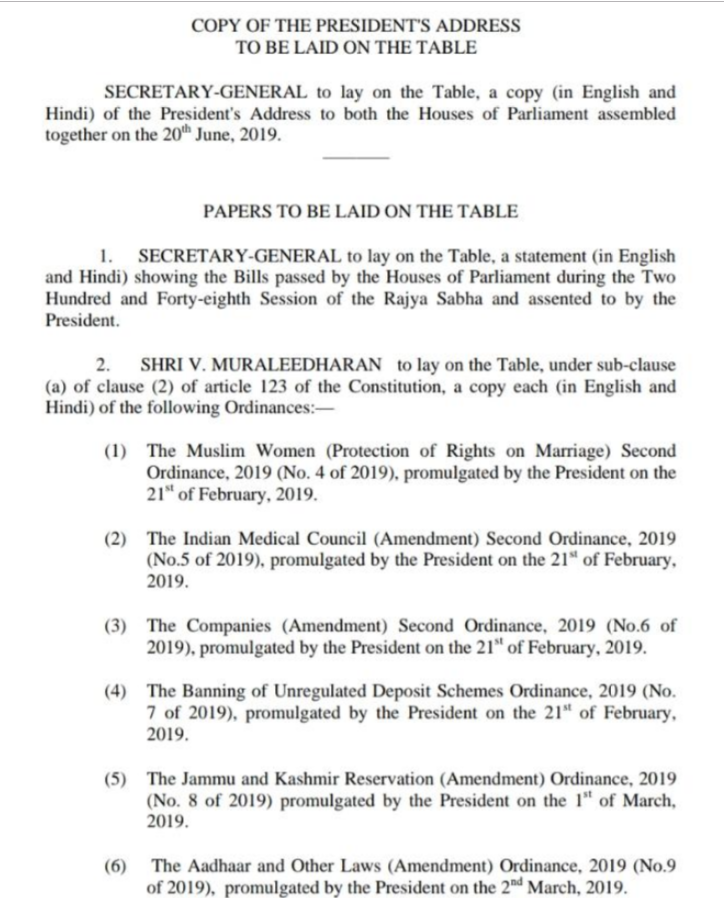 Prez Kovind Bats For 'One Nation, One Election' System | In his concluding remarks, President Kovind says that the need of the day is to bring in a "one nation one election system" so that the "country can grow faster".

The President also raises the contentious issues of the National Register for Citizens. "Foreigners entering India illegally are a great threat to internal security. My government has decided that the process of the NRC will be implemented on a priority basis in areas facing the infiltration problem."

Will Take All Possible Steps to Protect Ourselves: Prez Kovind | Addressing lawmakers of both the Rajya Sabha and Lok Sabha, Ram Nath Kovind says that India has demonstrated its intentions and capabilities by first carrying out surgical strikes and then the air strikes on terrorist target across the border, following the Pulwama attack. "In the future also, all possible steps will be taken to protect ourselves."

Zero Tolerance to Corruption: President Ram Nath Kovind | President Ram Nath Kovind stresses that there will be zero tolerance for corruption. "The campaign against black money will be carried forth at a faster pace, in the last two years, 4 lakh 25 thousand directors have been disqualified and 3 lakh 50 thousand dubious companies have been registered.

"Under the Prime Minister's Mudra Yojana about 19 crore loans have been given for self-employment, the scheme will now be expanded to 30 crore people," President Ram Nath Kovind says. 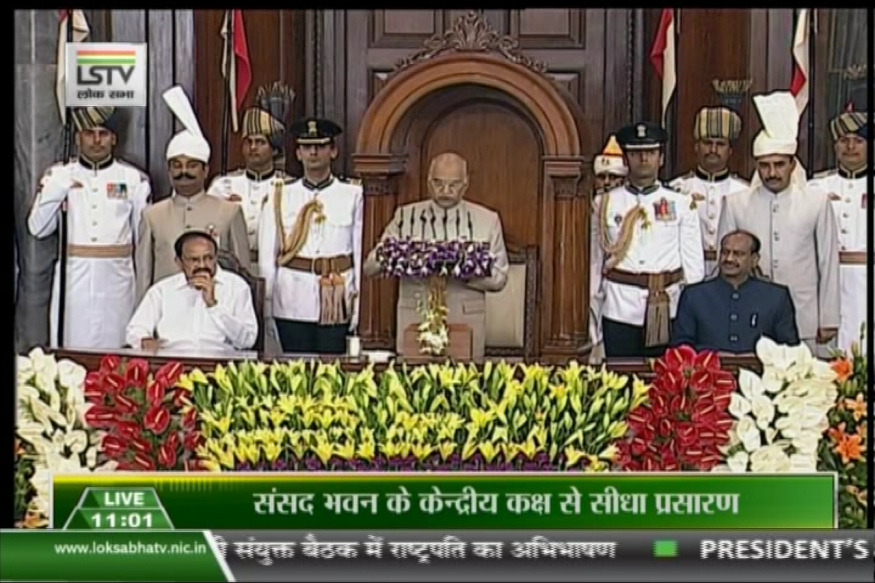 
Triple Talaq, Nikah Halala Must be Abolished, Says Prez Kovind | Highlighting women's empowerment as one of the highest priorities of the government President Ram Nath Kovind says, "To ensure equal rights for every sister and daughter in the country, eradication of practises like Triple Talaq and nikah halala is necessary. I would request all members to extend their support to these efforts to make the lives of our sisters and daughters more dignified and improved."

In his joint address to the Rajya Sabha and the Lok Sabha, President Ram Nath Kovind further says that investment is being made to strengthen rural India, increase productivity of the agricultural sector. "Another Rs 25 lakh crore will be invested in the coming years."

Jal Shakti Ministry a Positive Step Says Ram Nath Kovind | Highlighting the current water crisis in the country, President Ram Nath Kovind says that the government has taken cognizance of the issue. He hails the formation of the Jal Shakti ministry calling it a decisive step towards countering the crisis. 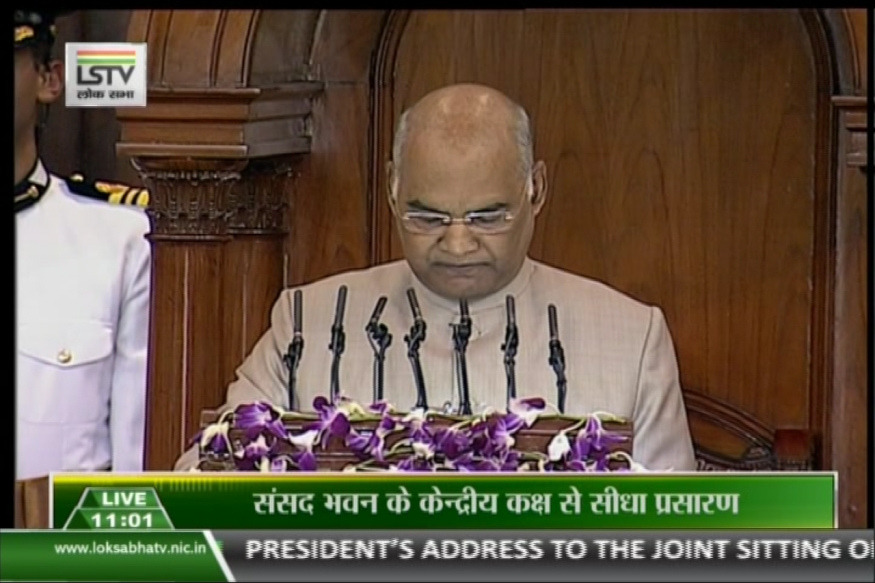 President Ram Nath Kovind Begins Parliament Address | President Ram Nath Kovind begins his address of the joint session of both the Houses at the Parliament. Kovind begins his address by congratulating the voters, newly-elected lawmakers, security forces and the Election Commission. "In this Lok Sabha more than half MPs are first-time lawmakers, the number of women MPs is at all time high at 78. This is unprecedented. It represents a New India," he said.

The President Ram Nath Kovind being led inside the Parliament ahead of his address to the joint session. Kovind in his speech to a joint session of Rajya Sabha and Lok Saba will outline the priorities of the Modi government and give a roadmap to fulfill those objectives. 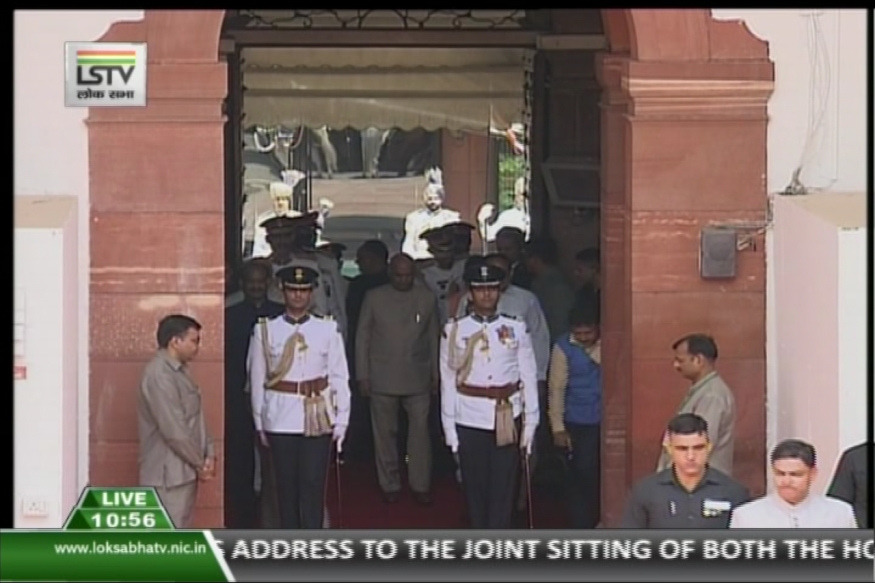 President Ram Nath Kovind has arrived at the Parliament. Upon his arrival, he was welcomed by Vice President Venkaiah Naidu and PM Narendra Modi

Here are visuals of the President Ram Nath Kovind's enroute to the Parliament. 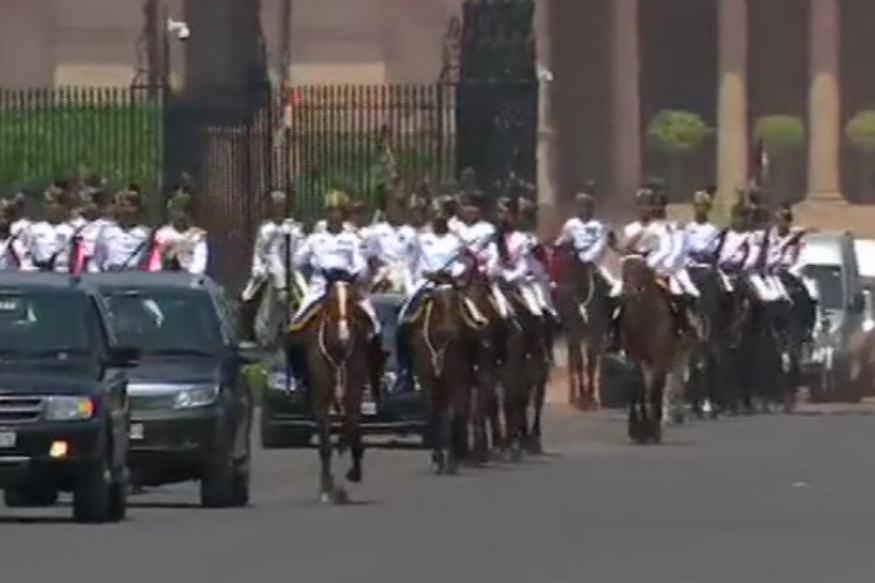 President Ram Nath Kovind has left for Parliament. He will be addressing a Joint Session of both the Houses soon.

Om Birla's comments about the religious slogans comes a day after Hyderabad MP-elect Adaduddin Owaisi, was heckled with chants of "Jai Shri Ram" and "Vande mataram" as he walked down the staircase for his oath-taking. The MP hit back with slogans of, "Jai Bheem, Jai Meem, Allahu Akbar, Jai Hind."​​

No Place for Sloganeering in Parliament Says Om Birla | Om Birla later affirmed that he will not allow a repeat of the shouting of religious slogans or heckling in the House, as witnessed during the swearing-in of some opposition MPs on Tuesday. “I don’t think Parliament is the place for sloganeering, for showing placards,” he said.​

The Wednesday session was important because the Parliament unanimously elected Om Birla as the Speaker for the 17th Lok Sabha. Om Birla, in his speech, said “I will preside over the proceedings in accordance with rules and regulations and safeguard the interests of the members, irrespective of the strength of their parties in the House. I have been a member like you from 2014 to 2019. Here, we should raise the issues which matter to the last person standing in the row."

Lok Sabha members who have not taken their Oath of Office, or the Affirmation of Allegiance to the Constitution, will do so today.The Secretary General will also lay on the Table, a statement showing the Bills passed by the both Houses of Parliament during the 248th Session of the Rajya Sabha, and assented to by the President.

On Wednesday, Om Birla of the BJP was elected as the Speaker of the 17th Lok Sabha. Birla was congratulated by Prime Minister Narendra Modi, other senior BJP leaders, and members of the opposition. “Congratulations to Shri @ombirlakota Ji on being unanimously elected the Speaker of the Lok Sabha. He has been associated with public life since his student days and has worked compassionately for the poor and downtrodden. My best wishes to him for the tenure ahead, ” the Prime Minister tweeted from his official account.

On Wednesday, the Lok Sabha elected Kota MP Om Birla as its Speaker, with many calling the surprise pick a message from the top leadership that the BJP will promote leaders who keep a low-profile and work at the ground-level.

Soon after taking over, Birla said he would not allow a repeat of the shouting of religious slogans or heckling in the House, as witnessed during the swearing-in of some opposition MPs on Tuesday.

“I don’t think Parliament is the place for sloganeering, for showing placards, or for coming to the well,” he was quoted as saying by Hindustan Times on Thursday. “There is a road for that where they can go and demonstrate. Whatever people want to say here, whatever allegations they have, however they want to attack the government they can, but they can’t come to the gallery and do all this.”