Parliament LIVE: Prime Minister Narendra Modi today replied to motion of thanks on president's speech in Lok Sabha. He is presently addressing the Lower House and laying out government's roadmap for next five. Addressing the House, the prime minister slammed Indira Gandhi government and said that Emergency crushed India's soul. He further pitched for unity and raised slogan of 'Jai Jawan, Jai Kisan and Jai Anusandhan'.

Parliament LIVE: Prime Minister Narendra Modi today replied to motion of thanks on president’s speech in Lok Sabha. He is presently addressing the Lower House and laying out government’s roadmap for next five. Addressing the House, the prime minister slammed Indira Gandhi government and said that Emergency crushed India’s soul. He further pitched for unity and raised slogan of ‘Jai Jawan, Jai Kisan and Jai Anusandhan’.

The DMK today raised the issue of Chennai water crisis in the Lok Sabha, accusing the AIADMK of complacency. DMK MP Dayanidhi Maran said, “The pre-monsoon rain is the lowest in the last 65 years. Water supply in the four reservoirs supplying water in Chennai has dropped below one per cent. We are going through a severe water crisis. A similar situation took place in 2004.”

He added, “Then Karunanidhi decided to set up a desalination unit and the UPA government sanctioned Rs 1,000 crore for a plant to be set up in Chennai. But Centre’s ally AIADMK is complacent.”

"What one of the main Congress ministers during Shah Bano case said in an interview recently was shocking, he said other Congress ministers remarked that it was not the job of the Congress to reform Muslims, 'if they want to lie in the gutter let them be' is what they said," Prime Minister Modi said in Lok Sabha.

Prime Minister Narendra Modi concluded his speech in Lok Sabha by saying, “There is no place for corruption in our nation. Our fight against corruption will continue.” He also urged people to build a "New India" together.

Taking a potshot at Congress, PM Modi said the party missed opportunities with Uniform Civil Code and Shah Bano case and it never worked for the Msulim women. He further said his government brought the bill for Women Empowerment and asked not to link it to religion.

Up to Judiciary to Decide on Jail, Bail: PM | Targeting Congress, Prime Minister Narendra Modi said, “Some members asked - why is Person A not in jail or Person B not in jail. I want to tell them- this is not the Emergency where Governments jailed people as they felt like. These decisions are taken by the Courts. Courts will decide on jail and bail."

Modi Talks About $5 Trillion Economy Dream | Let it be our collective endeavour to make India a $5 trillion economy. Promoting tourism and improving tourism infrastructure augurs well for economic prosperity. There is so much about India that the world wants to see: PM

Prime Minister Narendra Modi said, "Today, when we talk about water resources, I remember Dr Babasaheb Ambedkar. It was Babasaheb who worked diligently on waterways and irrigation." We have to work together for the farmer. We have to take the water scarcity seriously.I appeal to all MPs and NGOs to work towards water conservation, he added.

Sardar Sarovar Dam was the brainchild of Sardar Patel.

But, work on this Dam kept getting delayed.

As Chief Minister of Gujarat, I had to embark on a fast for this project.

After NDA took office, the pace of work increased significantly and it is benefiting many people: PM

We took office again a few weeks ago and I am happy to say we have taken numerous pro-people decisions. The decisions we have taken will benefit farmers, traders, youngsters and other sections of society. A lot of the major promises we made and we have begun fulfilling them: PM

The Honourable President spoke about 150th Jayanti of Bapu (Mahatma Gandhi), 75 years of India's freedom and these are landmark occasions in the history of India. During the freedom struggle, brave women and men died for the nation, This led to independence. Today, we have to live for the nation and build the India our freedom fighters dreamt of. I urge everyone to observe Gandhi 150 and 75 years of India’s freedom with great vigour.: PM

There are some people who feel only a few names contributed to national progress. They only want to hear those few names and ignore the others. We think differently, we feel each and every citizen has worked for India's progress: PM Modi 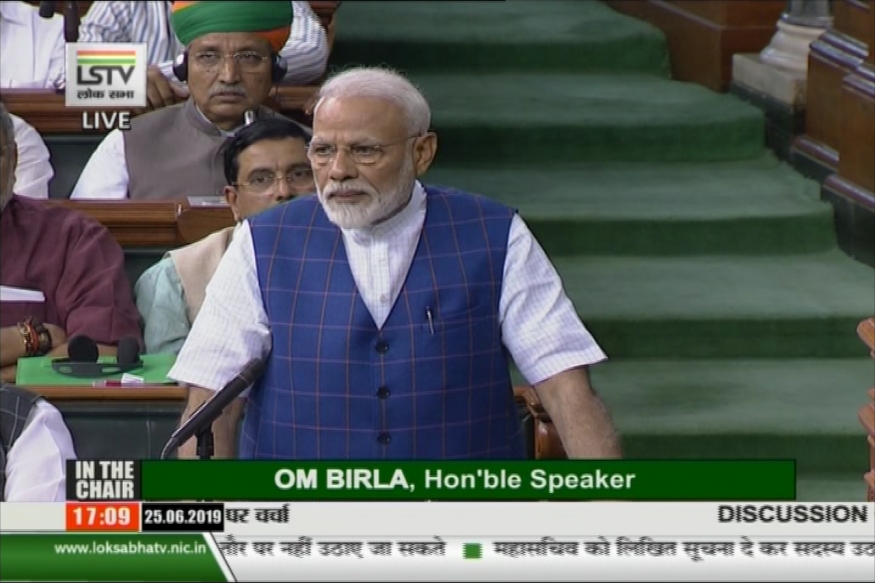 Talking about Emergency imposed in 1975, PM Modi said, "Today is 25th June. India was turned into a huge jail during the Emergency. Media was muzzled and national heroes were jailed. Who imposed the Emergency? Who trampled over the spirit of the Constitution, gagged the media and bullied the judiciary? We can't forget those dark days."

Congress did not recognise the work of others, including their party members. I challenge the government that was in power between 2004-2014 (Congress) to mention if they ever praised the work of Atal Bihari Vajpayee government. Did they ever speak about good work of Narasimha Rao Ji?  The same people did not even speak of Manmohan Singh Ji in Lok Sabha in this debate. On the other hand, we gave Bharat Ratna to Pranab Mukherjee: PM Modi

Cong Disconnected from Reality: PM | We don’t waste time in pulling others down. We believe in raising our standards of work. Congress rose so high that it has been disconnected from reality but we dream of sticking to the roots. Congress didn't recognise the work of others: PM Modi

My Govt is Dedicated for Poor: PM | In 2014, I said my government will be dedicated to the poor. We developed such a culture in the country that a common man had to fight and compromise with basic needs. We did not divert from our development path, we did not dilute our development agenda. We worked for those who had nothing: PM Modi

Nothing is Bigger Than Winning People's Trust: PM | Prime Minister Narendra Modi said, “I do not think about elections in terms of who won and who lost. For me, what is satisfying is the opportunity to serve 130 crore Indians and do work that has made a positive difference in the lives of our citizens. Nothing is bigger than winning the trust of people.”

Image of Prime Miniter Narendra Modi addressing in Lok Sabha and replying to "Motion of Thanks on Presidents' Speech'. 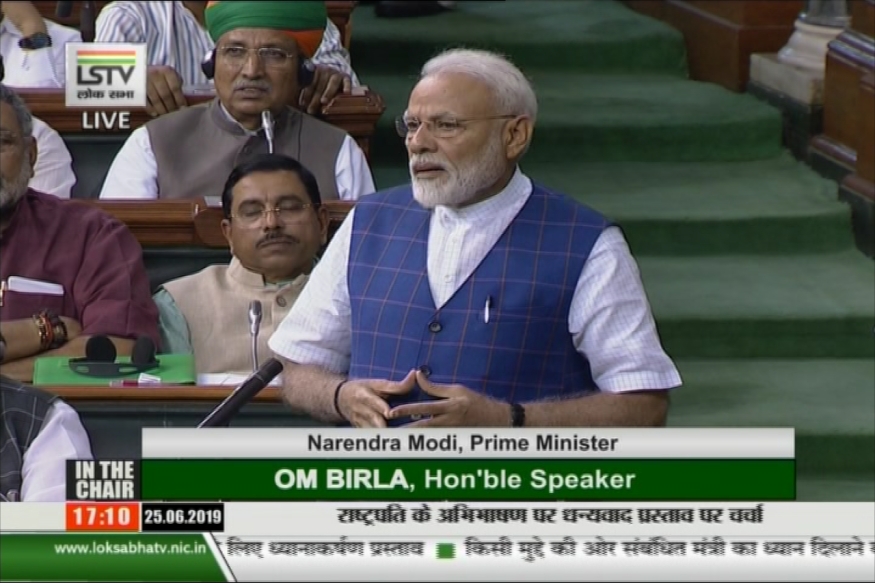 India should not lose the opportunity to move forward together to fulfill the dream of a strong, prosperous, inclusive nation, PM Modi said in Lok Sabha.

Prime Minister Narendra Modi said, I am here to reply to the Motion of Thanks on Presidents’ Speech. Presidents’ speech represents the aspirations of the people of the country."

Prime Minister Narendra Modi is speaking in Lok Sabha and replying to the 'Motion of Thanks on Presidents' Address'.

Replying to 'Motion Of Thanks On the President's Address' in Lok Sabha https://t.co/oXpl0TMDOg

LJP leader Chirag Paswan said in the Lok Sabha that he was pained by the death of children in Bihar's Muzaffarpur district due to Acute Encephalitis Syndrome (AES) and hoped such incidents would not reoccur. More than 100 children have died in Bihar's Muzaffarpur district due to suspected Acute Encephalitis Syndrome. "I extend my sympathies. The death number gives extreme pain but I believe that nature punishes us when we make any mistake," Paswan said without elaborating.

Prime Minister Narendra Modi will reply to the ‘Motion of Thanks on the President’s address' at 5pm in the Lok Sabha.

Shri @narendramodi will reply to the 'Motion Of Thanks On the President's Address' at around 5 PM in the Lok Sabha this evening.

YSRCP MP Magunta Magunta Sreenivasulu is urging the Centre to help the debt-strapped Andhra Pradesh. "There is a negative cash balance so the government has to help the young CM," he says.

'AIADMK Complacent' Says DMK MP on Water Crisis | Calling attention to the water crisis in Tamil Nadu, DMK MP Dayanidhi Maran calls the state government "complacent" in the problems. "The pre-monsoon rain is the lowest in the last 65 years. Water supply in the four reservoirs supplying water in Chennai has dropped below 1 %."

Soon after taking oath in the Parliament, TMC lawmaker Nusrat Jahan says, "There are several things on priority. We will raise the first concern of our constituencies before the House tomorrow. We will put across our views there."

Here is an image of Mimi Chakrabarti taking oath in the Parliament.

Rajya Sabha Adjourned Till 2 PM | Rajya Sabha has been adjourned till 2 pm after the MPs observed two minutes of silence for BJP leader Madan Lal Saini following his demise.

Trinamool Congress MPs Nusrat Jahan and Mimi Chakraborty have taken oath as Members of Parliament in the Lok Sabha. Both Nusrat and Mimi had been unable to take oath as the MPs were in Turkey for the former's wedding.

Meanwhile, TMC MPs Nusrat Jahan and Mimi Chakraborty took oath today. Actor-turned-politician Jahan and Chakraborty took the political plunge this year and won from Basirhat and Jadavpur constituencies respectively. The two were unable to take oath earlier as they were busy with the wedding festivities of Jahan, who tied the knot with Kolkata-based businessman Nikhil Jain in Turkey.

In the evening, Prime Minister Narendra Modi will address the Parliament in a speech that is likely to be a glimpse into the next five years of the new government. Modi’s note of thanks and reply is also likely to address several issues that were raised by President Ram Nath Kovind in his joint address to the Rajya Sabha and the Lok Sabha last week.

Kovind, in his address on June 20, had touched on several issues, including the water crisis, the National Register of Citizens and the ‘One Nation, One Poll’ proposal. The President said his government has decided to implement the process of National Register Citizens on priority basis, even as he hailed the efforts of the government to tackle water scarcity and called the Jal Shakti Ministry a step towards water conservation.