Parliament LIVE: Sparks are expected to fly in Parliament today after Opposition parties decided to boycott the joint sitting called to commemorate Constitution Day and instead hold a protest against the political developments in Maharashtra, which saw the BJP return to power in a midnight coup aided by NCP supremo Sharad Pawar’s nephew Ajit. The Congress, Left parties, NCP, TMC, RJD, TDP and DMK have planned a joint protest at the Ambedkar statue inside the Parliament complex. In a rare move, the Shiv Sena — erstwhile ally of the BJP — too said they would not attend the joint sitting.

Opposition parties will hold a joint meeting in the morning and take a final call on the boycott of the 'Constitution Day' function. This is aimed at presenting a united opposition in the wake of the Maharashtra logjam, sources said.

Congress leader KC Venugopal says there will be a NCP-Sena-Congress meeting in the evening where a joint legislative party leader will be decided.

KC Venugopal,Congress: Today evening there will be joint press conference of the three(Shiv Sena-Congress-NCP) parties and a meeting. In the meeting leader of joint legislative party will be elected, I think Uddhav ji will be elected https://t.co/HpBP9UmfHR

Former UP CM Akhilesh Yadav said, "Today, on Constitution Day, those who follow the Constitution have won and the losers have been defeated. Taking moral responsibility for the misuse of special constitutional power, everyone whose 'morning mistake' has embarrassed the country in front of the whole world, should also resign."

Slap on Faces of Masters in Delhi: KC Venugopal | "This is a victory of constitutional democracy. They thought through horse trading they can make Govt. This is not only a failure of Devendra Fadnavis but also a slap on faces of their masters sitting in Delhi," Venugopal said.

Devendra Fadnavis reaches Raj Bhavan to submit his resignation to the governor.

Shiv Sena leader Priyanka Chaturvedi takes a poetic dig at BJP after Devendra Fadnavis announced his resignation as the CM of Maharashtra.

Congress Spokesperson Randeep Surjewala demands an apology from Devendra Fadnavis and Ajit Pawar. "It is now clear that Chanakyanity in BJP means abduction of democracy. Shri Devendra Fadnavis and Shri Ajit Pawar should apologize to the people of Maharashtra. His government was based on lies and defection which plunged into cards," he said.

Congress spokesperson Jaiveer Shergill says after Devendra Fdanavis' resignation as CM, the Governor of Maharashtra must resign now for violating his duties.

When SC ordered immediate floor test & closed #BJP window of horse trading then Fadnavis resigned; Moral of Story - “A Lie has no Legs” ; Next -Governor must resign for betraying his duty & acting as “Doorman” of Illegal & Immoral Govt rather than “Guardian” of Constitution

Congress Press Conference at 4:15pm | Following the resignation of Devendra Fadnavis as CM and Ajit Pawar as Deputy CM, the Congress will hold a press conference at 4:15 pm.

The Congress will not protest in Parliament over Maharashtra government formation as the Supreme Court's order to hold a floor test in the state assembly on Wednesday has settled the issue for now, party sources were quoted as saying by news agency PTI. The sources also said the House Speaker will decide what action is to be taken on the complaint by two women Congress MPs who said that they were "manhandled" by marshals in the Lok Sabha when they were protesting in the Well of the House over Maharashtra government formation.

On the seventh day of the winter session of Parliament, several bills are scheduled to be tabled in the Lok Sabha and Rajya Sabha today:

Speaking about the Opposition boycott of the joint session of Parliament, former PM Manmohan Singh says that the demonstrations serve as a reminder to people that constitutional norms are being violated by the present establishment.

Former Prime Minister & Congress leader Dr. Manmohan Singh on Opposition boycotting joint session of Parliament on #ConstitutionDay: It is not a disservice to the Constitution. It's reminder to everyone that the constitutional norms are being violated by the present establishment pic.twitter.com/9yH8r0p7Jt

President ram Nath Kovind says, "It was in 2015, the 125th birth anniversary year of Dr Bhimrao Ambedkar that the Govt of India decided to celebrate Nov 26, as 'Constitution Day' every year. This is a commendable initiative to reiterate our gratitude to the chief architect of our Constitution. The 'Constitution of India' lies at the foundation of the world's largest democracy. This is the supreme law in the country’s democratic framework and it continuously guides us in our endeavors."

Congress MP Hussain Dalwai has given Suspension of Business Notice in Rajya Sabha under rule 267 over 'Government formation in Maharashtra by unconstitutional means'.

The Congress on Constitution Day said it resolved to save the soul of the Constitution by not allowing it to be mortgaged to an "autocratic government blinded by the insatiable lust for power". 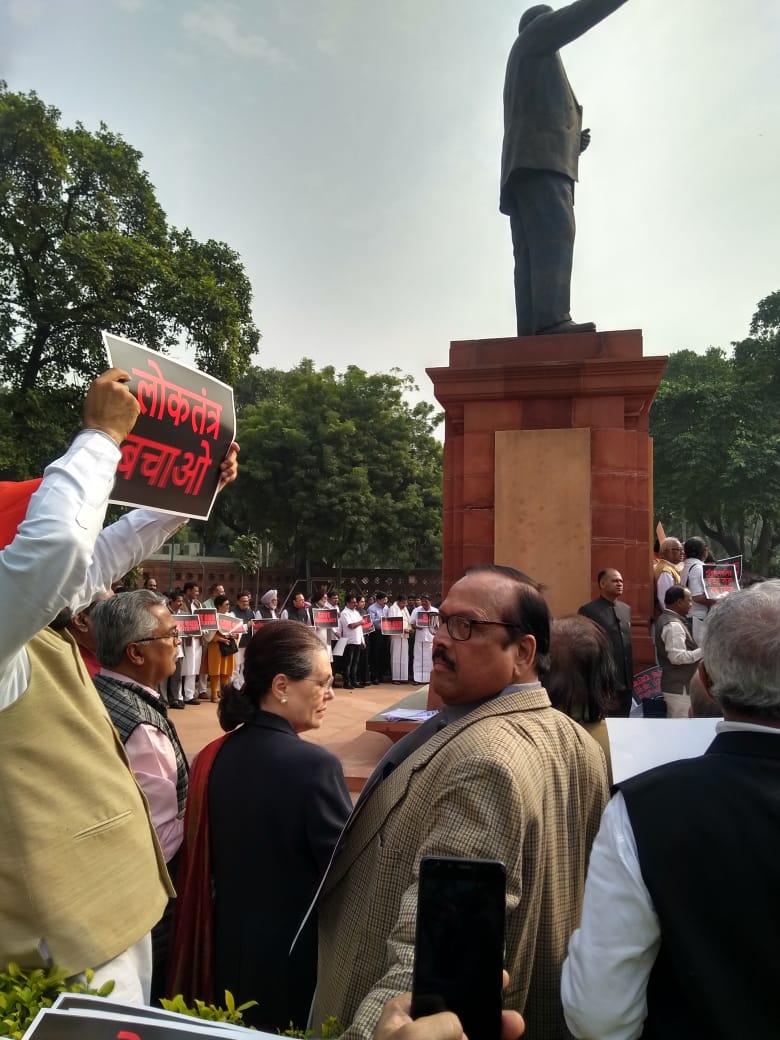 Prime Minister Narendra Modi says India has strengthened and empowered its democracy in the last 70 years. Addressing members of both Houses of Parliament in the Central Hall of Parliament House, he also said that while November 26 is a happy occasion as India celebrates Constitution Day, it also reminds of the Mumbai terror attacks that took place on this day in 2008. "I pay tributes to those killed in the Mumbai terror attacks," he said.

The opposition parties are protesting outside Parliament against what they call "murder of democracy". 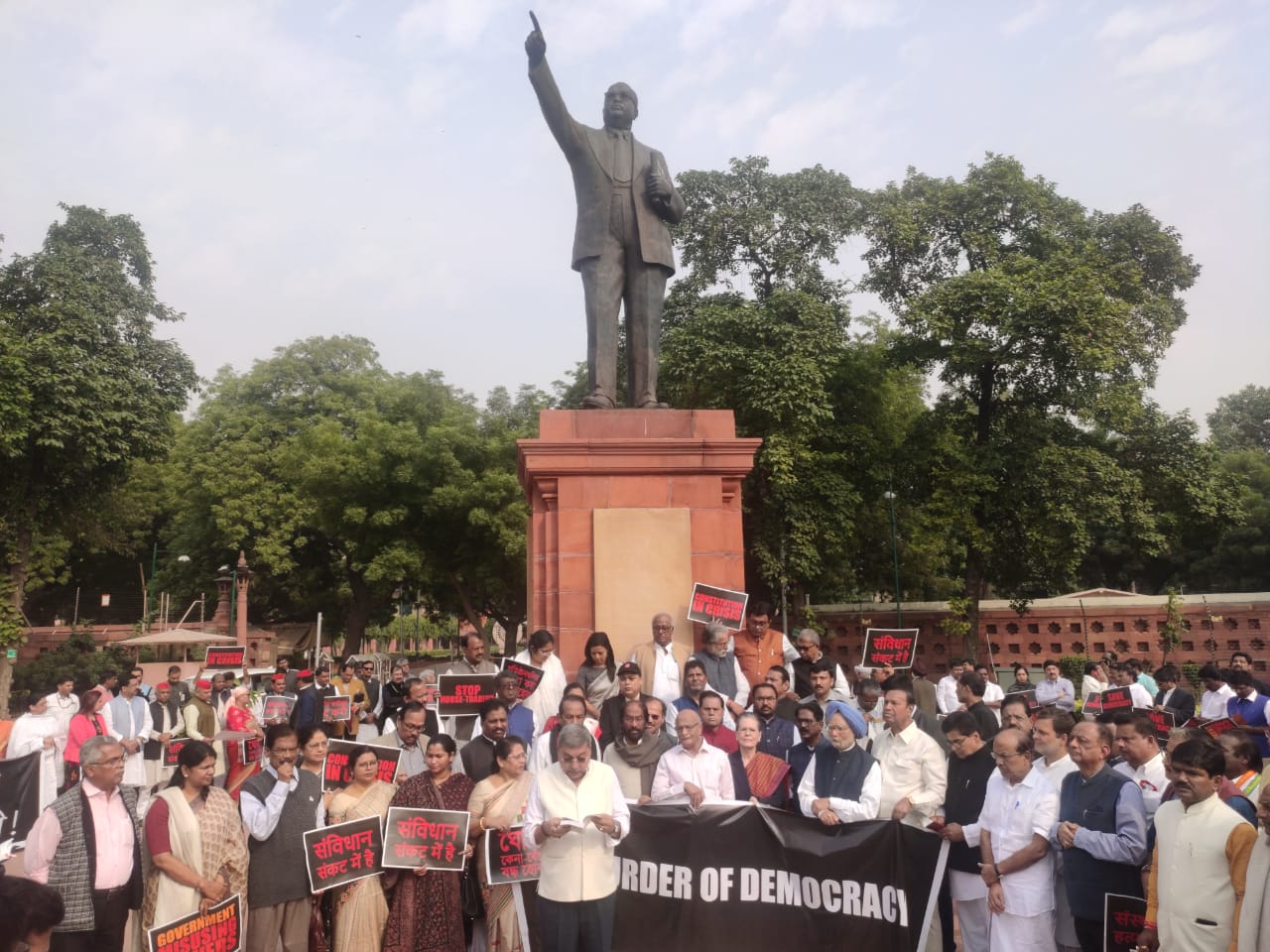 Fresh visuals from outside Parliament building where Sonia Gandhi is reading a copy of the Indian Constitution in front of Ambedkar's statue where the Opposition leaders are gathered to hold an agitation against the government.

#WATCH #ConstitutionDay: Congress interim President Sonia Gandhi reads a copy of Indian Constitution in front of the Ambedkar Statue in the Parliament. Leaders of Opposition parties are protesting in Parliament premises today, opposing govt formation in Maharashtra by BJP. pic.twitter.com/5QQiN7TMvh

"India has strengthened and empowered its democracy in the last 70 years," says PM Modi at the Central Hall of Parliament on Constitution Day, as he goes on to pay his tributes to India's first Law Minister Bhim Rao Ambedkar, who played a pivotal role in the drafting of the Indian Constitution.

With the joint session underway, Opposition leaders including Sonia Gandhi, former PM & Congress leader Manmohan Singh and Shiv Sena's Arvind Sawant, hold a protest in front of the Ambedkar Statue in Parliament against what they call "the murder of democracy" in Maharashtra.

Prime Minister Narendra Modi begins his address to Parliament on Constitution Day by remembering the victims of the 2008 Mumbai terror attack. In one of the deadliest terror attacks in India's history, 166 people were killed and over 300 injured when 10 heavily-armed terrorists from Pakistan created mayhem in Mumbai on November 26, 2008.

The Joint Session of Parliament called on the occasion of 'Constitution Day' commences.

"We are confident that we will win the Floor Test," says Congress president Sonia Gandhi after the Supreme Court orders Floor Test in the Maharashtra assembly to be held tomorrow before 5 pm. The proceedings shall be live telecast.

Opposition Confirms Boycott of Joint Sesssion | The Opposition, after holding talks today, has decided to boycott the 'Constitution Day' joint session in parliament. K Suresh of the Congress, while announcing the decision says that it has been made because the government is bypassing the Constitution. "In the latest situation in Maharashtra, they are disrespecting Indian Constitution," he adds.

Opoosition Meet Underway | Opposition parties are currently holding a joint meeting to take a final call on the boycott of the 'Constitution Day' function. This is aimed at presenting a united opposition in the wake of Maharashtra developments. The government is celebrating 'Constitution Day' or 'Samvidhan Diwas'  in the Central Hall of Parliament to mark the 70th anniversary of adoption of the Constitution by the Constituent Assembly. President Ram Nath Kovind, Vice President M Venkaiah Naidu, Lok Sabha Speaker Om Birla and Prime Minister Narendra Modi will address the MPs on the occasion.

Maha Matter in SC Today | In a crucial hearing, the Supreme Court today will decide on a petition challenging the surprise government formation by the BJP in Maharashtra. The top court on Monday, after an 80-minute hearing, said it would give a decision today on the petition filed by the newly formed Congress, Shiv Sena and Nationalist Congress Party combine, which claimed it has the numbers needed to form government. On Monday, the centre argued that Governor Bhagat Singh Koshyari invited Devendra Fadnavis to form government based on a letter showing the support of 170 MLAs, including all 54 of the NCP of Ajit Pawar, who was sworn in as Deputy Chief Minister.

The government is celebrating 'Constitution Day' or 'Samvidhan Diwas' on Tuesday in the Central Hall of Parliament to mark the 70th anniversary of adoption of the Constitution by the Constituent Assembly. President Ram Nath Kovind, Vice President M Venkaiah Naidu, Lok Sabha Speaker Om Birla and Prime Minister Narendra Modi will address the MPs on the occasion. The President will also inaugurate a digital exhibition through video conferencing