Punjab Election Results 2022 Updates: In his victory speech, Punjab Chief Minister-elect Bhagwant Mann has promised to fix unemployment in the state as his first task in office.

Punjab Election Results 2022 Updates: Calling the AAP’s performance in Punjab as a “revolution”, party national convener and Delhi Chief Minister Arvind Kejriwal on Thursday said that with their huge mandate, the people have said that Kejriwal is not a terrorist. First, this revolution happened in Delhi, then in Punjab and it will now happen all over the country, he said as trends showed that the AAP was set to form Read More

Prime Minister Narendra Modi congratulated the AAP for its victory in the Punjab elections and assured all possible support from the Centre for Punjab’s welfare.

I would like to congratulate AAP for their victory in the Punjab elections. I assure all possible support from the Centre for Punjab’s welfare. @AamAadmiParty

They were candidates whom not many took seriously or took the pains to go meet. But these six Aam Aadmi Party (AAP) candidates have turned out to be giant slayers in Punjab, sending home the big wheels of Punjab politics, including four former chief ministers. At News18, however, we made it a point to meet some of them during the poll campaign. Let’s begin with mobile phone repair shop owner Labh Singh Ugoke, who was the AAP nominee from Bhadaur, which CM Charanjit Singh Channi chose as one of the two places to contest from. Read More

Every BJP Worker Will Keep Defeating Feeling of Separatism in Punjab in Next 5 Yrs: PM Modi

“In the next five years, every BJP worker in Punjab will keep strengthening the party and keep defeating the feeling of separatism in the state,” said Prime Minister Narendra Modi while addressing BJP workers at party headquarters in Delhi.

Former Congress leader Ashwani Kumar, who quit the party ahead of the Punjab Assembly polls, has said the state election results signal the “endgame” for the grand old party and the emergence of an alternative political narrative in the country. He said the Aam Aadmi Party (AAP) and the Trinamool Congress (TMC) are the principal engines of this alternative political narrative and hoped that this is the beginning of a new and refreshing politics that is responsive to the sensitivities of the people.

Bhagwant Mann Has Starred In These Films And TV Shows

Comedian-turned-politician Bhagwant Mann has come a long way. He has gone from entertaining people on screen to taking the oath as the Chief Minister of Punjab at Khatkarkalan in Nawanshahr district. The election results were announced on Thursday, March 10, along with Assembly Election results of Uttar Pradesh, Uttarakhand, Manipur and Goa. Bhagwant contested in the state from Aam Aadmi Party. While the oath date is yet to be revealed, AAP has already begun celebrations for they’ve registered their second-largest victory after Arvind Kejriwal’s in Delhi. Punjab Chief Minister-elect Bhagwant Mann has won from Dhuri by over 45,000 votes. Read More

The Aam Aadmi Party (AAP) is all set to form a government in Punjab as the party has won 92 of the 117 assembly seats, according to the latest ECI poll trends. 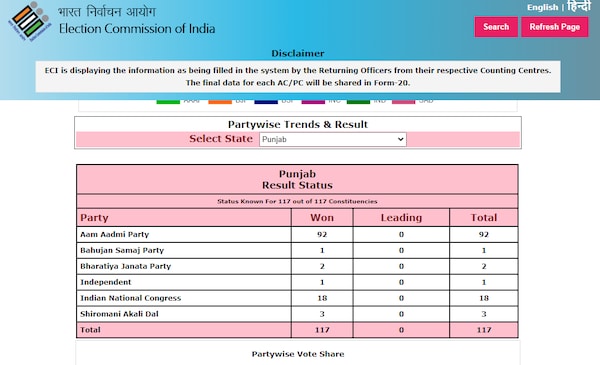 Now It's My Turn To Fulfil The Responsibility: Bhagwant Mann

After the historic victory of the AAP in Punjab, CM candidate Bhagwant Mann along with his mother Harpal Kaur and sister Manpreet Kaur addressed the people outside his house in Sangrur. Just after the early trends in the election results, thousands of people started gathering outside Mann’s house to celebrate the victory.

Addressing the people, Mann thanked all the Punjabis and said, “You have fulfilled your responsibility very well, now it is my turn to fulfil the responsibility.”

“We have good intentions, that is why the people of Punjab have trusted us. Trust me, change will be visible in a month. Now you will not have to go to the offices of government employees. Government officers won’t hinder your work by making excuses. Now the public servants will come to your houses and localities to do their job,” he stated. 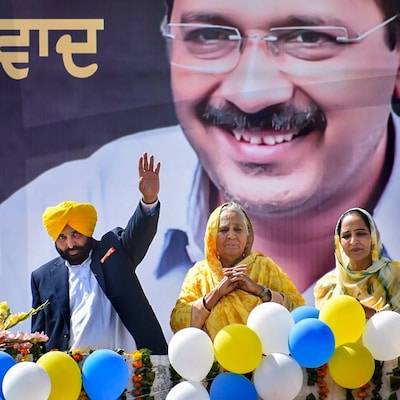 Congratulations to Arvind Kejriwal and Bhagwant Mann for thumping victory in Punjab. It’s a vote against mafia. I am sure Punjab will progress in the rule of Aam Aadmi Party:  H S Phoolka

When Punjab CM-Elect Bhagwant Mann Said 'If I Can't Study, I'll Be a Politician' | Watch Video

“If I could not study well, I would become a politician,” said Bhagwant Mann, as part of one of his acts as a comedian not less than a decade ago. Little did he know back then that this was the prophecy for him. Not did Bhagwant Mann, the chief minister-elect for Punjab is a college-drop but he also served as an MLA from Sangrur. Read More

I congratulate Sh @ArvindKejriwal and Sh @BhagwantMann for the massive mandate secured by @AAPPunjab. Hope this clear verdict is used to secure interests of Punjab.

I’m grateful to People of Abohar for standing by Sandeep Jakhar even as winds of change swept across the state.

The Congress office in central Delhi bore a deserted look as the counting trends kept throwing up dismal numbers on Thursday for the party across all five states where it fought the polls, including Punjab where it is ceding control to the Aam Aadmi Party. For most of the day, there were few Congress leaders in sight to offer a possible explanation of what went wrong. There were just a handful of media crews present, spread across the sprawling green ground of the party office. More journalists started pouring in as the day progressed. Read More

According to the official trends by the Election Commission, AAP has won 85 seats and leading on 7, Congress won 15 & leading on 3, Shiromani Akali Dal leading on 3, BJP on 2 and BSP and Independent win 1 each.

Swaraj India president and former AAP leader Yogendra Yadav has termed the Arvind Kejriwal-led party’s performance in Punjab as “spectacular and extraordinary”, but said it’s more “an indictment” of the “entire political establishment” rather than the success of a party in the electoral battle. Speaking to PTI, he said people of the state have given their mandate to the AAP as it managed to present itself as the “only visible political alternative”.

Much was at stake for Shiromani Akali Dal (SAD) leader and its chief ministerial face Sukhbir Singh Badal in these elections, for it was meant to be a generational shift in the party with the senior Badal hoping to see his son in the leadership and eventual CM role. But the Aam Aadmi Party (AAP) sweep decimated Badal’s hope and left Sukhbir with a lot of ground to recover. Read More

Heartiest congratulations to @BJP4India for winning assembly elections in Uttar Pradesh, Uttrakhand, Goa and Manipur. I'm sure that the party will continue to work for the holistic development & prosperity of these states and it’s people. @narendramodi @AmitShah @JPNadda

Sidhu Trailing Behind Jeevan Jyot Kaur by a Margin of 5,000 Votes

Bhagwant Mann Wins from Dhuri by a Margin of 45,000 Votes

Channi Calls Meeting of the State Cabinet Tomorrow at 11:30 am

Who All Are Trailing in Punjab Election Result?

Bhagwant Mann to be Next Punjab CM as AAP Sweeps State

Punjab Results: Who is Leading from Bathinda Urban? Check Details

AAP Tsunami in Malwa? Congress Trails in All 43 Seats

Sri Hargobindpur Election Result: All You Need to Know About the Candidates and Who's Leading

Congress Leads on 4 Seats, AAP on 3 in Early Trend

Parties Including Congress, AAP Claims Victory Ahead of Results

Punjab Elections: Who Are the Candidates?

Punjab Gears Up for Counting of Votes Today

government in the state, taking the lead in 91 of the 117 assembly seats.

While addressing AAP leaders and workers at the party headquarters in the national capital, he asked them to practice politics of love and said the coming days belong to India. He congratulated the voters of Punjab for leading the AAP to a “glorious victory” in the assembly polls and said they made political stalwarts bite the dust.

In his victory speech, Punjab Chief Minister-elect Bhagwant Mann has promised to fix unemployment in the state as his first task in office. In an outreach to Dalit voters, Bhagwant Mann said no government office in the state will have the photo of the Punjab CM, but will carry a portrait of Dalit icon DR Ambedkar. The ruling Congress has been relegated to second position in the state, losing power.

Exit polls 2022 had predicted a landslide win for AAP Chief Minister candidate Bhagwant Mann in Assembly Election Results 2022. Majority of the Punjab exit polls results had been unanimous in predicting a clean sweep for the Arvind Kejriwal-led Aam Aadmi Party with 75-90 seats in the 117-seat Punjab Assembly, where the halfway mark is 59. A handful had projected a hung Assembly in Punjab, the lone poll-bound state where the Congress was in power, with an edge for the AAP. With the Punjab Election Results handing a thumping victory to the AAP, the party has taken a giant step on road to becoming a national party. The Punjab Election 2022 percentage share of parties will be interesting to watch now.

Assembly Election Results 2022 in Punjab, Uttar Pradesh, Goa, Uttarakhand, and Manipur are being as the half-time preview of Lok Sabha elections 2024. With the duo of Arvind Kejriwal and Bhagwant Mann winning the Punjab Vidhan Sabha chunav, this is the AAP’s second major government formation after Delhi. Mann would have to resign as Member of Parliament from Sagrur Lok Sabha seat. The party had also contested extensively in Goa elections 2022, and also fought on seats in Uttarakhand polls and Uttar Pradesh elections, but was always seen as having the real shot in Punjab.

The Aam Aadmi Party has promised the Delhi model of development in elections in Punjab with heavy emphasis on health, education, water, electricity and outreach towards women with a monthly allowance for all above the age of 18. The party has also promised to create employment and provide an unemployment allowance for youth.

The Congress, meanwhile, is at yet another crossroads in Punjab. After a bitter build-up to Punjab polls with Amarinder Singh’s exit, Rahul Gandhi announced Charanjit Singh Channi as the Punjab CM candidate in a snub to state unit chief Navjot Singh Sidhu. With the drubbing, Rahul Gandhi now has to justify that choice and the loss to the party, particularly to the Group of 23 rebels who had spoken out against his style of leadership. The party has already turned down Navjot Singh Sidhu’s resignation as Punjab Congress chief.

Apart from the farmers’ protest against now-repealed agri-marketing laws, major election issues in Punjab were sacrilege and drugs smuggling. The BJP made the unprecedented breach of Prime Minister Narendra Modi’s security part of its campaign pitch on security in the border state.

Punjab Election 2022 seats have painted a completely different picture from the last Punjab election in which the Congress had won an absolute majority by winning 77 seats in the Punjab Vidhan Sabha, ousting the SAD-BJP government after 10 years. The AAP had emerged as the second-largest party, winning 20 seats. The Shiromani Akali Dal won 15 seats, while the BJP, which had a coalition government with the Akali Dal in Punjab from 2007 to 2017, secured three seats.