From helping food delivery boys to addressing mob lynching, Ajaz has raised his voice for several issues through his NGO.

Khan has filed his nomination from Byculla as an independent candidate and will be up against lawyer and sitting AIMIM MLA Waris Pathan and Arun Gawli’s daughter, Geeta Gawli of the Shiv Sena. 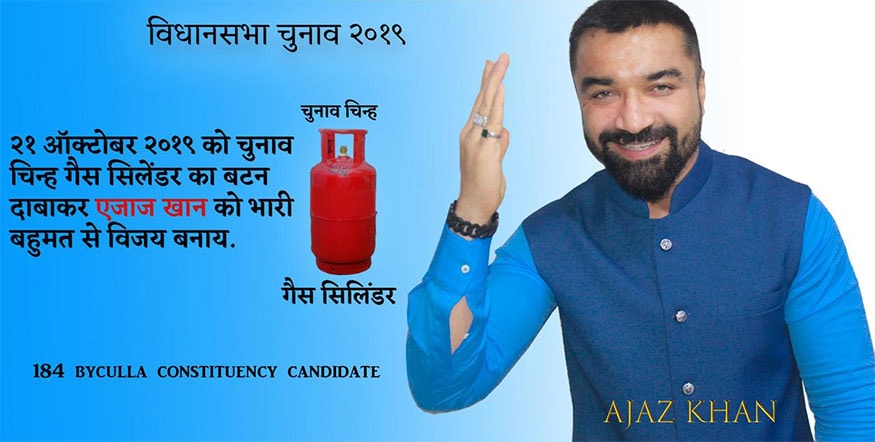 He has been allotted 'gas cylinder' as the symbol. Ajaz, who has been embroiled in several controversies, has lent his support to various social causes.

From helping food delivery boys to addressing mob lynching, Ajaz has raised his voice for several issues through his NGO. Ajaz also boasts a huge fan following on social media and he regularly urges his fans to take a stand on issues.

Speaking exclusively to CNN-News18, Ajaz Khan said; ‘I am confident of giving a tough fight to my competitors who’ve failed miserably in developing Byculla. Residents and workers here face severe problems as this place still lacks basic facilities. Buildings and roads are in bad situations and I am ashamed that despite several incidents there are no safeguard measures taken. However, my priority is to give my people the best standard of living.”

“Enough of politics on religion. I am here to end Hindu vs Muslim politics as it’s the time to raise politics beyond this. Reports of lynching have made Muslims’ lives miserable and all are living under the fear of getting attacked anytime. Being a responsible leader one needs to make all feel secured in India,” Ajaz said over the phone.

He further said, “It is difficult to fight an election and involves huge muscle and monetary benefit. I am here to give my best and I am sure that the people of Byculla will reward me for my efforts.”