Sena Vs Sena Dussehra in Mumbai, But Who Will Claim Bal Thackeray's Legacy? As Uddhav, Shinde 'Roar', News18's Lowdown on Upcoming Rallies

The Uddhav and Shinde Shiv Sena factions have released videos ahead of the rallies. (Image: Twitter)

Eknath Shinde's rebellion in June brought down Uddhav Thackeray's MVA government, and a mega-showdown with two Dussehra rallies is all set for tomorrow

A police official said on Monday that strict security measures are in place across Mumbai in preparation for two Dussehra rallies organised by Shiv Sena factions led by Maharashtra Chief Minister Eknath Shinde and party president Uddhav Thackeray. Shinde’s rebellion in June brought down Thackeray’s Maha Vikas Aghadi (MVA) government, and the two factions have had an acrimonious relationship since, with workers clashing on the streets at times.

While Thackeray will speak at the Sena’s traditional venue Shivaji Park in central Mumbai on October 5, Shinde’s faction has organised their Dussehra event at the MMRDA ground in Bandra Kurla Complex (BKC), which is close to ‘Matoshree,’ the former chief minister’s private residence.

As the ‘showdown’ comes close, News18 gives a lowdown on the two competing rallies:

Ahead of their Dussehra rallies, the Shiv Sena’s two factions have been engaging in a “video war," with both sides claiming to be the true heirs of Sena founder Bal Thackeray’s legacy. A video released by the Uddhav faction on September 30 said, “One leader, one flag, one field…Witness Shiv Sena’s Traditional Historic Dussehra Gathering!"

The factions continue to release videos against each other ahead of the rallies.

‘Thousands Expected from Across States’

“Thousands of people are expected from across the state for both rallies and, therefore, arrangements have been made to ensure law and order and deal with any untoward incident. Local police as well as additional cover by other units will be in place," an official said.

Mumbai Joint Commissioner of Police Vishwas Nangre Patil said his team visited Shivaji Park and BKC to take stock of security arrangements at the venues. Stringent security measures are in place as there is a possibility of supporters of the two rival factions coming face to face in the metropolis, which may lead to law and order issues, police said.

Meanwhile, Maharashtra Deputy CM Devendra Fadnavis said workers of both rallies would understand the importance of maintaining law and order.

Law & order situation will be maintained (during Dussehra rallies). Workers going to both rallies (of Shiv Sena factions at Shivaji Park & MMRDA Grounds) will understand that. We've to keep an eye out that no wrong element enters the crowd: Maharashtra Dy CM Devendra Fadnavis pic.twitter.com/9Y4YiWLuFq— ANI (@ANI) October 3, 2022

Incidentally, the security of Shinde was increased recently due to a threat input, police added. The chief minister visited the MMRDA ground at BKC in suburban Mumbai and took stock of the preparations for the October 5 event. I have visited the venue (in BKC) and the preparations are in full swing. Lakhs of people from across the state will come to the rally and all departments are working to ensure they don’t face any problem. Our preparations will get over tomorrow (Tuesday) and this rally will be a success," Shinde said.

Maharashtra | I don't pay attention to it. Our home dept & home minister Devendra Fadanavis are capabale & we trust them. I won't be scared of such threats, nobody can stop me from working for the public. I will continue to work for them: CM Eknath Shinde on death threats to him pic.twitter.com/HcONGfDqgv— ANI (@ANI) October 2, 2022

Sheetal Mhatre, a spokesperson for the Shinde camp, said the preparations at the ground are almost 80 per cent over and 4,000-5,000 buses have been booked by MLAs and MPs to ferry their supporters to the rally site. At the Shivaji Park too, the Uddhav Thackeray camp is making its own preparations for the rally — building the stage and making seating arrangements for Shiv Sainiks loyal to the Sena president.

The top leadership of the Uddhav Thackeray faction also met at Shiv Sena Bhavan, the party headquarters in Dadar, to take stock of the on-going preparations.

Meanwhile, the NCP has put up posters outside Matoshree supporting Thackeray’s Dussehra rally. 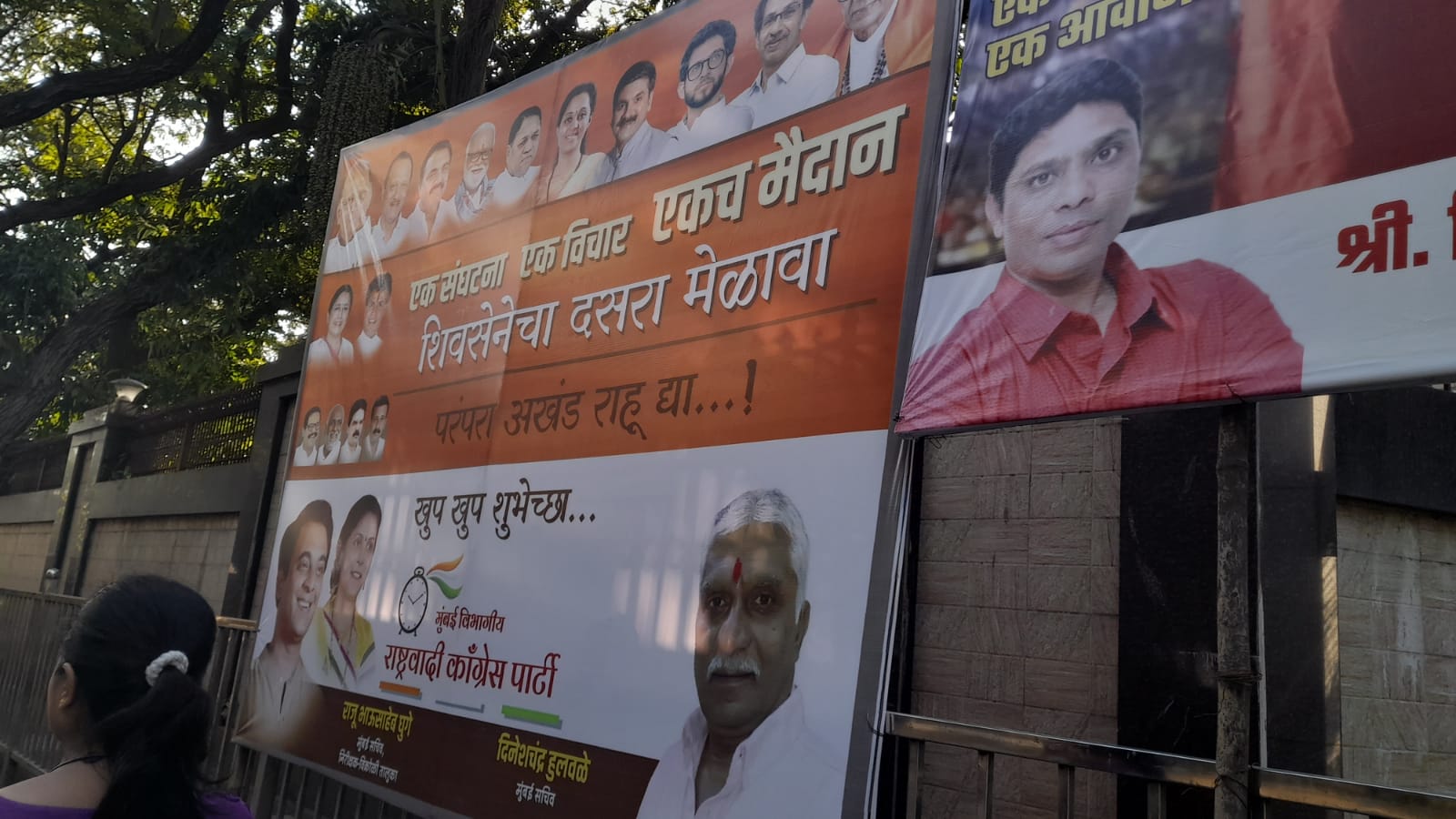 Mumbai traffic police on Monday said it had made necessary arrangements for the parking of scores of buses that will bring workers of the Uddhav Thackeray and Eknath Shinde factions of the Shiv Sena for their respective Dussehra rallies at Shivaji Park and Bandra Kurla Complex on October. Buses carrying supporters from western and north Mumbai will be parked along Senapati Bapat Marg and Kamgar Maidan, while those arriving from Navi Mumbai and Thane will be parked at Five Gardens, Nathalal Parekh Marg, Edanwala Road, an official said.

After rebelling against Shiv Sena leadership, the faction led by Maharashtra Chief Minister Eknath Shinde will face its first popularity test in the November 3 bypoll to the Andheri (East) Assembly segment in Mumbai, which was represented by Shiv Sena MLA the late Ramesh Latke. The upcoming contest has generated intense interest as both the factions of Shiv Sena are vying for the “Bow and Arrow" symbol of Shiv Sena. The Election Commission is currently hearing the pleas to decide the ‘real’ Shiv Sena and the allotment of the poll symbol. The Election Commission on Monday announced the schedule for the bypoll. The counting of votes will take place on November 6.

The Andheri (East) seat fell vacant after the death of Latke, who had won the seat two times in a row, in May this year. The ruling Bharatiya Janata Party (BJP) and the Shinde faction have fielded Murji Patel, a former corporator of the Mumbai civic body, in the byelection. The Shiv Sena led by Uddhav Thackeray is likely to field late Latke’s wife Rutuja Latke.