Spooked by Fates of Vijay Mallya and Siddaramaiah, CM Kumaraswamy to Give Tipu Jayanti a Miss

According to insiders, the Gowdas feel that honouring the Sultan of Mysore would bring them bad luck.

Bengaluru: The controversy over Tipu Jayanti may put an abrupt end to joint celebrations by JD(S)-Congress over recent bypoll victories.

The HD Kumaraswamy government has reluctantly agreed to celebrate Tipu Jayanti on Saturday, which is being opposed by the BJP and the people in Kodagu district.

The invitation card for the official event at the state Assembly building and secretariat Vidhana Soudha does not have the name of Chief Minister Kumaraswamy. Deputy chief minister Dr. G Parameshwara, who is from the Congress, will grace the occasion in his place.

The JD(S) has always stayed away from Tipu Jayanti celebrations when it was in the opposition and does not seem to be keen on celebrating it now.

According to insiders, the Gowdas were forced to agree to allow Tipu Jayanti celebrations in the state to keep the government intact. The family feels that honouring the Sultan of Mysore would bring them bad luck, say sources. 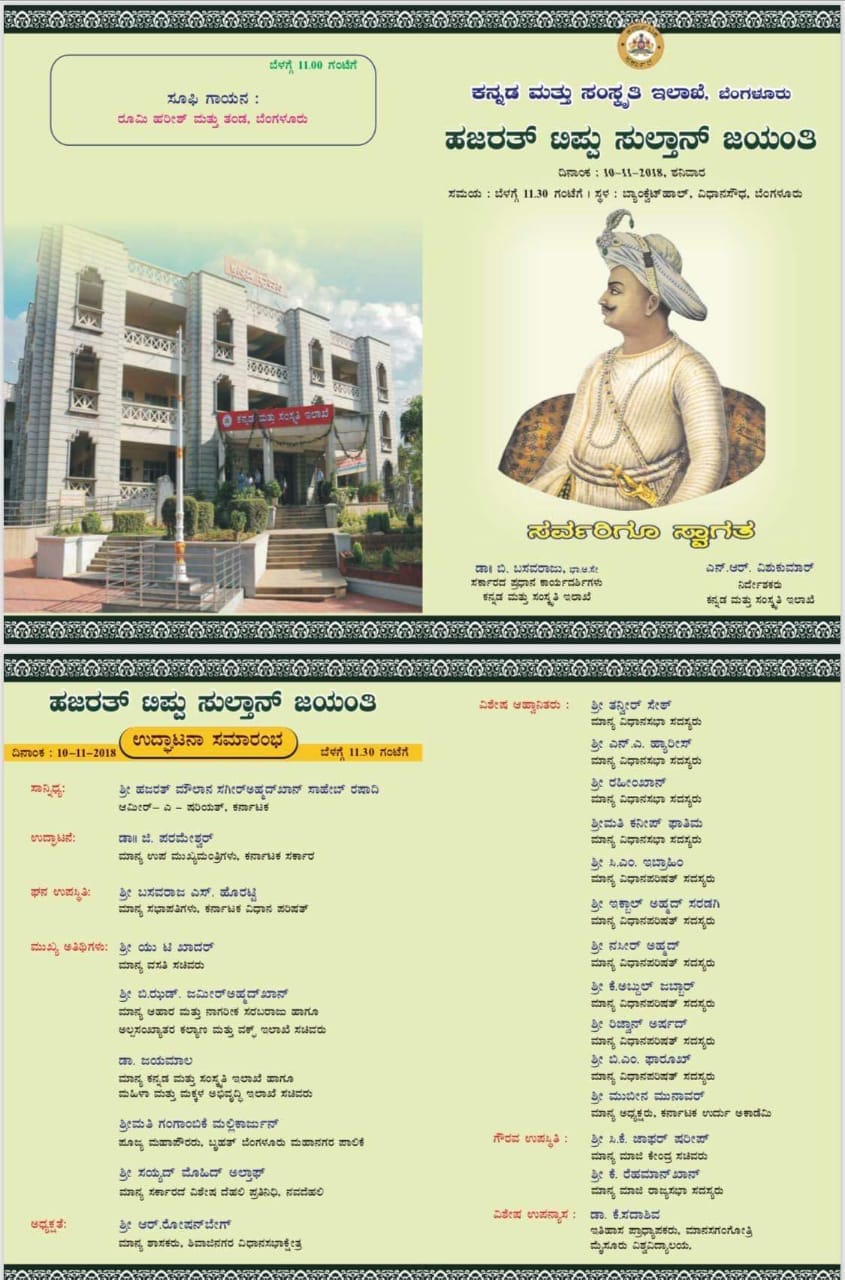 The invitation card for the official event does not mention the name of Chief Minister Kumaraswamy.

The belief reportedly goes that whoever celebrates Tipu, considered by some as a tyrant, will have to pay for it. Supporters of this belief cite the ‘examples’ of actor Sanjay Khan, who almost lost his life during the shooting of The Sword of Tipu Sultan, liquor baron Vijay Mallya who brought Tipu's sword back to Karnataka from England and is now holed up in the same country as a fugitive, and of Siddaramaiah who lost power after he started celebrating Tipu Jayanti.

"Gowda family is a firm believer in fate and ancient beliefs. They fear that celebrating Tipu can be bad for them. The JD(S) was not at all interested in Tipu Jayanti. They are celebrating it this year only because of coalition compulsions," said a close aide of the family.

The JD(S) has almost entirely stayed away from the celebrations across the state and the event looks like an entirely Congress one.

Even though Kumaraswamy has warned the BJP that the government will act firmly if they create law and order issues during Tipu Jayanti, his absence at the state-level event has led to a lot of speculation.

Many in the Congress are also not interested in the event and blame Siddaramaiah for creating an “unnecessary controversy”.

"Siddaramaiah was misled by some elements. He started Tipu Jayanti celebrations. He did not even consult his cabinet colleagues. If we stop now, certain interests will brand us as anti-Muslim. If we go ahead, the BJP will exploit it and pit Hindus against us," said a senior Congress minister on condition of anonymity.

Anticipating trouble, the Karnataka government has asked all 30 district administrations to organise low-key indoor programmes and has banned all outdoor events on Tipu Jayanti.

The BJP has asked its cadre to observe a ‘black day’ on Saturday, calling Tipu a “butcher of Hindus”, and has attacked the Congress for “hurting the sentiments of millions of people”.

Tipu Jayanti was one of the reasons given by local Congress workers for the near rout of the party in coastal and Malnad regions in the recently held Assembly polls.

Tipu, the 18th century military ruler of Mysore kingdom, is an unpopular figure across Kodagu district and has been held responsible for the genocide of Hindus when he invaded it 1780s and 90s.