Swearing-In LIVE: Senior Congress leader Kamal Nath has been sworn-in as Madhya Pradesh CM amid a scathing attack by the BJP following Sajjan Kumar’s conviction in the 1984 anti-Sikh riots cases. Nath has also faced allegations of involvement in the communal riots that followed then PM Indira Gandhi’s assassination. Countering the BJP’s attack, Congress asked the saffron party not to politicise the Delhi High Court’s ruling.

T S Singh Deo and Tamradhwai Sahu, who were once the front-runners for the Chhattisgarh Chief Minister post, also sworn in as Cabinet Ministers.

Raipur: Bhupesh Baghel takes oath as the next Chief Minister of #Chhattisgarh pic.twitter.com/YMOnKaOf92

Baghel's Swearing-in at 4:30 | Bhupesh Baghel is scheduled to take the oath of office at 4:30 pm. Baghel's swearing-in ceremony comes after that of Kamal Nath, the newly elected Chief Minister of Madhya Pradesh.

Former CM Shivraj Singh Chouhan, in exemplary sportsmanship attended the oath-taking ceremony of Kamal Nath and came to the stage to personally congratulate all the senior Congress leaders on their victory. In apprecaition of the gesture, Omar Abdullah took to twitter to post a photo of Chouhan, hoisting hands of Jyotiraditya Schindia on one side and Kamal Nath on the other in celebratory repose. " Respect for Shivraj Singh Chouhan. It can’t have been easy to do this & that too after such a narrow defeat," he wrote.

Respect for @ChouhanShivraj. It can’t have been easy to do this & that too after such a narrow defeat. pic.twitter.com/03ndSvhtgu

Kamal Nath Takes Oath to Become New CM of MP | Kamal Nath takes oath as the new Chief Minister of Madhya Pradesh in Bhopal. Nath (72) has been sworn in as the 18th chief minister of Madhya Pradesh. The nine-time Lok Sabha member from Chhindwara was elected as the leader of Congress Legislature Party Thursday night.The Congress emerged as the single largest party by bagging 114 seats in the 230-member Assembly in the recently concluded state polls. It also secured the support of one SP legislator, two BSP and four independent MLAs to cross the majority mark of 116.

The freshly elected Rajasthan CM Ashok Gehlot, along with his Deputy counterpart Sachin Pilot are also present in Bhopal for the swearing-in ceremony of Kamal Nath as the new CM of Madhya Pradesh.

Sanjay Singh No Longer to Attend Swearing-in Ceremony of Kamal Nath | AAP leader Sanjay Singh will no longer be attending the swearing-in ceremony of Kamal Nath as the Chief Minister of Madhya Pradesh, as the BJP continues to mount its attack on the Congress leader in light of the recent High Court verdict on the 1984 Anti-Sikh riots of sentencing Sajjan Kumar to life imprisonment. Rahul Gandhi and Other Leaders in Bhopal | Congress President Rahul Gandhi, Former Prime Minister Manmohan Singh and other leaders including Farooq Abdullah and Sharad Yadav have arrived in Bhopal for oath ceremony of Kamal Nath as Madhya Pradesh Chief Minister.

Meanwhile, Congress president Rahul Gandhi on Monday thanked the people of Rajasthan for believing in the party and vowed that the state government will fulfil its responsibilities.His remarks came after senior Congress leader Ashok Gehlot was  sworn in as the chief minister of Rajasthan at a ceremony earlier today, while Sachin Pilot took oath as a cabinet minister. "Thanks to the people of Rajasthan for believing in the Congress. Congratulations to the leaders and workers of the Congress for the success of their struggle," he tweeted  "It is an honour for the Congress party to serve Rajasthan. We will fulfil our responsibility," he added.

BJP national information and technology chief Amit Malviya in a tweet, took a dig at Kamal Nath in light of the recent High Court verdict on the 1984 Anti-Sikh riots. "Ironical that on the day Sajjan Kumar gets life sentence for his role in state sponsored Sikh genocide of 1984, another man named by an eye witness, an IE reporter, for leading a mob that killed two Sikhs in Gurudwara Rakabganj will be sworn in as Congress CM of Madhya Pradesh," he said.

Ironical that on the day Sajjan Kumar gets life sentence for his role in state sponsored Sikh genocide of 1984, another man named by an eye witness, an IE reporter, for leading a mob that killed two Sikhs in Gurudwara Rakabganj will be sworn in as Congress CM of Madhya Pradesh.

While Shivraj Singh Chouhan was affable and accessible, Kamal Nath is a far cry from his 'on-of-the-soil' image. In Rajasthan, the genial and low-key Ashok Gehlot replaces Vasundhara Raje.

Spotlight on Kamal Nath | After Delhi high court's hearing on 1984 anti-Sikh riots case, convicting Congress leader Sajjan Kumar for conspiracy to commit murder in the 1984 anti-Sikh riots and sentencing him to imprisonment for life, Union Minister Arun Jaitley pointed at MP CM designate Kamal Nath and said that the Sikh community strongly believes that he was involved in the violence. He further slammed the Gandhi family for "making sure that the riot victims don't get justice".

Several leaders from the Congress and its alliance partners from across the country attended the oath-taking cereony of Ashok Gehlot as the CM and Sachin Pilot as his deputy. Outgoing Rajasthan chief minister Vasundhara Raje, NCP's Sharad Pawar, LJD leader Sharad Yadav, former Jammu and Kashmir chief minister Farooq Abdullah, Andhra Pradesh Chief Minister N. Chandrababu Naidu, RJD leader Tejashwi Yadav, DMK leader M K Stalin, JMM leader Hemant Soren, JVM leader Babulal Marandi were among others who were present at the ceremony. Gehlot, Pilot and other leaders received Rahul Gandhi, Manmohan Singh at the airport and left for the Albert Hall in a bus amid tight security arrangements. Large number of the party members and supporters were present in the oath ceremony. 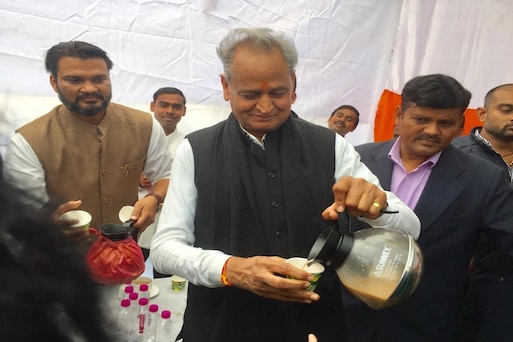 The defeat of many senior ministers of Vasundhra Raje government reflect the magnitude of the loss. Even the Chief Minister herself faced a tough fight from Manvendra Singh, son of Jaswant Singh.

Maywati Skips Kamal Nath's Oath-Taking | Despite helping Congress touch the majority in MP, Bahujan Samaj Party chief Mayawati has decided to remain absent from the oath taking ceremony.  Commenting upon her absence, Kamal Nath said, "She had a genuine reason, she told me she had pulled a nerve."  The absence of Mayawati, along with that of Akhilesh Yadav, will mean the ceremonies won't be the dazzling opposition show of strength first seen at the oath of Mr Kumaraswamy in Karnataka in May this year.

Oath-taking ceremonies are usually organised at the Raj Bhawan. However, the function in 2003 and 2013, when Vasundhara Raje took oath as chief minister, was held at Janpath outside the Rajasthan Assembly building. And this time, Albert Hall has been decided as the venue for the event. Leader of Opposition in Lok Sabha Mallikarjun Kharge, Puducherry CM V Narayanasamy, Punjab CM Amarinder Singh, former Haryana CM Bhupinder Singh Hooda and others attended the function.

Ashok Gehlot Takes Oath | A galaxy of political leaders and Congress workers witnessed Ashok Gehlot return as the Rajasthan chief minister with Sachin Pilot as his deputy on Monday as the duo took oath on the premises of the historic Albert Hall in Jaipur.

Trinamool Congress MP Dinesh Trivedi will be representing the party at the event. "I have been directed by the party chief (Banerjee) to be present at Monday's swearing-in programme," Trivedi said. Asked whether he was carrying any message for the function, Trivedi said, "There is no message as such. My going there is a message itself."

Mamata Banerjee Dispatches Dinesh Trivedi to Attend Swearing-in | Even as the Congress tries to unite the Opposition at the swearing-in of senior leader Kamal Nath as the Madhya Pradesh chief minister, West Bengal CM Mamata Banerjee will not attend the ceremony, official sources said on Sunday. There was, however, no reason cited for Banerjee not going to Bhopal for the swearing-in ceremony on Monday, an official of the Chief Minister's Office (CMO) said.

Starting this morning with Rajasthan, the Congress has planned back-to-back swearing-in ceremonies in the three states where the party emerged victorious in the Assembly elections of this time. Ashok Gehlot will be sworn in as Rajasthan Chief Minister in Jaipur in the morning, Kamal Nath will take the oath in Madhya Pradesh's capital Bhopal around 1 pm and Bhupesh Baghel will take charge in Chhattisgarh's Raipur at 4 pm.

Earlier, senior Congress leader Ashok Gehlot was sworn in as the chief minister of Rajasthan, while Sachin Pilot took oath as a cabinet minister. The party has announced that Pilot will be the state's deputy chief minister.

Rajasthan Governor Kalyan Singh administered the oath of office to Gehlot and Pilot in the presence of Congress president Rahul Gandhi and former prime minister Manmohan Singh at the Albert Hall.

Several leaders from the Congress and its alliance partners from across the country attended the event.

The governor said on the suggestion of Gehlot, Pilot will be deputy chief minister of Rajasthan.

Gehlot, Pilot and other leaders received Rahul Gandhi, Manmohan Singh at the airport and left for the Albert Hall in a bus amid tight security arrangements.

Large number of the party members and supporters were present in the oath ceremony.