Taking the Battle to Mamata Banerjee: What Makes West Bengal So Important For the BJP

According to analysts, the contest in West Bengal will only be between Mamata Bannerjee's AITC and the BJP in 2019 as Congress and the Left have lost their relevance in the state.

Senior BJP leaders, including its president Amit Shah and Prime Minister Narendra Modi, have held several rallies in West Bengal over the past couple of months. The party tried and failed to take out a rath yatra and is pushing hard for the controversial bill that seeks to provide citizenship to ‘non-Muslim’ immigrants.

Most recently, PM Modi addressed two back-to-back rallies in the state on Saturday, kick-starting BJP’s campaign for the upcoming polls. But why is the BJP making all these extra efforts in Bengal?

For quite some while now, political analysts have been speculating that BJP might not be able to repeat its 2014 Lok Sabha performance in the upcoming polls, mainly on account of a possible poor show in the Hindi-heartland.

The party had swept the heartland in 2014, bagging 192 out of the 226 seats available in Uttar Pradesh, Uttarakhand, Himachal Pradesh, Rajasthan, Madhya Pradesh, Jharkhand, Chhattisgarh, Bihar and Delhi. It was this region that propelled it to an absolute majority in the Parliament for the first time.

Among these 192 seats, the BJP had won 71 of the 80 seats in UP the last time. But with Samajwadi Party and the Bahujan Samaj Party forming an alliance this time around, the competition is expected to be much tighter.

Similarly, BJP had swept Rajasthan, Madhya Pradesh, Chhattisgarh and Jharkhand in 2014 but with recent defeats in the first three states, the chances of the replication of previous results look bleak.

Since 2014, BJP has managed to form governments—either on its own or in alliance—in six out of the seven states in the North-East. The BJP has been eyeing the region, which holds 24 seats in total, to make-up for its losses elsewhere.

But that probably won’t be enough and that’s where West Bengal becomes crucial for the party. The state has 42 seats, the third largest share in the parliament after Uttar Pradesh (80) and Maharashtra (48). Amid the Modi wave, BJP had won two seats in the state with a vote share of 17 percent, its highest ever and behind only the All India Trinamool Congress (AITC) and the CPM.

Other than the seats won, BJP had a vote share of over 20 percent in at least 9 constituencies and was at the second spot in three of those. 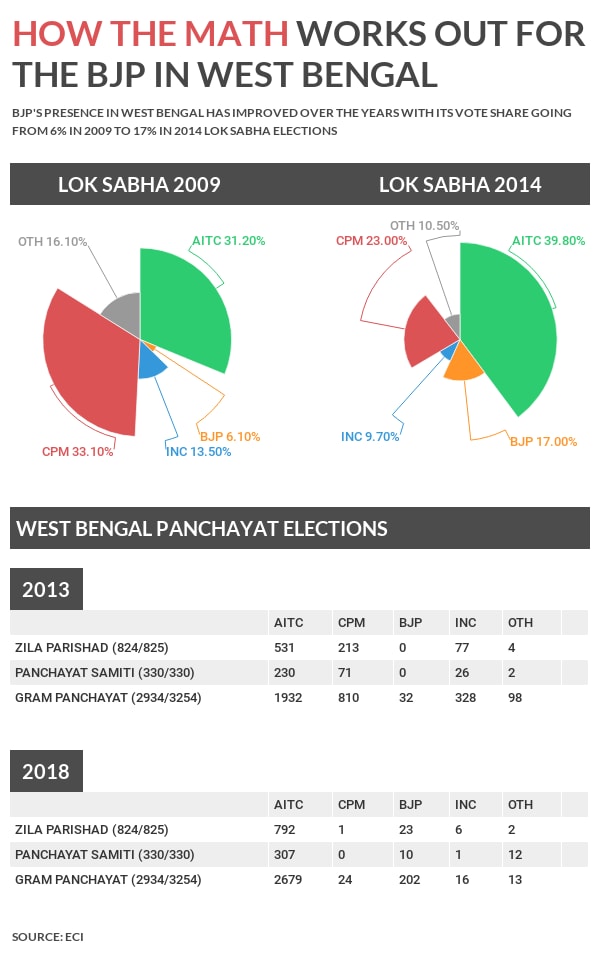 The party has emerged as the main opposition to the AITC, collecting the second highest vote share in all the bye-elections held since 2015 in the state.

Even in last year’s Panchayat polls, where AITC registered a landslide victory, BJP performed significantly better than CPM and Congress and its own performance in 2013. So, while the CPM came down to one Zila Parishad seat from 213 in 2013, BJP went from zero in the last election to 23 in 2018. Sanjay Kumar, director at the Centre for the Study of Developing Societies (CSDS), said that BJP is targeting West Bengal because it may not be able to offset its losses from southern states.

"There are definite chances of BJP losing seats in the Hindi-heartland compared to the number of seats (BJP) won in 2014. So, if they are losing in these five-six states, they need to make up for these losses. They cannot make up for the losses in Tamil Nadu, Andhra Pradesh, Telangana or in Kerala because BJP's presence in these states is very less. So, they have to look for some states and look for the possibility whether they will be able to increase their tally. In that context, West Bengal is the target for BJP," said Kumar.

According to Kumar, the contest in West Bengal will only be between Mamata Bannerjee's AITC and the BJP in 2019 as Congress and the Left have lost their relevance in the state.

"There is no doubt that BJP is the number two party in West Bengal now. And the contest of 2019 is going to be between Mamata Banerjee and BJP. I won't be surprised if both Congress and the left end-up with zero seats or maybe just one or two seats between both of them in West Bengal. While I don't think that Mamata Banerjee has lost ground, BJP is just trying to galvanise all the anti-Mamata votes in its favour because people don't see Congress and the left in the contest. I won't be surprised if BJP ends up with 9-10 seats in WB," Kumar opined.

With continuous gains in recent years, if the BJP manages to put up a good show in West Bengal in the upcoming Lok Sabha elections then they could very well offset at least some of their damage in the Hindi-heartland.