Telangana Assembly Elections Live Updates: Majority of exit polls have predicted a sweep for the TRS in the state, except India Today-AXIS which shows the Congress has an upper hand in the state.

Earlier in the day, after badminton player Jwala Gutta claimed that her name 'disappeared' from Telangana voter list, IPS officer T Krishna Prasad also tweeted about his missing name. He hit out at the Election Commission for "denying" him his right to vote. Delhi deputy chief minister too, slammed EC over the issue.

Within the first three hours of polling in Telangana, 12 Assembly constituencies, in the united district, crossed a 11% mark. Munugode in Nalgonda reported the highest poll percentage at 21.63.

About 70 percent poll turnout recorded in the Telangana Assembly election on Friday as the polling ended on a peaceful note, barring minor incidents. Polling ended in 106 constituencies at 5pm, but those standing in queues were allowed to cast their votes. The exact poll percentage will be known after receipt of detailed reports from the districts, officials said in Hyderabad. Heavy polling was recorded in the Telangana Assembly election, with officials reporting 48 % voter turnout by 1 pm.

A lot of complaints regarding missing names in voters list and bogus voting have cropped up as polling nears end in Telangana, especially in the older city area.

Low turnout observed in urban areas especially in Hyderabad recording 51.32% compared to 53.13 in the 2014 general elections.

EC Bars Airing of Exit Polls Till 5.30pm | As per the notification issued by the PIB, the election commission has barred airing of exit polls till 5.30pm and displaying any election matter including results of any opinion poll or any other poll survey, in any electronic media, is prohibited during the period of 48 hours ending with the hour fixed for conclusion of poll.

Some stole a 🚌 and vanished for 2 days! Others slipped away & were found drinking in a hotel.

In Modi’s India, the EVMs have mysterious powers 😎

After blocking voters with approved alternative IDs from casting vote, Mahmood Quadri, MIM corporate of Pathergatti, Charminar got into an argument with the Telangana police. Later, the EC clarified that as long as voters have their name registered in the list, they can exercise their franchise with the alternative documents like passport, driving licence, Aadhaar Card etc in lieu of Voter ID.

Telanagana Sees 56.17% Turnout Till 3pm | The spokesperson of the Election commission has announced 56.17% poll turnout in Telangana, with Jukkal recording the highest turnout of 67.91% till 3pm.

Jwala Gutta said her mother was, however, able to vote. Her father Kranti Gutta said that Jwala's name was found in the voters' list around one month ago. He claimed his attempt to enrol online as a voter was not successful. The concerned polling station is in Banjara Hills in the city, he said. Jwala Gutta has won several medals, including in the Commonweath Games. 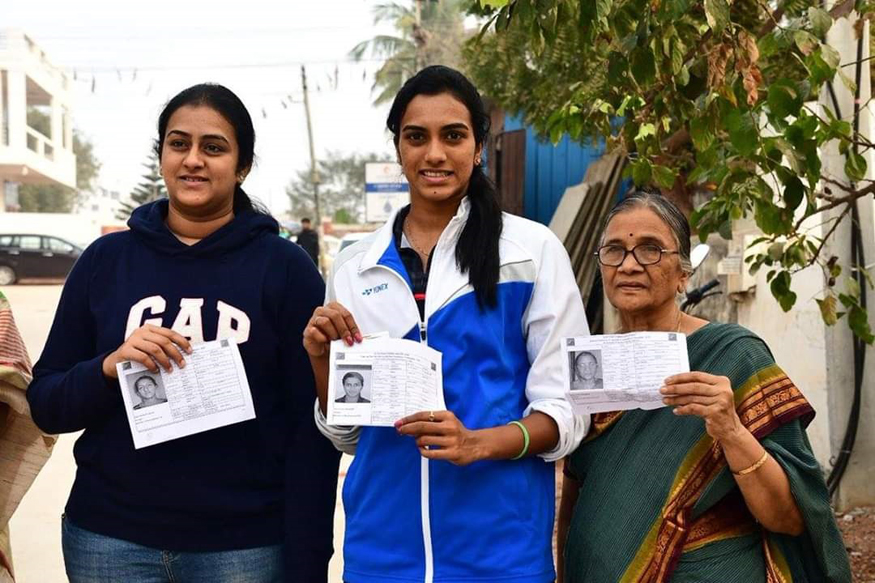 KCR Confident of Victory | TRS president K Chandrasekhar Rao on Friday exuded confidence that his party would come back to power in Telangana with a "huge majority." There is a "very, very positive" mood among voters towards the party, KCR, as Rao is popularly known as, told reporters at his native village Chintamadaka where he cast his vote in the Assembly polls. The Telangana Rashtra Samiti (TRS) is going alone in the polls. The principal challenger to TRS in the polls is the 'People's Front' forged by Congress, TDP, CPI and Telangana.

Watch Out for Exit Polls at News18.com from 5 pm |  After voting ends for the last two states at 5 pm, News18.com will bring you its exit poll that will give you an insight into voters' views and polling trends in Telangana, Rajasthan, Madhya Pradesh, Chhattisgarh and Mizoram. You can also watch the exit polls live on CNN-News18 for our extensive broadcast coverage.

"I checked my name online two-three weeks ago, my mother's and my name were there, my father's and my sister's were missing. Today when we went to cast vote, my name was also missing. I don't understand how did that happen. I've been living here for 12 years," says Jwala Gutta after her name went missing from Telangana voter list.

Voters, Please Don't Click Selfies Inside Booth, Else..... | A man was taken into custody after he allegedly took a selfie while casting his vote at a polling station in Rajendra Nagar here on Friday, police said. The voter identified as Shiv Shankar, clicked a selfie inside the polling booth this morning, following which a complaint was lodged by an election official and a case was registered, they said. "Use of mobile phone within the polling station is prohibited. He took a selfie inside the polling station and has been taken into custody," Deputy Commissioner of Police (Shamshabad Zone) N Prakash Reddy said. A case under IPC section 188 (Disobedience to order duly promulgated by public servant) has been registered, the DCP said. The Election Commission has banned use of mobile phones inside polling stations.

Did You Get an 'Inked Selfie'? | Greater Hyderabad Municipal Corporation has set up selfie booths outside voting station to encourage residents to exercise their franchise and spread the word through special pictures.

Come out and vote tommorow. Let's exercise our Responsibility and facilitate the triumph of Democracy. #HyderabadVotes #Elections2018 @GHMCOnline #TelanganaElection2018 pic.twitter.com/hUOQ9buf15

Another Prominent Name Missing from Telangana Voter List | After badminton star Jwala Gutta, it's Telangana's Road Safety and Railways Director General of Police T. Krishna Prasad, whose name is missing from the voter list. He also took to social media to express his anger.

Today, I went to the Polling Station only to be told that my name is not there in the Voter list inspite of having a Voter ID card issued by ECI and a verification.
I returned home https://t.co/jwsZzNZ2ZZ Right to Vote has been denied.
Thanks to Election Commission. pic.twitter.com/iLT4TBOb5r

Poll of Polls With News18 | Don't forget to log onto News18.com for exit polls this evening. Also, watch it live on CNN-News18 with psephologist Surjit Bhalla.

#ElectionsWithNews18 - The power of numbers comes alive with India’s most trusted psephologist – the man who got Bihar and Uttar Pradesh right, Surjit Bhalla. #BattleForTheStates #RoadTo2019

Tune in to CNN-News18 on 7th December, 2018 from 5 PM onwards. pic.twitter.com/XwfkisVTVi

Tennis star Sania Mirza posted her inked finger after voting in Hyderabad and requested Telangana residents to make use of their right to vote.

Be a part of your democracy ..
Right and duty to Vote..
🇮🇳 pic.twitter.com/Gix011IVgZ

AIMIM president Asaduddin Owaisi on Friday exuded confidence that his party would be successful in Telangana Assembly polls. "I am hopeful. I am fully confident that we will be successful in every seat. I hope people of Hyderabad, people of Telangana take this little difficulty, go out of homes and use their vote," he told reporters in Hyderabad. The AIMIM has fielded candidates in eight assembly segments in Hyderabad out of the total 119 seats in the state. It is supporting TRS in other segments. Owaisi cast his vote in Rajendranagar Assembly segment in the city Friday.

Voting to End at 5pm; Do Keep a Tab on Exit Polls on News18.com | Voting will conclude at 5 PM, except in 13 constituencies classified as Left Wing Extremist-affected where the process ends at 4 PM. The CEO had said those in queues at polling stations before 5 PM would be allowed to vote. Telangana and Andhra Pradesh Governor ESL Narasimhan and his wife Vimala Narasimhan, caretaker Chief Minister K T Rama Rao and his deputy Kadiyam Srihari, state minister Harish Rao, BJP Telangana chief K Laxman, former Union Minister Bandaru Dattatreya, AIMIM chief Asaduddin Owaisi, TJS president Kodandaram are among the leaders who cast their votes.

Telangana Registers 48.09% Voter Turnout Till 1 pm | Telangana registers 48.09% voter turnout till 1 pm. Voting commenced at sharp 7 AM, though at some polling stations there was a delay of about 10-15 minutes, he noted. In one or two cases, the EVMs had to be replaced, Chief Electoral Officer Rajat Kumar said. "It (polling) is going on very satisfactorily..I want to thank Telangana voters," he added. Responding to a query on the alleged attack on Kalwakurthy Congress candidate Vamshi Chand Reddy, Kumar said the district electoral officer is inquiring into the matter. Earlier, Telangana Congress president Uttam Kumar Reddy had alleged that Vamshi was attacked by BJP cadres during his visit to Amangal in his constituency to observe the poll pattern. Polling is underway in the 119 assembly constituencies in the state amid elaborate arrangements.

Telangana Congress president N Uttam Kumar Reddy voted along with his MLA wife Padmavathi. Meanwhile, the grand old party alleged that police raided the house of Reddy's aide on Thursday as a part of "political vendetta". However, the Hyderabad police denied that any raid such had been carried out. 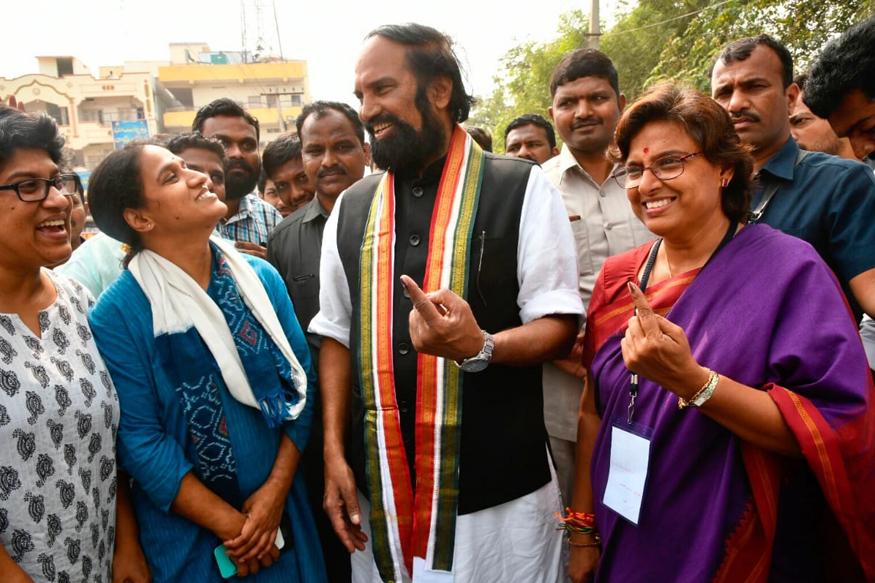 Any answer Election Commission of India? A pride player has lost her voting right!

Oh ECI! You must be busy with strategies being instructed from BJP war room. https://t.co/226EdH6qUk

BJP MP Bandaru Dattatreya casts his vote at booth no.229 in Ramnagar of Musheerabad constituency in Hyderabad.

Telangana: BJP MP Bandaru Dattatreya casts his vote at booth no.229 in Ramnagar of Musheerabad constituency in Hyderabad. #TelanganaElections pic.twitter.com/D8gLFfJBUj

Watch Out for Exit Polls at News18.com from 5 pm |  After voting ends for the last two states at 5 pm, News18.com will bring you its exit poll that will give you an insight into voters' views and polling trends in Telangana, Rajasthan, Madhya Pradesh, Chhattisgarh and Mizoram. You can also watch the exit polls live on CNN-News18 for our extensive broadcast coverage.


Meanwhile, Telugu stars K Chiranjeevi, Akkineni Nagarjuna and 'Baahubali' director SS Rajamouli were among top celebrities from the film industry to cast their votes in assembly elections. Tennis star Sania Mirza also exercised her franchise along with her family in Hyderabad. With just two hours left for polling, all eyes are now on the exit polls. News18.com will begin its extensive coverage of the probable trends soon after voting ends.

After a high-voltage campaign that saw war of words among contending parties, Telangana votes for a new Assembly on Friday with the Congress-led alliance challenging the ruling TRS, and the BJP seeking to make it a triangular contest. Voting has started for 119 seats in the Telangana assembly elections but the start has been marred by glitches in Hyderabad, Pedapalle, Karimnagar and Khammam. There have also been reports of names going missing from electoral rolls. Among those who complained is Badminton player Jwala Gutta, who said she was surprised to see my name disappear from the voting list after checking online.

Over 2.80 crore electorate are eligible to exercise their franchise in the State, which has a total of 32,815 polling stations across. Campaigning by political parties came to an end at 5 pm Wednesday. Additional DG (Law and order) Jitender Thursday said about one lakh police personnel including 25,000 central paramilitary forces and 20,000 from other states are engaged in poll duties.

The assembly polls in Telangana were originally scheduled to be held simultaneously with the Lok Sabha elections next year, but the House was dissolved on September 6 as per a recommendation by the state cabinet. It is to be seen if KCR's gamble to opt for early elections pays off. The Congress has stitched together "Prajakutami" (People's Front) along with the Telugu Desam Party (TDP), the Telangana Jana Samiti (TJS) and the CPI to take on the ruling TRS, led by caretaker Chief Minister K Chandrasekhar Rao (KCR). The TRS, seeking a second term in office, is going alone, as also the BJP.