UP Elections 2022 Voting LIVE Updates: Today's polling will also be an acid test of the alliances forged by both the BJP and the Samajwadi Party with small caste-based parties.

UP Elections 2022 Voting LIVE Updates: Over 35 per cent voter turnout was recorded in the first six hours of polling for the seventh and last phase of the Uttar Pradesh Assembly elections for 54 seats on Monday. Voting started at 7 am and will end at 4 pm in Chakia (Chandauli), Robertsganj and Duddhi (Sonbhadra) seats while in the rest of the segments, it will continue till 6 pm. The districts where polls are underway in this Read More

In the seventh and final phase of UP polls, 54.18% voters turnout recorded till 5 pm on Monday. Campaigning in this phase reached its crescendo with Prime Minister Modi leading the BJP’s poll blitzkrieg in Varanasi and its adjoining districts. The state has 403 Assembly seats and the results of the elections will be declared on March 10.

Fate of Suheldev Bharatiya, Om Prakash Rajbhar to be Decided in Phase 7

The fate of Suheldev Bharatiya Samaj Party president Om Prakash Rajbhar and several state ministers will be decided in this round, in which 2.06 crore people are eligible to vote. Besides state Tourism Minister Neelkanth Tiwari, who is contesting for the Varanasi South seat, other ministers in the fray in the last leg of the elections are Anil Rajbhar (Shivpur-Varanasi), Ravindra Jaiswal (Varanasi North), Girish Yadav (Jaunpur) and Ramashankar Singh Patel (Marihan-Mirzapur). Dara Singh Chauhan, who had resigned from the Yogi Adityanath cabinet and had joined the SP, is contesting from the Ghosi seat in Mau. Om Prakash Rajbhar (Zahoorabad), Dhananjay Singh (Malhani-Jaunpur) as the JD(U) candidate, and Abbas Ansari, the son of gangster-turned-politician Mukhtar Ansari, from Mau Sadar seat, are contesting in this phase.

UP Polls 7th Phase: Over 46 %Turnout Recorded Till 3 Pm

Over 46 per cent voter turnout was recorded till 3 pm in the seventh and last phase of the Uttar Pradesh Assembly elections for 54 seats on Monday. Voting started at 7 am. It ended at 4 pm in the Chakia (Chandauli), Robertsganj and the Duddhi (Sonbhadra) seats, while in the rest of the segments, it will continue till 6 pm. READ MORE

Polling Underway in 9 Districts, Including Varanasi

The districts where polls are underway in this phase are Azamgarh, Mau, Jaunpur, Ghazipur, Chandauli, Varanasi, Mirzapur, Bhadohi and Sonbhadra. The voting percentage till 3 pm was 46.40 per cent, according to the ECI’s Voter Turnout app.

46.4% Polling Till 3pm, Highest in Chandauli

A voter turnout of 46.4% was recorded till 4pm on Monday in Uttar Pradesh, where the polling is underway for Phase 7 amid tight security. Five long weeks of election campaigning do not take a toll on just politicians, but also journalists. Covering an election amidst a pandemic, in states where people think Covid-19 is over and face masks are history, is another compounding challenge. But elections are all about meeting people, knowing if the situation on the ground has changed since the last polls and experiencing the changing polity. Here are some takeaways from Ground Zero. READ MORE

Samajwadi Party chief Akhilesh Yadav said that the Narendra Modi-led government at the Centre did not “evacuate” people from Ukraine but took credit for it. “Don’t know which international recognition they boast about. They (BJP-led Centre) failed to evacuate Indians, named evacuation op ‘Operation Ganga’ because polls in Varanasi too. Had they rescued our people from #Ukraine directly I would’ve appreciated it.”

On Saturday, Uttar Pradesh chief minister Yogi Adityanath will finish his election campaign with a rally in Azamgarh’s Atraulia, a seat that the Bharatiya Janata Party has never won. By doing five public meetings on the last day of canvassing, CM Yogi will complete nearly 200 rallies and roadshows in this election campaign. READ MORE

UP Elections: Singer, Sadhu, Septuagenarians Among Voters in Final Phase of Polling | In Photos

Over 21 per cent of voters exercised their right in the first four hours of polling for the seventh and last phase of the Uttar Pradesh Assembly elections for 54 seats on Monday. See photos.

UP Elections: Ruling Party Can Use 'Unfair' Means During Counting of Votes: Tikait

Bhartya Kisan Union (BKU) national spokesperson Rakesh Tikait has alleged that the ruling party can use “unfair” means during the counting of votes for the Uttar Pradesh elections on March 10. Voting in the six assembly seats, including Muzaffarnagar, Budhana, Pyrkazi, Khatoli, Murapur and Charthawal were held in first phase on February 10.

Exit Polls Today: When and Where to Watch Exit Poll Results for 2022 Assembly Elections

After the seventh and final phase of voting in Uttar Pradesh, the Assembly elections in five states will come to an end on Monday. The results of the elections in Uttar Pradesh, Uttarakhand, Punjab, Goa, and Manipur will be announced on March 10. However, voters keenly watch out for what the exit polls say, giving a good idea of how the high-stakes battles on D-Day might play out. READ MORE

UP Records 35.51% Polling in Seventh Phase Till 1pm

Uttar Pradesh has recorded 35.51% voter turnout till 1 pm in the seventh phase of polling for assembly elections. Polling is underway in 54 Assembly seats across 9 districts.

BSP supremo Mayawati on Sunday said it is essential to form a strong government that takes cares of all sections of the society. “Voting on 54 seats in nine districts of Uttar Pradesh will be held in the last phase of polling tomorrow. The neglected people facing poverty and unemployment can work to change their fate and that of the state with the power of their votes. It is necessary to form an ‘iron government’ of BSP to ensure the welfare and happiness of all,” she said in a tweet in Hindi.

Samajwadi Party chief Akhilesh Yadav said that BJP led government failed to evacuate Indian and named the evacuation operation as ‘Operation Ganga’ due to polls in Varanasi. “Don’t know which international recognition they boast about. They (BJP-led Centre) failed to evacuate Indians; named evacuation operation ‘Operation Ganga’ because polls in Varanasi too. Had they rescued our people from Ukraine, I would’ve appreciated it,” SP chief Akhilesh Yadav said.

#WATCH | Azamgarh: An elderly person reaches polling booth by pulling a cart, with his wife who has a fracture & a handicapped woman on it. "I've back problem & my wife also not well, hence, used this cart. We've no expectations. Can Rs 500, 1000 (given by state)cure us?" he said pic.twitter.com/tn0RcvwMrC

Hindustani classical singer Pandit Chhannulal Mishra casts his vote in seventh phase of Assembly elections in Varanasi. “I appeal to the public to come out and vote in large numbers. Each vote counts,” he said. 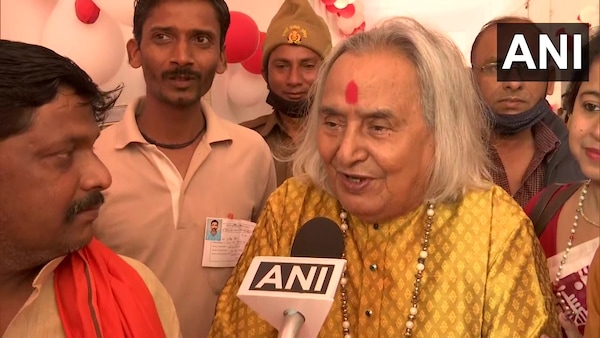 The district of Azamgarh has registered 20.09% turnout till 11am. The district has 10 seats where polling is currently underway. The BJP has been trying to make inroads in the district, which has been a SP bastion for long. 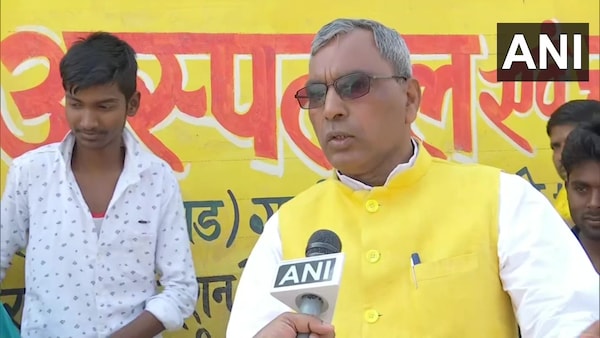 Durga Prasad Yadav, an 8-time MLA from Samajwadi Party in Azamgarh Sadar said that his party will win on all the ten seats in the district. “BJP and BSP will be defeated. We work for people, we don’t do Hindu-Muslim to win elections,” Yadav said.

UP Records 35.51% Polling in Seventh Phase Till 1pm

UP Records 8.58% Polling in Seventh Phase Till 9am

phase are Azamgarh, Mau, Jaunpur, Ghazipur, Chandauli, Varanasi, Mirzapur, Bhadohi and Sonbhadra. The voting percentage till 9 am is 8.58 per cent, according the ECI’s Voter Turnout app. UP Assembly Election Result 2022 LIVE Updates

Prime Minister Narendra Modi’s constituency Varanasi is among the heavyweight constituencies that will go to polls. Azamgarh, Mau, Jaunpur, Ghazipur, Chandauli, Mirzapur, Bhadohi and Sonbhadra are the other districts where polls will take place till 6 pm today.

Curtains came down on the two-month-long campaigning on Saturday, which saw political parties trading barbs on issues, including Covid-19, law and order, farmers’ protest and economy.

Monday will also mark the end of the almost month-long election process in UP. The first phase of polling was held on February 10. The votes will be counted on March 10.

The final phase will see around 2.06 crore voters exercising their franchise in the 54 seats, which include 11 Scheduled Castes and two Scheduled Tribes constituencies.

Monday’s polling will also be an acid test of the alliances forged by both the BJP and the Samajwadi Party (SP) with small caste-based parties. In this election, BJP has allied with Apna Dal (Sonelal) and Nishad Party, while SP chief Akhilesh Yadav has joined hands with Apna Dal (K) and Suheldev Bharatiya Samaj Party (SBSP) of Om Prakash Rajbhar.