NCP spokesperson and Maharashtra minister Nawab Malik told reporters here that the outcome of the final talks with the Shiv Sena will be announced by his senior party colleague Praful Patel.

NCP and Shiv Sena leaders will meet in Goa on Tuesday to discuss a prepoll alliance between the two parties in the coastal state for the next month’s assembly elections, the Sharad Pawar-led outfit said on Monday. The two Maha Vikas Aghadi (MVA) allies in Maharashtra are contemplating an alliance in Goa after the Congress declined to have seat adjustments with them for the February 14 polls to the 40-member assembly. Read More

Punjab Chief Minister Charanjit Singh Channi on Monday said he would talk to his brother Manohar Singh over the denial of the Congress ticket to him. Channi made the remark after his brother said he will contest as an independent from the Bassi Pathana assembly seat against the sitting Congress MLA. Read More

With the BJP deciding to field UP CM Yogi Adityanath from his home turf Gorakhpur (Urban) assembly seat in the February polls, SP chief Akhilesh Yadav on Monday sought to woo the sitting BJP MLA Radha Mohan Aggarwal, offering him his party ticket for the seat. Asked about BJP’s Gorakhpur (Urban) MLA Aggarwal, the Samajwadi Party chief told reporters here, “If you (reporters) can establish contact with him and speak to him, the ticket will be announced and he will get the ticket. Yadav was speaking to reporters at his party headquarters on the occasion of ‘Ann Sankalp Divas’. Agarwal has been the MLA from Gorakhpur Urban seat since 2002. Read More

Harak Singh Rawat Expelled from BJP as He Mounted Pressure for Party Tickets to Kin: Dhami

Uttarakhand CM Pushkar Singh Dhami on Monday said Cabinet minister Harak Singh Rawat was expelled from the BJP as he was “mounting pressure” for party tickets to his family members ahead of the Assembly polls. The assembly polls in the state are slated for February 14. The BJP expelled Harak Singh Rawat from the primary membership of the party for six years on Sunday amid speculations that he was joining the Congress. Rawat was in the news recently when he threatened to resign from the state Cabinet insisting on his demand for a medical college in Haridwar. Dhami told reporters after returning from Delhi that the party stood with Rawat on every development-based issue, including a medical college in Kotdwar. Read More

Addressing a presser, Punjab Chief Minister Charanjit Singh Channi said, “I would like to thank the EC. I wrote a letter and requested them to extend the polling date.”

NCP leaders Praful Patel and Jitendra Avhad to reach Goa on Tuesday to take a decision on alliance with Congress for the upcoming polls in the state. Local level decisions will be taken in every state. The Congress isn’t in favour of any alliance in Goa. “We will speak with Sena as Shiv Sena has expressed desire to fight together. “We will take a call on it tomorrow,” said NCP leader Nawab Malik.

Congress Not Forming Any Alliance With TMC for Goa: Dinesh Gundu Rao

“Congress is the only alternative to form a stable government in Goa. TMC’s approach in Goa is very poor and their objective is wrong. People of Goa are going to reject TMC in the election. We are not forming any alliance with them,” ANI quoted Dinesh Gundu Rao, AICC Goa in-charge as saying.

AIMIM to Contest on 100 Seats in UP: Owaisi

We have announced to contest 100 seats for the upcoming UP Assembly elections; more candidates for other phases will be announced. We’ve made arrangements to conduct virtual rallies, as per the Election Commission’s guidelines: AIMIM chief Asaduddin Owaisi in Hyderabad. 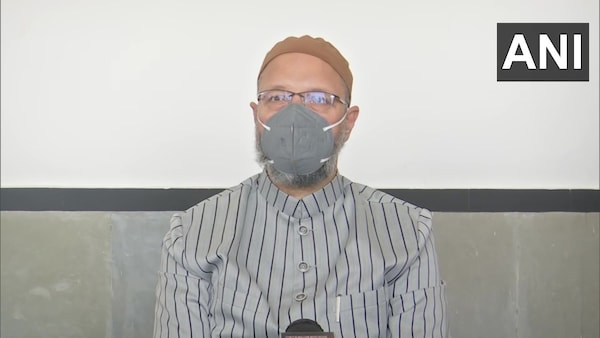 Weeks after he walked out of the Congress fold, joined the Trinamool Congress and quit it a day before without assigning any reason, former Goa Congress working president Aleixo Reginaldo Lourenco on Monday hinted at rejoining his parent party. He has apologised to his supporters and well-wishers for committing the “mistake” of joining the Mamata Banerjee-led party ahead of next month’s assembly polls. Addressing a press conference in Panaji on Monday, Lourenco said he had to face severe backlash after deciding to join the TMC, which he said had promised a “new dawn”.

The Election Commission on Monday decided to hold the single-phase assembly polls in Punjab on February 20 instead of February 14 in view of Guru Ravidas Jayanti. Several political parties had approached the EC to postpone the polls in the state in view of Ravidas Jayanti on February 16. Punjab Chief Minister Charanjit Singh Channi, BJP and its allies, and the BSP had urged the poll panel to postpone the date of voting as lakhs of followers of Guru Ravidas travel to Varanasi in Uttar Pradesh to celebrate the day. In a statement, the Commission said polls would now be held on February 20. It coincides with the third phase of polling in Uttar Pradesh.

After the EC postponed the elections in Punjab, here is the revised schedule: 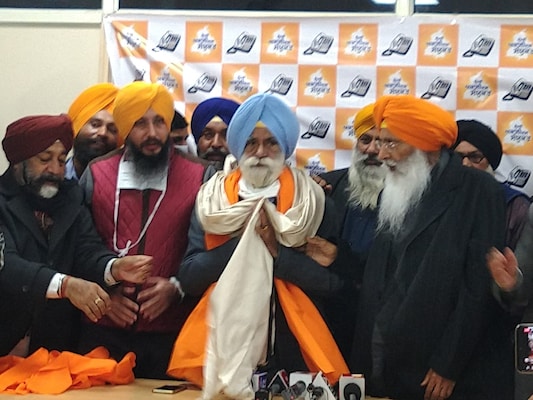 The Election Commission of India has postponed the election date in Punjab to February 20, after requests by the parties in state. 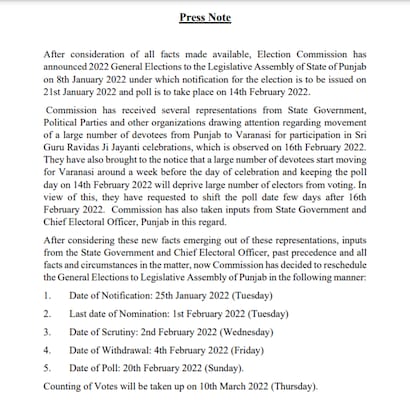 UP: Case Registered Against BJP, BSP MLAs for Violating Model Code of Conduct

A case has been registered against BSP candidate Salman Saeed in Charthawal and BJP MLA Umesh Malik, for violating the Model Code of Conduct and Covid-19 guidelines, police said.

Yogi Adityanath Second UP CM to Contest from Gorakhpur District

Yogi Adityanath, who has been declared BJP candidate from Gorakhpur will be the second leader to contest from the district as a Chief Minister after Tribhuvan Narayan Singh, who lost in 1971. Singh had contested from Maniram assembly seat of the Gorakhpur district while being a Chief Minister. There was a mixed reaction from political parties after Yogi Adityanath was made the BJP candidate from Gorakhpur Sadar seat on Saturday. Main opposition Samajwadi Party chief Akhilesh Yadav on Saturday took a jibe at the BJP’s decision to field Yogi Adityanath from the Gorakhpur constituency, saying the saffron party has already sent him home.

AAP's Chief Ministerial Candidate for Punjab Polls to Be Announced on Tuesday: Kejriwal

Weeks after he walked out of the Congress fold, joined the Trinamool Congress and quit it a day before without assigning any reason, former Goa Congress working president Aleixo Reginaldo Lourenco on Monday hinted at rejoining his parent party. He has apologised to his supporters and well-wishers for committing the “mistake” of joining the Mamata Banerjee-led party ahead of the next month’s Assembly polls. Addressing a press conference in Panaji on Monday, Lourenco said he had to face severe backlash after deciding to join the TMC, which he said had promised a “new dawn”.

AAP leader Arvind Kejriwal said he will make an announcement on Punjab CM candidate on Tuesday at 12pm. The announcement will be made during a press conference in Mohali in Punjab.

Chhattisgarh CM Baghel Booked for Flouting Covid Norms in UP

AAP Releases First List of 150 Candidates for UP Polls

NCP spokesperson and Maharashtra minister Nawab Malik told reporters here that the outcome of the final talks with the Shiv Sena will be announced by his senior party colleague Praful Patel. He said MVA minister and NCP leader Jitendra Awhad will accompany Patel to Goa for the seat-sharing talks.

Malik said the NCP has aligned with the Samajwadi Party in Uttar Pradesh and the Congress in Manipur for the upcoming polls in these states. Referring to Goa, where the BJP is in power, Malik said the local leadership of the Congress has declined to have seat adjustments with them and hence the Shiv Sena and the NCP have decided to contest the polls together.

The Congress is part of the Shiv Sena-led MVA government in Maharashtra.The NCP spokesperson hit back at BJP leader and former CM Devendra Fadnavis over his reported comments referring to the Sharad Pawar-led party as an outfit whose influence is “restricted to three-and-a-half districts of Maharashtra”.

Malik said Fadnavis (51) was not even a member of the state legislature when Pawar was chief minister.Pawar (81) has served as chief minister of Maharashtra multiple times after assuming the top post for the first time in 1978.

“Everyone knows how the NCP fared in the 2019 assembly polls when Fadnavis who was chief minister,” Malik said.