Varun Gandhi is seen sharing space with others including both PM Modi and party president Amit Shah in all billboards.

BJP leader Sidharth Nath Singh, the local lad, is travelling with us a day ahead of the arrival of party president Amit Shah.

A meandering Ganga appears to have stencilled perfect esses across beige planes baked by a searing and unabating heat. It has been an abnormally hot summer. The 72-seater short-haul aircraft we are in takes a slow U-turn as a crackling voice asks passengers to fasten their seat belts for landing. The temperature outside is 43 degrees Celsius.

Bamrauli airport is as elementary as it gets. Only Air India flies to Allahabad - a daily flight which returns to Delhi after a brief stopover.

BJP leader Sidharth Nath Singh, the local lad, is travelling with us a day ahead of the arrival of party president Amit Shah. Civil Aviation ministry will soon install a conveyor belt at the airport, he claims, as we wait for our luggage to be manually delivered at the exit gate. 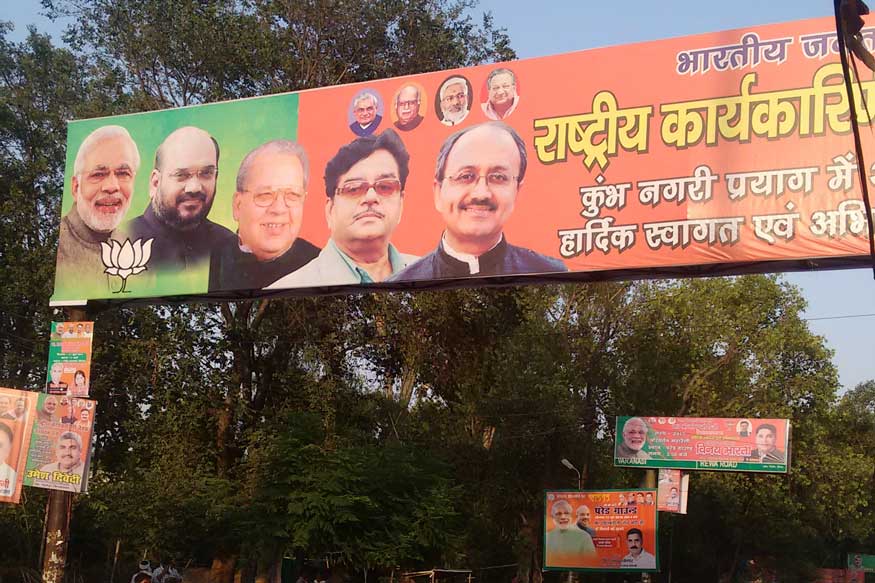 Over the next two days, the entire top BJP brass including Prime Minister Narendra Modi will descend on the erstwhile capital of the pre-independence United Provinces at the confluence of the Ganga, Yamuna and the mythological Saraswati. The show of strength and deliberations in Allahabad are strategically aimed to provide the requisite impetus to the campaign ahead of the Uttar Pradesh polls next year.

Right at the exit of the airport, two huge hoardings of BJP MP from Sultanpur, Varun Gandhi, greet the executive members. They are strategically positioned to immediately draw ones attention. Interesting though, in all billboards, Varun Gandhi is seen sharing space with others including both PM Modi and party president Amit Shah.

Driving down to the tony Civil Lines at the heart of the city, the frequency and size of the hoardings, if anything, grow quite steadily. 'Mission 265', proclaim some, would be achieved in 2017 to catapult BJP to power in UP.

Giving Varun a close fight in this poster war is the state BJP president Keshav Prasad Maurya. The OBC leader is an MP from the adjoining Phulpur constituency. He's been hand-picked by the party to consolidate non-Yadav backward castes. Coming from the VHP stock, he is aggressive, both in his politics and rhetoric.

At an intersection close to the conclave venue, former BJP general secretary Sanjay Joshi, a friend-turned-foe of PM Modi and later banished by the party, makes a surprise appearance in a billboard along with Shatrughan Sinha. The same Bihari Babu who pricked BJP no end during the Bihar elections last year. Allahabad has a sizeable Kayastha population, and who knows some local leader wants to encash on his popularity here as well!

Amid this riot of saffron and green, UP CM Akilesh Yadav makes his presence felt at important roundabouts. Holding on to some of the available advertising space, the 'umeedon ka pradesh' tagline dots key junctions with large footfalls.

By evening, key party functionaries have reached the Kayastha Patshala or KP College where huge tents have been pegged to create a massive pavillion to accommodate 270-odd members of the national executive.

Visibly peeved at the poster war, Singh says "Posters are not a sign of anyone's popularity".

It is well past sunset, and the sweltering heat and humidity continues unabated. Both political and weather conditions in Allahabad are hotting up ahead of the party executive.