Narayanan is the holder of 24 Guinness world records.

Madurai Taekwondo player Narayanan (31) began practicing Taekwondo to divert himself from the grief of losing his father and now holds 24 Guinness World Records.

There’s an ‘optimistic’ quote that says, ‘Sometimes life is hard, but you got to be strong and keep moving on.’ Bringing life to the quote, Madurai Taekwondo player Narayanan (31), who was an ex-software engineer in Chennai, hailing from Chinna Sokkikulam of Madurai district, holds 24 Guinness World Records. It was after the death of his father in 2008, Narayanan began practicing Taekwondo to divert himself from grief. The training that he started then to divert himself, has made the Guinness World Records history turn the view towards Madurai today.

Yes, this Taekwondo player Narayanan has won 24 Guinness World Records since 2016. The player, after realizing the common interest in karate among the youth and not much on Taekwondo, Narayanan determined to perform unique feats on Taekwondo, hoping that would turn the interest of Youths to focus on it. In the meantime, during last April, Narayanan has created a Guinness world record by smashing 37 concrete stones in one minute, interestingly using only a single foot. Meanwhile, Narayanan also proudly says that this achievement is unprecedented in the Taekwondo game. 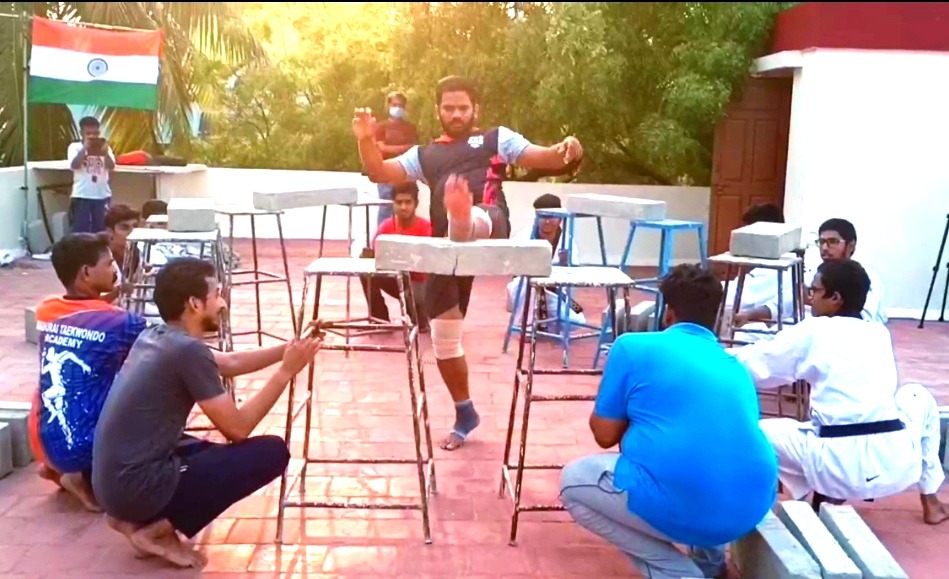 Narayanan proudly said that his achievement is unprecedented in the Taekwondo game.

Speaking about his achievements, Narayanan said “So far I have made achievements like breaking 23 watermelons in one minute, holding 1 kg weight on each hand and did full extension punch, tying 10 kg weight on each leg and kicking 138 times in 3 minutes are the challenges. In addition to these, I had invested my full-time for 6 months of continuous training to achieve breaking of concrete stones in one minute, which was my latest achievement. Following the training, I had severe pain in my foot and could not even walk properly for nearly two months.

“Now I feel protruding to be able to make a historic achievement out of my victory. By taking oneself trained to Taekwondo competitions and performing such feats, one can create a place for oneself in the world of sports and excel in Government jobs under sports reservation and shine as responsible Government Officials", he added. He went on to say that he would like to dedicate one of his last two achievements to Prime Minister Narendra Modi and Tamil Nadu Chief Minister MK Stalin.

Narayanan is currently the President of the Madurai District Taekwondo Association. However, he is confident in performing many more unique feats in the near future. The athletes should commit to increasing India’s participation in the Taekwondo Games at the Olympics and that the Central and the State government should pay more attention to training and guidance, Narayanan demanded.