Catch all the action from day 13 of Asian Games through our live blog.

Catch all the action from day 13 of Asian Games through our live blog.

DAY 12 REVIEW: There was no stopping the gold rush from track-and-field as India exceeded all expectations for its best Asian Games performance in close to seven decades but heartbreak in hockey took some sheen off the country’s sprint past the previous edition’s medal haul on Thursday. The seasoned Jinson Johnson and the women’s 4x400m relay team were the joint stars with their golden show on the final day of the track-and-field competition in which India signed off seven gold, 10 silver and two bronze medals, the country’s best haul since 1951. India surpassed its previous edition’s overall tally of 57 by making it 59 with two more days of competition left. The country also took its gold tally to 13, two more than 2014.

so India have 65 medals now, tied with 2010 for the highest total haul ever at an #AsianGames - and a few more on the cards..

Silver then it is for India after a gritty and determined Japan didn’t allow them to score that second equalizer even till that very last minute chance that India missed. Indian players looked a little off position in the last quarter, while Japan managed to keep ball possession as much as possible. India failed to make a concentrated move, and by the end of it looking frustrated as a result of it. REMINDER: Japan qualified for the Olympics as its hosts automatically, but India DO NOT qualify on the basis of being finalists here. It’s a complex route of qualification tournaments from here to Tokyo sadly.

Full time: India win the Silver medal after losing the final 2-1 against Japan. India had won the Bronze in 2014 Asian Games.

Less than four minutes left and Japan are doing a fantastic job of running down the clock and giving the Indians no chance of taking the attack to them.

Five minutes left in the game and India are looking down and out!

Not some thing the All India Mahila Congress will remember fondly. That's the 2014 relay team who are in the pic for a congratulatory post for the 2018 relay girls

Ten minutes left in the tie here against Japan for India. Can they pull this back and make something out of it? India so far in the final quarter have not been playing well and Japan have dominated the game.

India have another 15 minutes to pull things back in the final.

Some excellent and never-seen-before variation from the Japanese gives them the lead through a penalty corner. The Indians have made more interceptions and it’s been a great quarter otherwise for us, but they need to create PCs and soon!

End of the third quarter: India trail 1-2 against Japan.

GOAL: Japan have used a variation in a PC towards the end of the third quarter and that worked! Motomi scored from the move and India now trail 1-2 with a quarter to go.

Five minutes left in the third quarter, and India have created a couple of panics in the Japan defense, but not enough to find a second goal as yet and edge ahead. India still playing in front of Japan and have not found spaces beyond the Japanese back line.

Five minutes into the third quarter, and not much has changed in terms of how the teams are playing. India continue to loose the ball easily, while Japan have been more comfortable on it. Great interception by Reena produced an opening for India but they could not convert that after a scramble inside the D

In the first two quarters, India were guilty of losing possession easily and cheaply. They will need to sort that out fast.

We are ready for the second half. The Indian team will be aware of the penalty shootouts in the past and will hope to avoid that.

India in the first half have had more shots and the numbers say they have been more attacking than Japan, who have been emphatic and looked dangerous every time they have attacked. Here's a look at some of the stats: 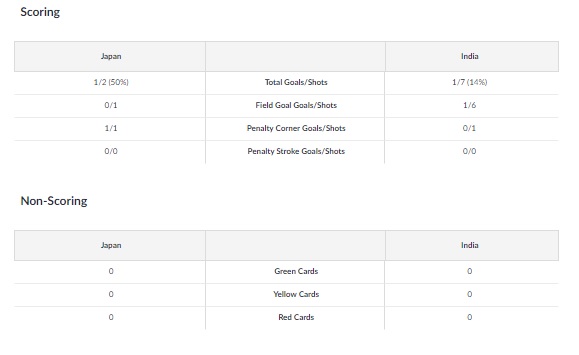 Great counter attack from India finally and Neha Goyal’s deflection equalizer which was desperately needed because it would have been frustrating post half time and the errors would have crept in had they been trailing. Japan’s defence has been rock solid which means India have failed to penetrate a few times. So 1-1 at halftime and tough to pick the better side!

Half Time: India and Japan are locked at 1-1 with half an hour to go in the final.

We are nearing the end of the second quarter in the match and India and Japan are locked 1-1 and in a battle of attrition. Neither looking convincing in attack as yet.

Japan though playing a far more robust and gutsy game against the Indian team in this final. This is not going to be an easy ride even though they have fought back well in the second quarter with the equaliser.

GOAL! India have equalised after Rani Rampal's shot has been deflected in by Neha Goyal. It's 1-1 after that fantastic countera-attack with 5 minutes leftin the quarter.

The Indian attackers have been stitching more passes together as they look to equalise in the final against Japan. Fortunately for Japan though, the play is in front of them and it's easier to deal with as a defending unit in that case. Japan have done well to keep the open spaces to a minimum and make sure India have to work extremely hard to get through for a goal.

Japan finding it easier than India to go through the opposition defences as they look to double their lead. India's defense have been called in to make desperate saves in the last few minutes. India will need to recharge their batteries and find a Plan B

India have started the second quarter looking to attack and the Japanese women are defending deep and in numbers as they look to close the spaces for the Indians.

India probably needed that wake-up call because despite some great passing and speedy hockey, the defense has largely been napping. Japan have already qualified for the Olympics but there’s no drop in intensity from them. Rani should have got that rebound goal at the start, hopefully that won’t cost us

End of the first quarter: India and Japan have both been entertaining in the first 15 minutes but have failed to be decisive in open play. Japan took the lead from a penalty corner and lead 1-0 with three quarters to go.

India try to respond with Vandana shooting on the turn and aiming for the corner. But the shot is well off target and India continue to trail 0-1

GOAL! Right after India's missed PC, Japan have their own penalty corner with less than five minutes to go. And Japan have found the back of the net as Minami poked it in past Savita Punia. Japan lead 1-0

First penalty corner of the game goes to India and Gurjit lets fly from the top of the circle, but the Japanese keeper does enough to keep that out. It's still a tight battle that's locked at 0-0.

Former India captain Viren Rasquinha makes a point that the Indianteam now has become fitter and sharper since the Rio Olympics - which is good and will help.

Johnson, who surprisingly lost the gold to compatriot Manjit Singh in the 800m, more than made up for that blip with a brilliant rally. Johnson clocked 3:44.72sec to claim the top honours ahead of Iran’s Amir Moradi, who turned in a timing of 3:45.62sec, his season’s best effort. And then the 4x400m women’s relay team notched up a fifth successive gold to continue their remarkable dominance of the event. The Indian quartet of Hima Das, M R Poovamma, Saritaben Gayakwad and Vismaya Velluva Koroth clocked 3:28.72sec to claim the gold. The men’s team could not get the top position but pulled off a creditable silver with the quartet of Kunhu Muhammed, Dharunn Ayyasamy, Muhammed Anas and Arokia Rajiv timing 3:01.85sec to finish behind Qatar, which won gold in an Asian record of 3:00.56sec.

Adding a bronze was veteran discus thrower Seema Punia. The 35-year-old cleared a six-year-best of 62.26m for a third-place finish. Punia won a gold in the 2014 edition. Asian champion P U Chitra also won a bronze, in the women’s 1500m race. Chitra entered the race as Asian leader this season but had to settle for a bronze with a timing of 4:12.56 sec. But losing the men’s hockey semifinal to Malaysia came as massive blow for the country, which was not just aiming for a gold but also direct Olympic qualification through a top finish here. The Malaysians handed India a heartbreaking 6-7 loss in sudden death after an exhausting shoot-off. India will play eight-time champions Pakistan in the bronze medal play-off. Pakistan lost 0-1 to Japan in the other semifinals.

Malaysia, who had beaten India in the last-four stage eight years ago at Guangzhou, made their wasteful opponents pay for their mistakes, both in regulation time and shoot-off. Both teams were tied at 2-2 after 60 minutes. In the shoot-off, it was anyone’s game and Malaysia handled the nerves better to make their second Asiad final. India, who had scored a record 76 goals in the group stage, were left stunned after S V Sunil missed his attempt in the sudden death. Only Akashdeep and Harmanpreet scored in the first five shots of the shoot-off while Manpreet Singh, Dilpreet Singh and Sunil faltered. There was no end to the disappointments in sports like volleyball, sepaktakraw where Indians continued to falter and failed to find any wins.

In squash, the Indian women’s team lost the all-important match against Hong Kong 1-2 to finish second in Group B, resulting in a tougher semifinal opponent in defending champions Malaysia. Senior players Dipika Pallikal and Joshna Chinappa lost their matches against Joey Chan and Annie Au, 1-3 and 0-3, respectively. Sunayna Kuruvilla, who is Pallikal’s cousin, kept India in the hunt with a fighting win over Tze Lok Ho in the second singles. Kuruvilla, making her Games debut, was trailing 0-2 in the match and 7-10 in the fifth and deciding game but she never gave up despite some debatable calls by the referee. She fought till the last point for the biggest win of her career, prevailing 5-11, 13-15, 11-6, 11-9, 14-12. In table tennis, Commonwealth Games gold medal winning paddlers A Sharath Kamal and Manika Batra advanced to the pre-quarterfinals of the singles events. The two had cinched a historic mixed doubles bronze on Wednesday.