Catch all the live action from day three of the 18th Asian Games through our live blog.

Latest Update: On Day 3, India began the day with third Gold medal as 16-year-old Saurabh Chaudhary set a Games record in the 10m Air Pistol, with Abhishek Verma adding a second medal with Bronze. Right after that the veteran Sanjeev Rajput has bagged the Silver medal in the Men's 50m 3 Position Rifle Event. Also, India lost to Thailand in the semi-final and settled for Bronze in the Sepak Takraw in Men's Regu. In wrestling, Diyva Kakran won the Bronze medal in the 68 kg women's freestyle. In swimming, India's Virdhawal Khade missed out on Bronze by 0.01 seconds.

Wushu: Another weight category, another medal assured for India. Narender Grewal has qualified into the semi-final of the 65 kg category by beating Akhmal Rakhimov 2-0

Hockey: That's it folks, Indian women's team have recorded one of their biggest wins in hockey as they blank Kazakhstan 21-0.

Hockey: Meanwhile, the Indian women's hockey team are routing Kazakhstan as they are currently leading 21-0 with 5 minutes to be played in the final quarter.

Wushu: India have now been assured of their third medal in wushu after Surya Pratap beat Philippines' Jean Claude Saclag 2-0 in the quarter finals of the 60 KG Sanda category. Hockey: India are now 9-0 up in the match against Kazakhstan and we are still in the third quarter. The Women in Blue have bettered their record of 8 goal that they scored in the first match against Indonesia.

Wushu: Another medal has been assured in Wushu after Santosh Kumar beat Thailand’s Paokrathik Phithak to enter the semi-final of the 56 KG category. This is India's second assured medal in Wushu after Naorem Devi. Hockey: The Indian women's team have added two more goals to their tally and they are now 7-0 up just five minutes inside the second quarter.

Hockey: Indian women's team are on fire once today as well. After their 8-0 win in their first match, they are now taking apart Kazakhstan in their second match. The Women in Blue are already up 5-0 and we are still in the first quarter.

Wushu: India have been assured of a medal in Wushu after Naorem Devi beat Pakistan’s Mubashra 0-2 to move into the semi-final of the Women's Sanda 60kg. 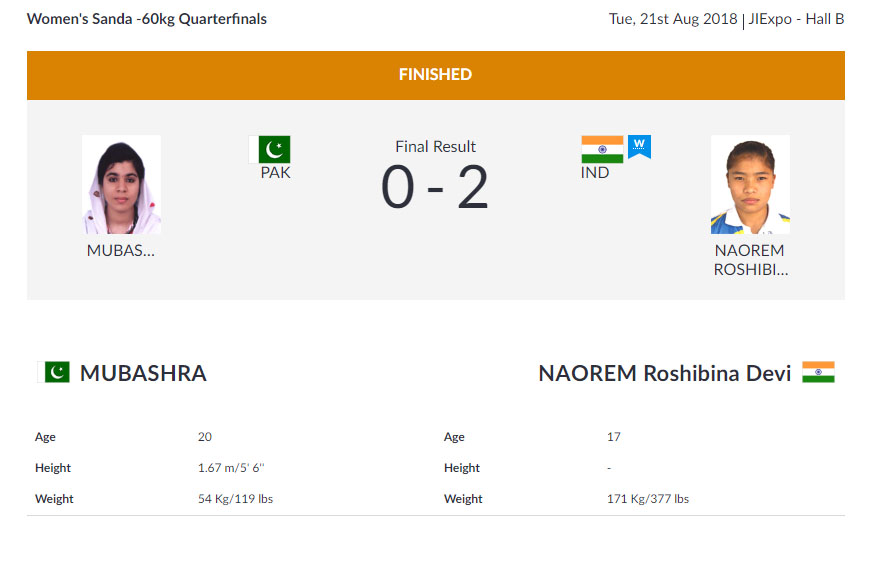 Artistic Gymnastic: The Indian team have qualified for the team championship final after finishing seventh in the event (top-8 qualifies). India's final score was 144.300. The final will be held tomorrow (Wednesday) at around 4:30 PM.

Tennis: Setback for India as mixed doubles pair of Divij Sharan and Karman Thandi lost their Round of 16 match 1-2 to Kazakhstan's of Danilia and Nedovyesov.

Kazakhstan is expected to give more competition than Indonesia did in the opening match in the women’s hockey pool game. The defence is likely to have a bit more work to do. But some of the players have done well against the Kazakhs. Current captain Rani has a hat-trick against them from the 2010 Asian Games. And in last year’s Asia Cup Q/F, Gurjit Kaur scored a hat-trick against them. India is the highest ranked side in the competition, so they’d want to make use of opportunity at hand to iron out the littlest of creases.

Hockey: The Indian women's hockey team will be in action later in the day and they will be up against Kazakhstan. The Women's team are currently at the top of Pool B, having won their first match by a massive margin of 8-0 over Indonesia.

Her medal is a testament to her relentless hard work & determination. Exceptional performance! #IndiatAtAsianGames pic.twitter.com/dL4UsBlxUz

Wrestling: Divya Kakran become the second Indian women's wrestler to win a medal at the Asian Games 2018. She destroyed her opponent 10-0 and won on technical superiority. Wrestling: Diyva Kakran has taken full control of her bronze medal match in the 68kg women's freestyle wrestling. Her Chinese Taipei opponent is reeling under the pressure now. Kakran is leaidng 4-0.

Vault queen Dipa will not feature in the individual final. She’s finished behind Pranati Nayak and Aruna Reddy. Only two gymnasts from one country are allowed in the final, and the other two girls also need to wait for their qualification. Dipa was desperate to make a mark here, but if the larger picture is to be considered, you could be choose to be positive. The girls all train together in Delhi, and have made progress after Dipa’s Olympics 4th place finish inspired them further. Aruna won a World Cup bronze earlier this year.

Tennis: In mixed doubles, Indian pair of Rohan Bopanna and Ankita Raina beat their Korean counterpart Lee Jeamoon and Nari Kim in a thriller. The Indian duo won their Round of 32 match 6-3, 2-6, 11-9.

India’s women gymnasts are in action for the first time at the Games, spearheaded of course, by Dipa Karmakar. The team has the talented Aruna Reddy too, alongside Pranati Das, Pranati Nayak, and Mandira Chowdhury. No Produnova from Dipa this time. But she’s been working on a 360 degree Handspring that involves one twisted rotation. Dipa has been working hard for the event, but in between has also managed to make a quick visit home to write her MA exams. Talk about multi-tasking!

4:56 pm (IST)
Words of encouragement from the PM himself for the 16-year-old history-maker.

16-year old Saurabh Chaudhary illustrates the potential and prowess our youth is blessed with. This exceptional youngster brings home a Gold in the Men’s 10m Air Pistol event at the @asiangames2018. Congratulations to him! #AsianGames2018 pic.twitter.com/FHmF6TM8tK

Virdhawal Khade has missed a bronze by 1/100th of a second. That’s harsh. Khade had to take a break from swimming for close to 2 years due to a troubled knee. There’s little he gets in terms of government help because of being out of action. Which is why an Asian Games medal would’ve been hugely helpful for him. But bettering his own national record is a small step towards getting back into the minds of those who matter.

Not only did they become India's 1st team in the sport to reach the Semi-finals of the Team Regu Event at #ASIANGAMES2018 and also winning a🥉medal. FANTASTIC TEAM EFFORT by the boys! #IndiaAtAsianGames pic.twitter.com/qCqV6OhR0g

Swimming: Men’s 50m Freestyle final, India’s Virdhawal Vikram Khade has finished 4th with a time 22.47. He had qualified for the final with a time of 22.43 which is a National Record. Here are the final standings from the pool: Kabaddi: The Indian men beat Thailand 49-30 in their final Group match to register three wins out of four.

Archery: At the end of both the women’s and men’s recurve ranking rounds, India are placed eighth in the recurve mixed team rankings, with a total of 1309. Korea scored a world record of 1364. The Indian men's Sepak Takraw team may not have had any achievements of note in the past, but it has created history at the Asian Games by winning the bronze medal in the men's team regu on Tuesday.

Tennis: In the mixed doubles, India's pair of Rohan Bopanna and Ankita Raina have won the first set against South Korea's Kim Nari and Lee Jeamoon 6-3.

India have bagged four medals, with three from shooting. Saurabh Chaudhary (Gold), Abhishek Verma (Bronze), Sanjeev Rajput (Silver) and the Bronze for Indian men's team in Sepak Takraw's Regu event. Here's a look at the total tally for us:

Tennis: In the Mixed doubles Round of 32 match-up, India's pair of Rohan Bopanna and Ankita Raina are up against South Korea's Kim Nari and Lee Jeamoon. It’s 2-1 to Korea in the first set after they broke the Ankita Raina’s serve.


DAY 2 REVIEW: Vinesh Phogat expectedly delivered a historic wrestling gold, the shooters picked up momentum with a couple of silver medals and an unexpected podium finish was assured in Sepak Takraw on a fairly good day for India at the 18th Asian Games here. Adding to the cheer was the defending gold-medallist men's team's 17-0 hammering of hosts Indonesia in its pool A opener.

There were disappointments too with an Olympic-medallist, wrestler Sakshi Malik, finishing without a medal for the second day running, seven-time gold-winner men's kabaddi team losing for the first time in its Games' history and both the men's and women's badminton teams getting knocked out of medal hunt. However, there was plenty to celebrate with Vinesh's gold being the biggest reason of them all. It was India's first gold since women's wrestling was introduced in the Games in 2002 Busan edition.

The Haryana-grappler, who will turn 24 this Saturday, gave herself an early birthday present with a performance that was all style, brushing aside her rivals with remarkable ease in the 50kg category. "I had targeted gold. I had 3-4 silvers at the Asian level and I was determined to win a gold today. My body responded well because I had trained well and God was also kind. So everything mixed up well for me today," a teary-eyed Vinesh said after the triumph.

At the shooting ranges of Palembang, Deepak Kumar (10m air rifle) and Lakshay Sheoran (men's trap) added the silver touch, while the men's sepak takraw team created a flutter by advancing to the semifinals away from the spotlight. It was a case of breakthrough medals for both Deepak and Lakshay, shooters with contrasting career paths. The 33-year-old Deepak did not mind the long wait for a major medal, 14 years after he picked up the sport. Lakshay, on the other hand, picked up the gun only four years ago as a teenager and at 20, is now a silver-medallist at the Asiad, equalling the feat achieved by former world champion Manavjit Singh Sandhu at the 2006 Doha edition.

There was good news coming in for India in the rowing competition as well. Dushyant Chauhan and the Indian men's quadruple sculls team finished first in their respective heats to reach the finals. Dushyant, who won a bronze at the single sculls in the Incheon Games four years ago, clocked 7:43.08 to emerge the fastest in heat 1 and second overall. The quartet of Sawarn Singh, Dattu Baban Bhokanal, Om Prakash and Sukhmeet Singh qualified comfortably for the final, clocking 6:15.18 seconds. They finished the fastest overall. On the tennis court, India's singles specialists, including second seed Ramkumar Ramanathan and Ankita Raina, made smooth starts, also in Palembang. Joining them was Karman Kaur Thandi, who won comfortably to make the next round.

It was Jakarta which gave India the biggest moment of the day in Vinesh's gold but it was also Jakarta where some major disappointments came for the country. The biggest perhaps was Sakshi's medal-less campaign, which ended with an embarrassing loss on Technical Superiority to North Korea's Sim Jong Rim. The final scoreline read 2-12 and added another big-ticket disappointment to Sakshi's CV after the bronze in a lacklustre Commonwealth Games field earlier this year. Similar was the story of the star-studded badminton teams, both of which went out in the quarterfinal stage. Olympic silver-medallist P V Sindhu and H S Prannoy shone bright but couldn't get enough support from the rest as India lost in the women's and men's team events respectively.

After the women's team went down 1-3 to top seeds Japan early in the day, the men's team put up a spirited effort before losing 1-3 to hosts Indonesia, knocking them out of medal contention. A shock loss to Korea gave the seemingly invincible kabaddi team a reality check but there medal hopes remain alive as it was a group A game. India lost 23-24 to South Korea, who won the bronze medal at the Incheon Games four years ago, in a match that went down to the wire. The Indian gymnastics contingent also ensured a disappointing day in office as they failed to qualify for the finals in the men's team event, finishing ninth with a score of 229.950, 0.35 points behind Iran. The men's team comprised 2010 bronze-medallist Ashish Kumar, Rakesh Patra, Gaurav Kumar, Yogeswar Singh and Siddharth Verma.

At the Aquatics centre, India made the finals of the 4x200m finals but the quartet of Shrihari Natraj, Saurabh Sangvekar, Avinash Mani and Neel Roy ended 7th overall with a timing of 31.90sec.