Catch all the action from Day 7 of the Asian Games 2018 on the News18Sports' Live Blog.

Day 6 Round Up: Tenacious rowers fought through exhaustion to redeem themselves and the first-time pairing of Rohan Bopanna and Divij Sharan delivered a tennis gold but India's most successful day at the 18th Asian Games was not without its share of heartbreak. The overall tally of six gold, five silver and 14 bronze medals at the end of day six put the country in 10th spot in the table with China leading the pack by quite a distance, having already crossed the 100-mark. There was no shooting gold to be celebrated today but Heena Sidhu's 10m air pistol bronze was creditable enough even as 16-year-old sensation Manu Bhaker once again cracked in the final after a good qualification round.

Hockey: Indian women's team survived a few early scared to beat Korea 4-1 to continue their impressive form at the Games going. After the men's did it yesterday, the women's team have now won all three matches comfortably at the Games.

Men's 400: Muhammad Anas Yahiya has secured a place in the final of the 400m event after winning his semi-final with a time of 45.3 sec. Japan's Julian Walsh also qualifies for the final.

Women's 400m: Hima Das has also qualified for the finale with the second best timing of the day so far. Hima's 51.00 seconds were bettered only by Salwa Naser who set a games record in the heat with 50.86 sec.

GOLD: That's it folks, India have won their first gold medal of the day courtesy of shot putter Tejinderpal Singh Toor. He set the Games record with a stunning throw of 20.75m. He is currently running on the circuit in jubilation, holding the Indian flag.

Shot Put: Tenjinderpal Singh Toor is on fire as he sets the Games Record with a stunning 20.75m throw. He has completely demolished the opposition here and he is en route of winning the gold medal.

@Tajinder_Singh3 throws 19.96m again in fourth attempt, he is in lead #AsianGames2018 He did 19.96m in his first attempt, Gold 🤞it should be. pic.twitter.com/laLjZtNVok

Shot Put: Tejinderpal Singh Toor has once again thrown 19.96m in his fourth attempt. He threw the same in his first attempt. Toor has maintained his position at the top since his first throw and he is likely to take the top spot when the event ends.

Hockey: At half-time, the Indian women's team are locked at 1-1 against Korea and easily, they have been the toughest opponent that the Women in Blue have faced so far.

Hockey: After the end of first quarter, the Indian women's team are locked at 0-0 by Korea. This the toughest opponent that the Women in Blue have faced so far in the competition.

Shot Put: India's Tejinderpal Toor is currently leading the list with a throw of 19.96m. China's Liu Yang is second with 19.42,m. There results are after the first attempt in the event.

Women's 100m: Dutee Chand has issued an early warning for the others as she qualifiies for the semi-final in stunning style. Chand's qualification time was 11.38. 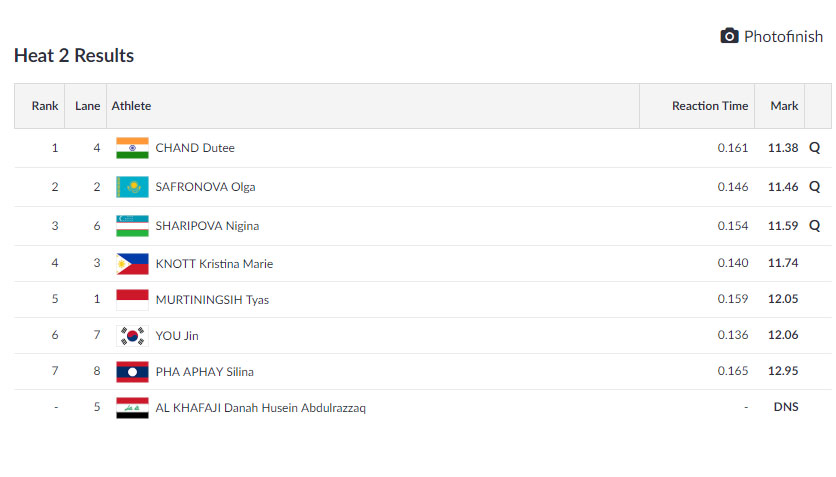 Women's Hammer Throw: India's Sarita Singh finishes fifth and fails to win a medal for India. She threw a commendable 62.03 but it wasn't enough in the end for her to win a medal. Women's Hammer Throw: After four attempts, Sarita Singh is now placed at the number fourth spot on the table. Sarita's highest throw today has been 62.03.

Long Jump: Indian athlete Sreeshankar has made it into the final on the back of a good performance in the qualifiers. He qualified for the finals in his first jump itself. Sreeshankar put this performance despite things not in great shape back home in Kerala. But he was forced by his mother to compete in the Asian Games do the country proud. The final will now be played tomorrow.

Suprita Das, Senior Journalist: Quietest day of the games so far for India. Barring Sindhu-Saina’s dominant wins and boxer Pavitra’s knock out show against her Pakistani counterpart, it’s been quite low key. All the squash singles players lost their semis. Let’s look at track and field to light up the evening session. Tejinder Toor in the shot put is a medal contender. And of course, Md Anas and Hima Das in their 400m qualifications.

Squash: Heartbreak for Saurav Ghosal as after leading 2-0, he has succumbed to a 2-3 defeat to Hong Kong's Chung Ming. Ghosal had won the silver medal last time in Incheon 2014, however, this time he has to be content with just bronze.

Squash: Extraordinary comeback from Chung Ming as he has forced the match into the decider now by winning back to back games. The match is now locked at 2-2. The winner of this game will play the gold medal match in men's singles.

Squash: Chung Ming has hit back strongly now as he takes the third game to make it 1-2. Ghosal still needs one game to still the match and secure a place in the final. 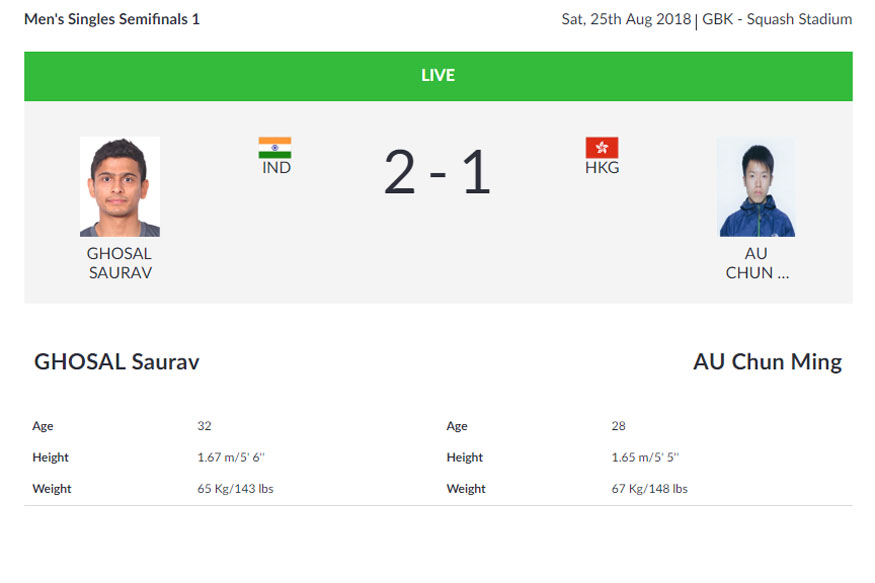 Squash: Indian squash players Saurav Ghoshal is on the verge of securing a place in the final as he is currently 2-0 up against his Hong Kong counterpart Chung Ming.

Squash: Joshna Chinappa has also lost her squash semi-final clash and she will have to settle for Bronze. Chinappa lost to Malaysia’s Sivasangari Subramaniam  in the final four clash. .@P9Ashwini/@sikkireddy narrowly miss out the semi-final berth at the #AsianGames2018 after an unfortunate 11-21, 22-24 loss to China. Great attitude from our girls; put their heart and soul into the tie though the result didn't favour them. ! #IndiaAtAsianGames pic.twitter.com/fPBNuNgMA4

Catch all the action of the seventh day of the Asian Games 2018.


Among the disappointments, kabaddi once again formed the core of India's woes. Like its male counterpart, the defending champion Indian women's team too lost to Iran, albeit in the final, to collect a better medal compared to men, who ended with a bronze on Thursday. The humiliation of finishing without gold in a sport that is indigenous to India would have been hard to take had it not been for the stout-hearted effort of the country's rowers and a thoroughly clinical performance from Bopanna and Sharan. The rowers, all of whom belong to the Indian army, showed a soldier's spirit to come back from the disaster that was yesterday when none of them found the podium despite being in contention for four medals.

The team comprising Sawarn Singh, Dattu Bhokanal, Om Prakash and Sukhmeet Singh clocked 6:17.13 to win the gold medal in men's quadruple sculls. It was an especially special moment for Bhokanal after yesterday's forgettable show, when he had failed to complete his event. Before landing the top prize, India bagged two bronze medals in the sport through Rohit Kumar and Bhagwan Singh in lightweight double sculls after Dushyant Chauhan started the day with a third-place finish in lightweight single sculls.

Dushyant had to be stretchered off the medal ceremony after just about standing through it and throwing up later. Rower Jagvir Singh too needed medical attention right after the race and he could not even breathe properly. "Yesterday (Thursday) we had a bad day but soldiers never give up. I told my teammates that we will go for the gold and we will give it all. It was about karo ya maro (do or die). And we did it," Sawarn, senior most member of the gold-winning quadruple sculls team, said. If rowers were all grit, there was sublime coordination on display in the men's doubles final featuring Bopanna and Sharan against Aleksander Bublik and Denis Yevseyev of Kazakhstan.

The Indians came out trumps 6-3 6-4 in 52 minutes to claim the men's doubles top prize, which has now gone to India for a fifth time. "This is really special for me. This medal especially goes to the people of Coorg. They are going through tough times (after the floods) and in Kerala also. Hope this can cheer them up," said Bopanna. The lone Indian in fray in the men's singles event, Prajnesh Gunneswaran, settled for a bronze after losing 2-6 2-6 to Uzbekistan's Denis Istomin in a semifinal that was much more competitive than what the score-line might suggest.

Medals were also assured in squash where Dipika Pallikal, Joshna Chinappa and Saurav Ghosal advanced to respective singles semifinals with facile wins. Aadil Bedi kept India in the medal hunt in golf, holding the third position individually and helping the team be second at the halfway mark. The men's hockey team remained unbeaten, mauling Japan 8-0 in its third preliminary match to stay on course for an expected gold and Olympic qualification. But then in Jakarta, it was another day of disbelief for Indian kabaddi as Iran became their nightmare for the second day running. This time, it was the women at the receiving end in an exciting final. There were shocked faces in the Indian camp once again as the country came to terms with Iran's rise as the new powerhouse of kabaddi, a medal in which was taken for granted at the Asiad every four years.

Not to mention the continuing poor show in archery, where the ones in recurve signed off without medals in the individual events. Those in compound are still in fray in individual competitions but aren't exactly the favourites going by current form. There was bad news in badminton with top shuttlers Kidambi Srikanth and H S Prannoy getting knocked out of the Games after shock defeats in the second round ended India's campaign in the men's singles competition. After Srikanth lost 21-23 19-21 to Wong Wing Ki Vincent of Hong Kong, Prannoy followed suit going down 12-21 21-15 15-21 to Thailand's Kantaphon Wangcharoen. In gymnastics, Dipa Karmakar finished fifth in balancing beam, her jittery comeback from a knee injury not quite going as planned at least at the ongoing Games here.

The swimmers signed off without a medal, the only heartening aspect of the campaign being Srihari Natraj and Virdhawal Khade bettering a few national marks. The boxers began their campaign too and it was day of mixed results for them. Veteran Manoj Kumar (69kg) eased into the pre-quarters but Commonwealth Games gold-medallist Gaurav Solanki (52kg) went out with a stunning opening-round loss. Manoj prevailed 5-0 over Bhutan's Sangay Wangdi to make the last-16 stage and set up a clash with Kyrgyzstan's Abdurakhman Abdurakhmanov. However, Solanki was beaten in a unanimous verdict by Japan's Ryomei Tanaka, the 21-year-old India's defence all over the place against the southpaw.