Live Updates: The 18th Asian Games that will be jointly hosted by two cities for the first time ever, kicks off on Sunday, with the opening ceremony at the Gelora Bung Karno Main Stadium in Jakarta.

Meanwhile, the Asian Games flame has been lit by Susi Susanti, Indonesia's Gold Medallist shuttler from the 1992 Barcelona Olympics. That's it from today. Do join us at 8am on Sunday as an action packed day awaits.

One the biggest attractions for India at the Games will be Sushil Kumar. He hasn't been in the best of form and had recently lost a bout too. He reacted to the loss and said, "So what. There will be defeats and victories in sportsman's life. Real athlete is the one who stands up after defeat, prepares harder and come back. Real athlete is one who takes the mat after winning also. I am trying to do the same. I have prepared well for the Asian Games but I am not out there to prove anything. Proving yourself is not sportsmanship," Sushil, who will compete in the 74kg category in Jakarta, said.

World sports bodies led by the IOC and FIFA suspended Kuwait in October 2015 for a second time since 2010 for political interference in sport. The IOC said that in reinstating Kuwait provisionally that it "acknowledged the progress" and the "positive discussions with the Government of Kuwait". Al Musallam said Kuwait did not have much time to prove it was trying to meet IOC requirements. "We are going to review the situation with the IOC on October 3 and 4 to see if any of the agreement has been implemented on the ground, or if there is nothing," said Al Musallam. "We really hope this thing will be finished."

But the IOC said that despite its "gesture of goodwill" the reasons for its original suspension remained valid. "This is a world record for government interference in the Olympic movement, no country is like this," OCA director general Husain Al Musallam told AFP after an executive board meeting discussed the matter in Jakarta.

Meanwhile, Kuwait was warned by the Olympic Council of Asia (OCA) on Saturday to stop its "world record" of government interference in sport or face being exiled for a third time. The International Olympic Committee (IOC) this week provisionally lifted its ban on Kuwait, allowing the Gulf state's athletes to march under their own flag at Saturday's Asian Games opening ceremony in Jakarta.

The stars have arrived! ⭐

🔁 RT if this moment gave you goosebumps. #SPNSports #Inauguration pic.twitter.com/koy8dTHlAd

For India the action starts on Sunday. The main attraction of the will be in shooting and wrestling. Here are the medal events and timings for the same:

The Indonesian flag goes up. That marks the start of the 18th Asian Games. This must be a proud moment for a nation who's hosting the prestigious games only for the second time. The first occasion was way back in 1962.

With Indonesia entering the stage, this marks the beginning of the #OpeningAG2018 ! Watch it live on all national tv channels and https://t.co/qVN2hgr1b3 #AsianGames2018 pic.twitter.com/G5M2db6IsR

Time for a performance by Indonesian singing sensation Via Vallen. She has brought the crowd on its feet as the Indonesian contingent surrounds her.

6:25 pm (IST)
This is what happened when the Indonesian contingent made their way to the stadium.

The loudest cheer is reserved for host nation Indonesia. The President gives a standing ovation to the contingent. These are great scenes that are unfolding here at the moment.

And the most awaited moment is here...

The 802 strong Indian contingent walks into the Gelora Bung Karno Main Stadium as the 18th edition of the #AsianGames2018 takes off amidst a grand ceremony. What an incredible moment! #IndiaontheRise #IndiaAtAsianGames pic.twitter.com/LzIJj3lmIQ

Big news coming in from Iran and Iraq as for the very first time they have women as their flag-bearers in the opening ceremony. For Iran, shooter Elaheh Ahmadi got the top honour of leading the contingent.

One of the biggest attraction of the day is North Korea and South Korea coming out together as one team. They'd be taking part together in some of the team events together.

This is how India made an entry into the Gelora Bung Karno Stadium for the opening ceremony.

INDIA it is. To the dreams of seeing the 🇮🇳 fly high & hearing 'Jan-Gan-Man' playing in the stadiums, here's to everything our athletes are made of. #AsianGames2018! #AsianGamesOCA2018 #TeamIndia pic.twitter.com/sTEbyT47kW

Opening Ceremony at a glance!

Dramatic entry by the Indonesian🇮🇩 Premier and scintillating display of rich cultural heritage-is how the 18th edition of the #AsianGames2018 took off in Jakarta! ! #IndiaontheRise #IndiaAtAsianGames pic.twitter.com/aEL5OvWJb9

Here comes the Indian contingent led by javelin thrower Neeraj Chopra. What a proud moment for the 20-year-old Haryana boy who burst on to the scene by winning the junior World Championships gold in 2016.

We have moved to China now. Once again they will look to be among the medals and finish on top of the medals table, unchallenged. They have sent 845 members to the games. Expect a gold rush from them.

The march past has started and first up is the war torn nation of Afghanistan. They'll have over 100 athletes participating in the games. Just before the start of the games they had made an appeal to the the Indians to support sport in their country like the way they have supported cricket.

And the opening ceremony gets underway. The performances have begun in the presence of Indonesian President Joko Widodo. Post the performances the march past of the 45 participating nations will begin.

Images on social media of Indian athletes gearing up for the opening ceremony are pouring in. The latest one is India's quarter-mile sensation Hima Das. 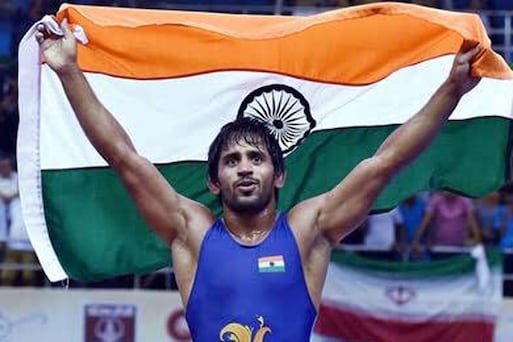 In Incheon, it was Yogeshwar Dutt who won gold, but this time around it's his protégé, Bajrang Punia, who's been tagged as a favourite to win the yellow metal in the 65 kg category. Indian shooters suffered a major setback when organisers of the 18th Asian Games trimmed several of their events for the competition in Jakarta-Palembang.

We are just minutes away from the start of the opening ceremony. Asian Games 2018 could be a good indicator of how our Indian players will perform in the 2020 Tokyo Olympics. Let's keep our fingers crossed.

Legendary cricketer Sachin Tendulkar too sent his best wishes to the Indian contingent. He tweeted:

The #AsianGames2018 are here. The best way we can support our athletes representing India 🇮🇳 is to watch them do what they do best. Let’s show them our true mettle and with pride bring home some metal, guys! 🏅🥈🥉

The Indian boxing contingent departed the country high on confidence, with veteran boxer Vikas Krishnan calling it one of the best contingents ever at the send-off ceremony. The mood in the camp looks good too, eh?

The three Indian🇮🇳 women boxers playing their first ever Asian Games are all kicked for the Opening Ceremony of the #AsianGames2018 #PunchMeinHaiDum #BoxtoGlory pic.twitter.com/GD53ukSI5F

After the usual confusion that precedes the departure of an Indian contingent for a big sports event, aren't we glad that that we can finally get on with the games? Indian Javelin thrower Neeraj Chopra will be India's flag bearer at the opening ceremony. Looks like he's certainly looking forward to the games!

Off to Asian Games pic.twitter.com/bTTEA1DCWi

Hello and welcome to our live coverage of the opening ceremony of the 2018 Asian Games! It is the first time that the Asian Games will be held across two cities (Jakarta and Palembang), and the Indian contingent will be out in full force at the opening ceremony, leading up to the action that starts tomorrow. Stay tuned for continuous updates.

Catch all the updates of the Asian Games 2018 opening ceremony through our live blog.


10,000 athletes and officials from 45 nations will compete in 40 disciplines in the Games that will be held between August 18 - September 2 in the twin venues of Jakarta and Palembang. The parade of athletes is likely to begin around 6.15 PM IST, with javelin thrower Neeraj Chopra as the flag bearer of the Indian contingent. The opening ceremony is expected to feature popular Indonesian singers Anggun, Raisa, Tulus, Edo Kondologit, Putri Ayu and Via Vallen. The ceremony stage is believed to have a mountain as its backdrop, accompanied by plants and flowers unique to the host nation. The stage, made by Indonesian artists, will be where 4000 dancers will be performing.

572 Indian athletes, about 200 of who are aged 18-23, will aim to give the country a better finish than the 2014 edition of the Games in Incheon where they finished eighth with 57 medals in all. India’s build up to the competition has been messy to say the least, but the performance of youngsters such as Neeraj Chopra, Hima Das and Manu Bhaker gives India plenty of hope. Medals are expected from shooting and wrestling even though the competition is as good as the Olympics or the World Championships. That apart, the track and field stars, badminton players and hockey teams would hope to find themselves on the podium.

The competition won’t be as easy as the Commonwealth Games in Gold Coast earlier this year where India had it second best showing, but it certainly threw up new talent across disciplines who have shown the potential to beat the best in Asia.