Catch all the live updates from the 2018 Asian Games in Jakarta and Palembang on News18Sports' Live blog.

Catch all the live updates from the 2018 Asian Games in Jakarta and Palembang on News18Sports' Live blog.

19:51 (IST)
Meanwhile, the Athletics Federation of India have filed an official protest for the disqualification of 10,000m bronze medal winner.

This is how close it was right at the end but Dutee kept her cool and won the silver. 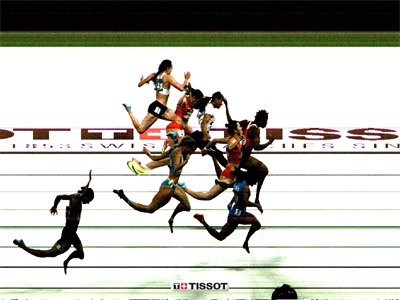 Women's 100m: Dutee Chand is flying the Indian flag high after taking the second spot in the event. Dutee's timing was 11.32, which was just 0.02 seconds behind Bahrain's Edidiong who took the gold medal. Dutee wins the silver and takes selfies with fans to celebrate her stunning win.

Women's 100m: India's Dutee Chand's event is next up and she will be competing against the best Asian athtletes in the event. Dutee is placed at the seventh running spot. She qualified for the final with a timing of 11.43.

Men's Long Jump: Heartbreak for India's Sreeshankar as he finishes outside the medal place. The youngsters last two jump was invalid and finishes with his best jump of 7.9m. China's Jianan Wang takes the gold medal.

One more medal from Tracks....G Lakshmanan wins Bronze medal in Men's 10000m with the timing of 29:44.91 at #AsianGames2018 Third medal of the day from #TeamIndiaAthletics

10,000m: Lakhmanan Govindan has created history has he wins the bronze medal in the men's 10,000m. Bahrain's Hassan and Abrahan finish 1 and 2.

Hockey: Indian team have continued their good run at the Games as they make it four out of four. India beat Korea in their latest match and they won it by 5-3. This was undoubtedly one of their toughest matches as before this match, they hadn't event conceded a goal. Also, they have qualified for the semi-final courtesy of this win.

Table tennis: After Manika Batra put India in the lead in the Women’s team event against Iran in their final match-up of the day, Ayhika Mukherjee has lost to Neda Shahsavari in the second game with a score of 10-12, 11-9, 9-11, 11-4, 5-11. The contest is tied at 1-1 with Mouma Das playing an all-important third game of the tie against Maryem Samet.

Men’s Long Jump final: India’s Sreeshankar has bettered his performance from the first jump and he stands on third with a jump of 7.95m. The leader at the moment is Jianan Wang with a jump of 8.24m. Silver for Anas too. The belief in India’s quarter milers at these Games has been terrific. You can see the body language is different, and that translates into medal winning performances. Hima and Anas will give us plenty of reasons to cheer about in years to come. 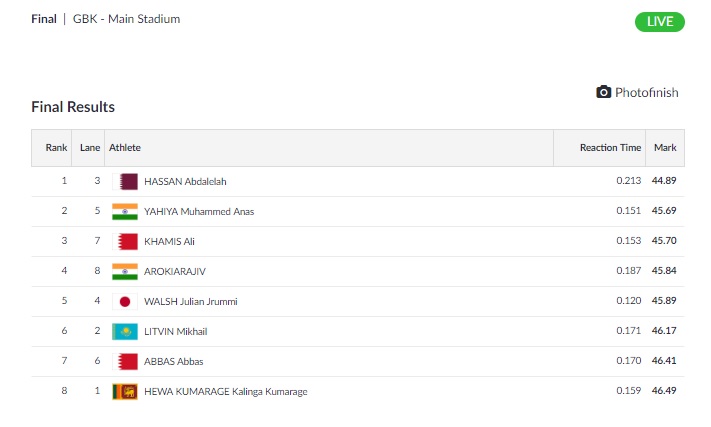 Yet another NR broken by Hima who finishes second behind the stand out performer Salma Naser. Das has age on her side, and can only improve with experience. India needs to preserve this talent!

Hima Das trails Salwa Naser by a fair bit on the home stretch but she wins women's 400m silver medal with a National record time of 50.79 seconds, the first sub-51 by an Indian. #AsianGames2018 #Athletics Nirmala finished fourth in 52.96. pic.twitter.com/pQawH31oiq

Men's 400 final: India's Muhammed Anas and Rajiv Arokiya are in the fray for the medals in the final. Here is the starting list: The Women's 400m final is about to start and India are represented by the young and daring speed machine Hima Das and Nirmla Sheoran in the final. The favourite along with Hima is Salwa Naser, who broke the Games record in the qualifiers. Here is the start list: 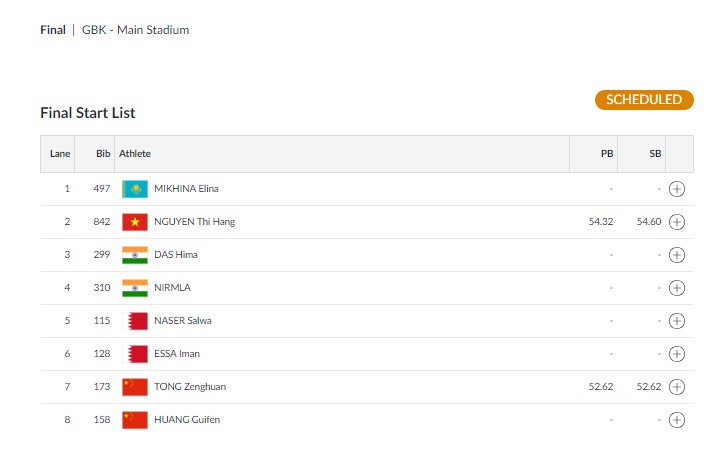 KP Mohan, who has covered several international meets including the Olympics, Asian Games, World Championships and Asian Championships for The Hindu, has this to say about wonder girl Hima Das in his blog.

The Hima Das vs Salma Naser duel in the women’s 400m would be worth waiting for. Naser has remained unbeaten this season through six races before being beaten in Monaco by Olympic champion Shaunae Miller-Uibo of the Bahamas. But Naser clocked a personal best of 49.08s there, a national record.

Having caught the attention of the Indian public, unfamiliar to success of our athletes at the global level, with her stunning display in the World Under-20 championships at Tampere, Finland, in July, Hima would be under pressure to live up to her new tag of the ‘unbeatable’ athlete over the final 80 metres of a 400m race. It would be the biggest shock of the Games if the diminutive Naser is beaten by the 18-year-old Indian who has a best of 51.13s.

Hima’s progress in less than a year has left many baffled. It would be wise to wait for a few more years to see where the Assam girl could be headed. She’s scheduled to compete in the 200m also in Jakarta though there she might find the going tougher than in the longer event.

REMINDER! The Women's 100m final featuring India's Dutee Chand is slated to take place in a couple of hours from now. Here's the start list: Men's long jump: India's Sreeshankar has had his first go in the final and has jumped 7.76m. China's Yaoguang Zhang currently leads with a Games record with a jump of 8.15m. Sreeshankar is currently second on the standings, but mind you not everyone has had their first jump yet.

Hockey: The Indian men's team continue to dominate the South Korean side and hold a 3-0 lead at the half time stage in their penultimate group match.

Women's 100m final: Dutee Chand will be in action and in the fray for a medal later today evening. The final is at 7:40pm IST. Stay tuned!

Men's Long Jump Final: India's Sreeshankar will be in action very soon with 11 other champion athletes. Here is the starting list: Women's 100 Semi-final 2: China's Yongli Wei takes the top spot with a time of 11.29 seconds. Here are the rest of the timings from the second semi-final In the medal standings, India were placed eighth with a compilation of seven gold, five silver and 17 bronze.

Toor, the season's leader, smashed the Games record and the national record to claim the top prize, something that was expected of him. The 23-year-old was heads and shoulders above the field, throwing the iron ball to 20.75m to better the six-year-old national record of 20.69m in the name of Om Prakash Karhana.

The Indian's domination can be gauged from the fact that silver-medallist, China's Liu Yang's best throw was 19.52m.

The athletics campaign was, in fact, off to a very good start in overall analysis with strong medal hopes such as Muhammed Anas (men's 400m), Arokia Rajiv (men's 400m), Hima Das (women's 400m), Nirmala Sheoran (women's 400m) advancing to the finals with strong showing in heats as well as semis races. Das also registered a new national record in 400m, completing her run in 51.00 seconds.

Dutee Chand (women's 100m) made the semifinals by winning her heats.

The squash players' singles campaign ended in the semifinal stage but that was enough to yield three bronze medals, there bes performance in terms of number of medals won.

"I don't want make excuses but it's hurting badly. Against this player, you need to have high intensity. Towards the end of the second game it flared and I lost my intensity. But credit to him for fighting back after losing two sets," Ghosal said.

The debut sport of bridge also delivered some good news for India as medals were assured in the men's team and mixed team events. The two teams made the semifinals of their respective competitions. After the qualification rounds, the men's bridge team was placed fourth while the mixed team took the top spot.

The women's hockey team also continued its fine run so far and advanced to the semifinals with a 4-1 triumph over defending champions South Korea. Gurjit Kaur's two penalty corner conversions late in the game was high point of the match for India.

There was no shooting medal to celebrate in Palembang today as the Indians drew a blank in the men's 25m rapid fire pistol event in which there were expectations from 15-year-old Commonwealth Games gold-medallist Anish Bhanwala.

In the boxing ring, 31-year-old debutant Pavitra (60kg) advanced to the quarterfinals after out-classing Pakistan's Rukhsana Perveen in a bout that lasted just one round.

But there was no end to India's archery woes as they continued to misfire. The recurve archers will return empty-handed from the Games with both the men and women's sides crashing out in the quarterfinals of the team events in Jakarta.

After a disappointing campaign in the individual recurve events, the Indian women's team lost 2-6 to formidable Chinese Taipei, while the men were beaten by Korea.

Similar was the story of the country's weightlifters. Commonwealth Games bronze-medallist Vikas Thakur finished eighth in the men's 94kg category with a total of 335kg (145kg+190kg).