Australian Open 2020 Day 9 HIGHLIGHTS: Novak Djokovic won his quarter-final to set up a semi-final showdown with Roger Federer, who earlier survived a massive scare. Women's singles world No.1 Ashleigh Barty also advanced to the semi-finals in the second singles match of the day at the Rod Laver Arena on Tuesday. While Federer and Barty played in the Day Session, Djokovic was at the centre court of Melbourne Park in the Night Session.

Federer took the court against USA's Tennys Sandgren in the last singles match of the morning session. Federer started on a bright note by taking the first set but put himself under the pump by losing the next two. In the fourth set, Federer saved an incredible seven match points to force a decided, which he won after one break of serve. Federer has not looked his best so far in Melbourne.

Schedule for Day 10 at Melbourne Park:

7:00AM - Garbine Muguruza vs [30] Anastasia Pavlyuchenkova

This is how dominant Novak Djokovic was! 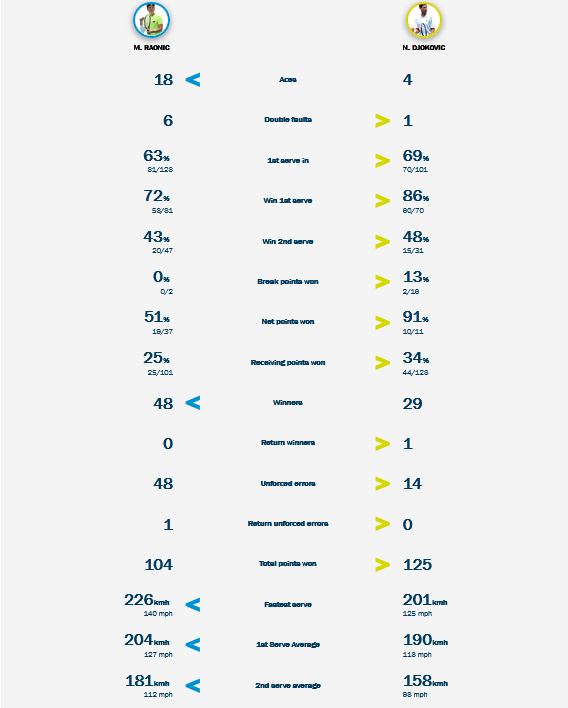 Novak Djokovic comfortably beat Milos Raonic 6-4, 6-3, 7-6(1) to set up a semi-final showdown against Roger Federer at the Rod Laver arena on Thursday. Djokovic was never really troubled by the Canadian and easily took the match.

Serbian sensation 🇷🇸@DjokerNole def. Milos Raonic 6-4 6-3 7-6(1) to advance to his eighth #AusOpen semifinal, where he will meet Roger Federer for the 50th time. #AO2020 pic.twitter.com/ElT6H9jDAE

Raonic has got a couple of chances on Djokovic's service games and has stretched him too but has not been able to make those opportunities count. We are on serve in the third set of this men's singles quarter-final.

This is all too easy for the worl d No.2. Novak Djokovic broke Milos Raonic once in the second set and held his own serve thereafter to easily take a 2-1 lead in the quarter-final. Djokovic is well on his way to meeting Roger Federer in the semis.

After taking a 5-4 lead, Novak Djokovic breaks Milos Raonic on his fourth set point to take a 1-0 lead in the quarter-final. Whoeever wins, a showdown against Roger Federer awaits.

Novak Djokovic is now taking Canadian Milos Raonic at the Rod Laver Arena and with his exceptional returning skills, the world No.2 is already putting the big-server under pressure.

"Gotta get lucky sometimes. That was seven match points and you cannot control, even though it might look like that. I got a bit lucky today. As the match went on, I felt a bit better and just played on. I don't deserve this one but I am standing here and obviously very happy," Federer said in the on-court interview. Read his full interview here 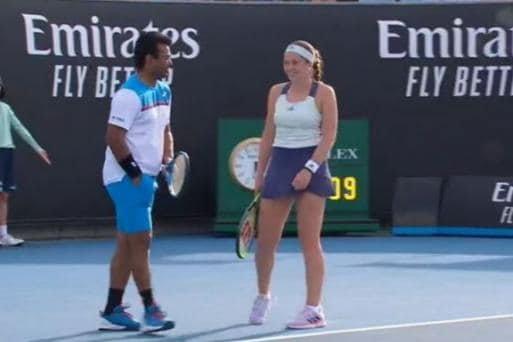 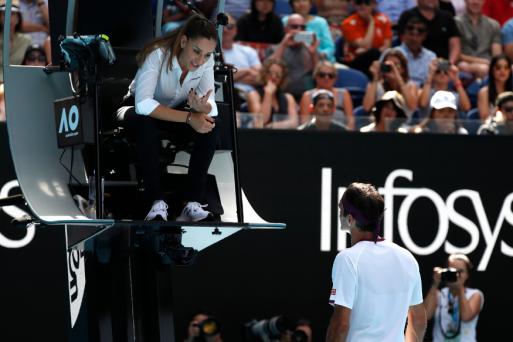 The great escape continues for Roger Federer at Australian Open! The Swiss survives a massive scare, saving seven match points on the way, to beat Tennys Sandgren 6-4, 2-6, 2-6, 7-6(8), 6-3 to advance to the semi-finals, where he will face the winner of Milos Raonic vs Novak Djokovic. Read More

Roger Federer Breaks Tennys Sandgren | Federer has started to play a bit better in the fifth and deciding set while Sandgren has started looking volatile. And with the mental advantage on his side, Federer breaks Sandgren to take a 4-2 lead.

We stay on serve so far in the deciding set. Federer did have a break point in Sandgren's first service game but the American pulled out his serving prowess once more to come out of trouble.

What an exhilarating set of tennis! This was an absolute seesaw battle and Roger Federer saved a total of seven match points to somehow force the deciding fifth set. Tennys Sandgren will be heartbroken and mentally drained out with this. It will be interesting to see how he copes up in the final set of tennis in the quarter-final.

And the crowd goes WILD!@rogerfederer saves a flurry of match points to take the fourth 7-6(8) to level the match at two sets all vs Sandgren.

Federer saves three more match points, two on his own serve and one on Sandgren's serve to keep this fourth set alive in the tiebreak and now, he has has a set point of his own.

Roger Federer Saves Match Points | Tennys Sandgren's consistent tennis has pushed Roger Federer to the limits. Federer saved three match points in the 10th game of the fourth set to stay in the match. This has turned into a huge battle, Federer wroking very hard to stretch the match.

Nick Kyrgios-Amanda Anisimova in Doubles Action | Nick Kyrgios is partnerting Amanda Anisimova in mixed doubles and they are playing their third round match against fifth seeds Barbora Krejcikova-Nikola Mektic. Despite trailing 1-3 in the first set, they sneaked past their opponents with some excellent shortmaking towards the end to take it 6-4. Kyrgios was seen talking to Anisimova a lot and guiding her throughout the first set at Margaret Court Arena.

Trailing 1-3, Anisimova/Kyrgios push back to sneak out the first set 6-4 against No. 5 seed Krejcikova/Mektic.#AusOpen | #AO2020 pic.twitter.com/L4H0jbAifq

Roger Federer is in the dumps now! If Federer has to make the semis, it will have to be in five sets now. Tennys Sandgren has kept his game very clean and Federer has been making far too many errors, gifting points to the American. Sandgren took the third set 2-6 and now leads the match 3-6, 6-2, 6-2.

This is some performance from @TennysSandgren!

Roger Federer will need to win in five sets to make the semi-finals. It's Sandgren in the lead 3-6 6-2 6-2 #AusOpen pic.twitter.com/6ZAQmGTaiq Roger Federer Drops Second Set | Federer made far too many mistakes in the second set. Sandgren jumped on those big opportunities to easily take the second set 6-2. Federer needs to turn this around very soon as he has already played a five-setter and four-setter in the tournament so far.

Tennys Sandgren did well most part of that first set but one loose service game and Roger Federer pounched at it to take it 6-3 and get himself a step closer to the semi-finals. Federer has shown a solid game so far and Sandgren has not been able to make many inroads.

Roger Federer Breaks Tennys Sandgren | And Federer has struck! Federer breaks Sandgren early in the first set  and then holds his own serve to take a 5-2 lead in the set. Federer is now just a game away from stepping up the ladder on Melbourne.

At 38 years 178 days, @rogerfederer could be the oldest man to reach the #AusOpen semifinals since Ken Rosewall (42 years 68 days) in January 1977.

Roger Federer in Action | Roger Federer is out there at the Rod Laver Arena playing Tennys Sandgren. He had three break points in the fourth game of the quarter-final but Sandgren did well to save them all and hold his serve.

Barty is looking to become the first woman to win the first Grand Slam of the year in 42 years.

Top seed @ashbarty posts her best #AusOpen result to date, reaching the semifinals with a 7-6(6) 6-2 win over Petra Kvitova.

She's the first Aussie woman to reach this stage since Wendy Turnbull in 1984 🇦🇺#AO2020 pic.twitter.com/gPQfhEuzLC

Ash Barty is on Her Way to Semi-final | The Australian Ash Barty is a set and a double break up against Petra Kvitova and it's a huge climb for Kvitova from here. Barty has taken full control after taking the first set 7-6(6).

💪@ashbarty is one set away from becoming the first Australian women's #AusOpen semifinalist since Wendy Turnbull in 1984.

Gauff-McNally Begin Quarter-final | Coco Gauff-Catherine McNally have begun their quarter-final against second seeded pair of Timea Babos and Kiki Mladenovic. They have already been broken while the second seeds have held their serve as well to take a 2-0 lead in the first set. Gauff-McNally are yet to win a point in the match.

Barty in Action | Ashleigh Barty is currently in action at the Rod Laver Arena against 7th seed Petva Kvitova. The world No.1 was broken early in the first set but she bounced back right back to break back Kvitova to keep the proceedings on serve.


Djokovic, who will next take on Federer, looked his ominous self against big-server Milos Raonic. He comfortably broke the Canadian once each in the first two sets and then mauled him in the third set tiebreak to breeze into the last four. Djokovic is looking to win his second straight and overall eighth Australian Open title.

Out of the three big seeds, Barty was the first to take the court and she defeated seventh seed Petra Kvitova 7-6(6), 6-2. She will next take on USA's Sofia Kenin, who beat Ons Jabeur 6-4, 6-4 in the first singles match of the day. Barty is one of the big favourites to becomes the first local to win the Australian Open in 42 years.

Schedule for Day 10 at Melbourne Park:

7:00AM - Garbine Muguruza vs [30] Anastasia Pavlyuchenkova