Australian Open 2020 LIVE Score and Updates: World number one Rafael Nadal weathered a fierce storm from gutsy showman Nick Kyrgios Monday to set up an Australian Open quarter-final against Dominic Thiem and keep alive his quest for a 20th Grand Slam title. The Spanish top seed came through a riveting clash on Rod Laver Arena 6-3, 3-6, 7-6 (8/6), 7-6 (7/4) to end the gallant hopes of the basketball-mad Australian, who came on court wearing an LA Lakers shirt in honour of Kobe Bryant.

Bubbling animosity has characterised relations between the two, after Nadal accused Kyrgios of lacking respect and the Australian fired back that the Spaniard was "super salty". There was also little to split them, with Nadal leading their career head-to-head 4-3 but Kyrgios 2-1 up on hardcourts and an even 1-1 in their Grand Slam matches, both at Wimbledon. The second of those, last year, was a torrid affair, with Kyrgios ranting at the umpire, serving underarm and deliberately firing a forehand at the Spaniard. However, Kyrgios struck a conciliatory tone before Monday's match, saying there was a "layer of respect" between the two players, despite their differences.

Rafa to John McEnroe on Kobe Bryant's death: "I woke up this morning with this terrible news. I'm super sad. He has been one of the greatest sportsman in history. He deserves a big round of applause (the crowd obliges). He always wanted more, he always wanted to increase his level. He was a true inspiration. It's one of those days you want to forget but of course Kobe Bryant will be in our hearts and minds forever."

They don't call him the world No.1 for nothing ☝️🇪🇸

The fourth set heads to a tie-breaker and you still have to favour Nadal for the win here. He races into a 40-0 lead. A big forehand clips the net and diverts wide but it's a small reprieve for Kyrgios with an ace following as he levels fourth set 6-6.

What a comeback by Kyrgios! The Australian has found a second wind as he holds his serve after yet another deuce. Two absolutely stomping points from the world number 23 ensures that he takes the lead and now Nadal will have to serve to stay in the set. Kyrgios runs back to his chair, perhaps to show he still has some extra energy left.

There's a twist in the tale! After being the second best all through the fourth set, Kyrgios breaks Nadal as he served for the match. Kyrgios hits a powerful forehand down the line, which Nadal can't chase down in time to level things up once again.

Kyrgios holds to 30 and Nadal will serve for the match. Nadal earlier held his serve easily even as Kyrgios battled to get even.

The Australian is holding on, unwilling to let Nadal go up a double break as he digs out a hold from deuce, serving his 21st ace to keep the match alive. 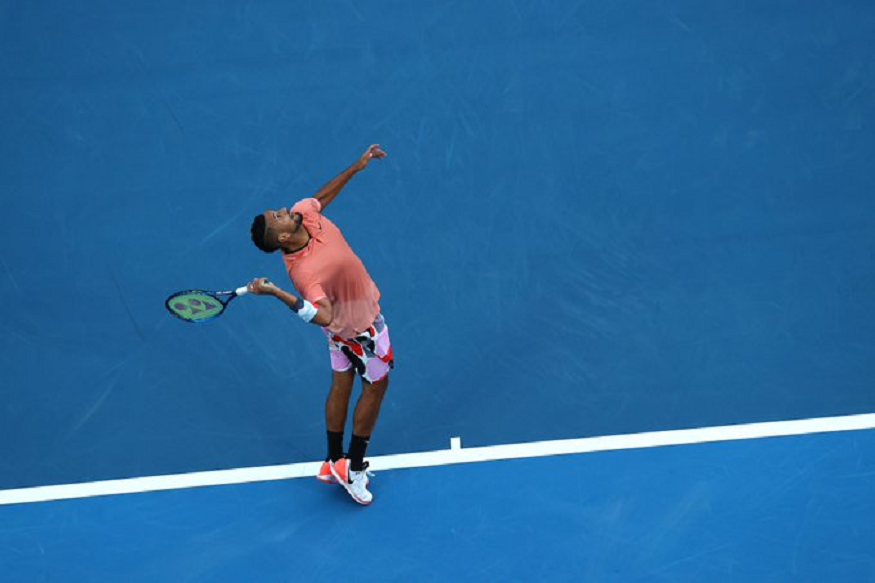 Nadal once again holds his serve to love, his ninth such hold in the match, with his eyes firmly set on the finish line. The World No.1 hits some exquisite groundstrokes. At 40-0 down, the Australian flings himself desperately at the shot but ends up on the ground.

After another couple of forehand errors, Kyrgios digs deep to hold his serve as he finds the energy to hit two aces. The Australian is still within touching distance of the World No.1.

Nadal holds his serve to love as while Kyrgios’s energy level seems to have waned, Nadal seems to have unlocked another gear. A sumptuous forehand winner down the line gives the Spaniard the game

Kyrgios hands over the break to Nadal quickly in the fourth set as he makes two forehand errors and serves a double fault at a crucial juncture. His footwork seems to have deserted him as the battle with Nadal has tired him out. Nadal wraps up another game quickly to level things up in the fourth set. Kyrgios has still just faced one break point all match as Nadal continues to chase everything down and comes up with impossible shots.

A relatively easy hold for Nick Kyrgios in the first game of the fourth set has he serves two aces. Has he enough in the tank to take Nadal to the fifth set? Zverev ended Rublev's 15-match winning streak, like he had promised before the match, and moved into the quarterfinals with a 6-4, 6-4, 6-4 win over the Russian player at Melbourne Arena.

Rublev hadn't lost a match since October, having won four matches at the Davis Cup finals and winning titles in Doha and Adelaide to start this season.

It is the first Australian Open quarterfinal for Zverev, and his third at a Grand Slam event. The seventh-seeded Zverev will next play 2014 Australian champion Stan Wawrinka.

The No.30 seed topples the 17th seed, meaning that there will be a first-time Australian Open champion in the women's draw.

Pavlyuchenkova led 5-2 in the first set before 2016 Australian Open champion Kerber began a comeback that saw her win the opening set in a tiebreaker. But Pavlychenkova took the second in a tiebreaker and then broke serve immediately on the way to a 4—0 lead in the third.

Pavlyuchenkova, who took out No. 2 Karolina Pliskova in the third round, will next play Garbiñe Muguruza, who beat 9th-seeded Kiki Bertens 6-3, 6-3.

Kerber was the last former Australian titlist left in the draw.

Third set is going to the tiebreak!

Rafael Nadal holds serve and then so Nick Kyrgios does... again with some difficulty.

Rafael Nadal holds serve and then Nick Kyrgios does the same... with some difficulty.

The Spaniard is finding his mojo back and that would definitely worry the Australian.

Alexander Zverev takes the second set too at 6-4 against Andrey Rublev.

The German is just one set away from the quarters. Anastasia Pavlyuchenkova fights back to take the second set 7-6(4) against Angelique Kerber.

Rafael Nadal holds serve and that too at love.

And now both Nick Kyrgios and Rafael Nadal break each other's serve. Getting heated in the middle... Both Nick Kyrgios and Rafael Nadal held their serve. Nick Kyrgios was seen sporting a Kobe Bryant No. 8 jersey as he walked out to face Rafael Nadal as Coco Gauff had Bryant's numbers 8 and 24, along with the inscription 'Mamba Mentality'.

Nick Kyrgios takes the second set 6-3 to draw level. The Australian's big serves were on full display and so was his flair.

After Rafael Nadal had held serve at love.

Rising to the occasion.@NickKyrgios levels this fourth round battle with Nadal, taking the second set 6-3 in 46 minutes after dropping the first by the same scoreline.

Will the 23rd seed cause a massive upset tonight? #AO2020 | #AusOpen pic.twitter.com/EavQx6WnWZ

Then Nick Kyrgios does too. Both with some relative ease. It is the Australian who has a slight lead in the second set, being one game away.


"I don't really dislike him. I don't know him at all. Hell of a tennis player. Don't know him as a person. I'm sure he's okay," he said. "I'm super-excited honestly. Playing one of the greatest tennis players on centre court at your own Slam, it's pretty damn cool." Either Nadal or Kyrgios will go into a quarter-final against Gael Monfils or Dominic Thiem, the Austrian fifth seed.

Stan Wawrinka battled past Russian fourth seed Daniil Medvedev in five sets to reach the Australian Open quarter-finals with a 6-2 2-6 4-6 7-6(2) 6-2 victory on Monday. Medvedev came into the contest having won both their career meetings at Grand Slams in four sets but the 2014 Australian Open champion took the opening set with a double break of the Russian's serve. Medvedev, who lost to Rafa Nadal in five sets in last year's U.S. Open final, levelled the contest by breaking Wawrinka twice in the second and nosed ahead in the match with a break in the seventh game of the third. But Wawrinka refused to yield and took the fourth set tiebreaker comfortably before breaking Medvedev twice in the fifth.

Anett Kontaveit fought off a spirited challenge from Polish teenager Iga Swiatek to reach her first Grand Slam quarter-final with a 6-7(4) 7-5 7-5 victory in the fourth round of the Australian Open on Monday. The Estonian 28th seed saved 12 breakpoints in a see-saw contest on Melbourne Arena as she battled back from a set down to book a last-eight meeting with twice Grand Slam champion Simona Halep. Halep had to be at her counter-punching best to fight off another determined second-set comeback bid from Elise Mertens as the Romanian world number three advanced to the quarter-finals of the Australian Open. Halep, a beaten finalist at Melbourne Park two years ago, moved on with a 6-4 6-4 victory.
Garbine Muguruza powered into the Australian Open quarter-finals with a 6-3 6-3 demolition of ninth-seed Kiki Bertens in just 68 minutes on Monday. Muguruza, a former French Open and Wimbledon champion, was unseeded at Melbourne Park and has proved a dangerous floater in the draw, having also thrashed fifth seed Elina Svitolina 6-1 6-2 in the previous round. Fifth seed Dominic Thiem kept his flawless record against Gael Monfils intact with a trouble-free 6-2 6-4 6-4 victory on Monday to reach his maiden Australian Open quarter-final. Thiem, twice a French Open finalist, came into the fourth-round clash against the 10th seed having won all five of the matches they have previously played and did not face a single breakpoint against the Frenchman on the Rod Laver Arena.

Order of play at the Australian Open on Monday: