Australian Open 2022, Day 9, Tennis Highlights: Here are is all the actions from the first Grand Slam of the season.

Australian Open 2022, Day 9, Tennis Highlights: A resurgent Madison Keys reached her first Australian Open semi-final since 2015 with another big upset to down French Open champion Barbora Krejcikova on Tuesday. The unseeded American, ranked 51, was too good for the Czech fourth seed who struggled in the searing Melbourne heat, crashing 6-3, 6-2 on Rod Laver Arena. Matteo Berrettini prevailed over Gael Monfils after a Read More Gael Monfils bags the fourth set and we need a fifth set to decide the winner against him and Matteo Berrettini! 2nd Set in the Bag too for Berrettini

Man on a mission. Gael Monfils of France falls to the court during his quarterfinal match against Matteo Berrettini
Jan 25, 2022 15:09 IST

Well, that was easy!

Ashleigh Barty Cruised into the semifinals of the Asutralian Open with straight sets win over Jessica Pegula. The Aussie won the match 6-2, 6-0 in an hour and three minutes.

World number one Ashleigh Barty has bagged the first set 6-2 in no time. Barty won the first two games after which Pegula made a comeback. The American won another game, the fifth one but Barty was too strong for her throughout as the Australian sealed the set with an ace. She a hit a total of 5 aced in the first set.

Home favourite Ashleigh Barty is in action now! The top seed is taking on American tennis star Jessica Pegula in the quarterfinals tie.

It is a Present of Life That I am Playing Tennis Again: Rafa Nadal

“The real true is that 2 months ago we didn’t know if we would be able to be back on tour, at all. So here I am. For me, it is a present of life that I am playing tennis again.”

One for the ages ✨ 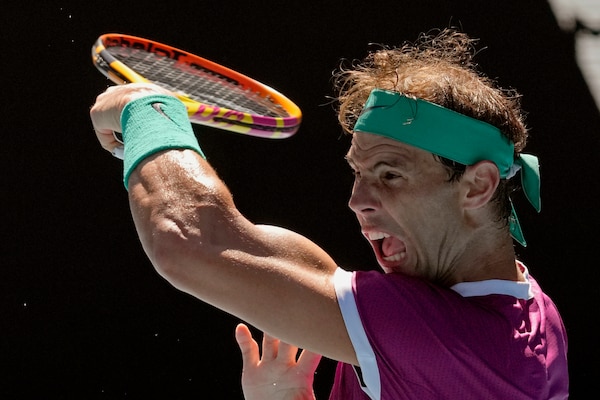 Sixth seed Rafael Nadal, who was struggling to get a grip on the match after winning the first two sets has raced off to a 3-0 lead in the fifth and the final set. However, things could take yet another turn as it did in the third set that brought Shapovalov back in the match.

We are going to the FIFTH SET!

Denis Shapovalov has completed his comeback from two sets down. The Canadian lost the first two sets 3-6 and 4-6 but won the next two in a commanding manner against Rafael Nadal. Rafa is looking a shadow of himself now. Are we set to see another upset at the Australian Open today?

Not looking back 👀@denis_shapo fights back to level things up against Nadal, taking the fourth set 6-3.#AusOpen • #AO2022 pic.twitter.com/aAhsm8XrbL

Shapovalov 4-1 Ahead in Fouth Set

Rafael Nadal is struggling and he is not looking like the player he was an hour before. Maybe it is the heat or some medical issue that the 20-time Slam champion is facing. He even called in the doctors before the sixth game.

Shapovalov Ahead in Fourth Set

Things are getting interesting in the match between Shapovalov and Nadal. The Canadian 14th seed is ahead in the fourth 2-1. Nadal has not been able control Shapovalov since the the third set.

Denis Shapovalov wins the third set 6-4 in 51 minutes. The double faults hurt Nadal in this set.

Sania Mirza Out of Australian Open

The mixed doubles team of Sania Mirza and Rajeev have been knocked out of the Australian Open, after they lost their QF tie against Jaimee Fourlis and Jason Kubler 4-6, 6-7 in 1 hour and 30 minutes

Thank you for the memories, @MirzaSania ❤️

The two-time #AusOpen doubles champion has played her final match in Melbourne.#AO2022 pic.twitter.com/YdgH9CsnF0

Denis Shapovalov started the second set in a good way but Rafael Nadal made his way back into the match. At one point of time it looked like Shapovalov could win the set but at 3-3 Rafa upped his game and eventually bagged the set 6-4.

You are All Corrupt: Denis Shapovalov

The Canadian tennis star is not happy with the amount of time Rafael Nadal is taking in between sets. Shapovalov was on his line to start the second set but Rafa was nowhere near. He approached the chair umpire for a time code violation, once he refused, Denis said: You are all corrupt.

The mixed doubles pairing of Sania Mirza and Rajeev Ram is in action against the Australian pair of Jaimee Fourlis and Jason Kubler. The Australians have won the first two games.

We are going to the FIFTH SET!

Sania Mirza Out of Australian Open

You are All Corrupt: Denis Shapovalov

Ashleigh Barty and Barbora Krejcikova can stay on course for a high-class semi-final collision, while Rafael Nadal looks to continue his march to a record 21st Slam title as the Australian Open hits the quarter-final stage on Tuesday.

Home hope and world number one Barty thrilled the crowd by defeating the giant-killing Amanda Anisimova 6-4, 6-3 in the fourth round and faces another American, Jessica Pegula, in the night session on Rod Laver Arena.

Barty, the 2019 French Open and 2021 Wimbledon champion, looks in irresistible form as she chases her first Australian Open crown.

Top seed Barty, who is aiming to become Australia’s first women’s champion on home soil in 44 years, warned she will not make it easy for Pegula.

“I try to adapt my game as best as I can to try and make my opponent uncomfortable,” said Barty. “And that will be no different when Jess and I play.”

Pegula, who revealed last week she had been relaxing with nights at the casino, was a surprise winner over fifth seed Maria Sakkari of Greece.

“That was definitely my best match of the year,” declared the 27-year-old Pegula after reaching the last eight for the second successive year.

A semi-finalist at Melbourne Park in 2015 but unseeded this year, Keys puts her revival down to a fresh perspective after struggling previously with Covid-enforced bubble life on tour.

“I don’t really thrive when my entire life becomes about tennis,” she said.

The Spanish great showed all his experience and tenacity to prevail 16-14 in a tiebreak, the longest of his illustrious career, before beating France’s Adrian Mannarino in straight sets.

“First set was very emotional,” said the 35-year-old Nadal, who won his lone Australian Open back in 2009.

A second this year would take him ahead of absent rivals Novak Djokovic and Roger Federer, who also have 20 Grand Slam titles.

The 22-year-old Shapovalov — who caught Covid-19 before the Slam and was not even sure he would play in Melbourne — enjoyed a routine win against an out-of-sorts world number three Alexander Zverev.

“After coming out of quarantine and playing the ATP Cup, I had a little bit of doubt, wasn’t ready to play the first match and worked my way through the tournament,” said Shapovalov, who said he suffered aches and pains while recovering from the virus.

“I wasn’t practising that much, to be honest, and just trying to prepare the body as best as possible,” he said.

Veteran Frenchman Gael Monfils meets big-serving Italian Matteo Berrettini in the last quarter-final on Tuesday and warned the seventh seed: “I’m not quite finished yet”.

The 35-year-old 17th seed Monfils is yet to drop a set in Melbourne while Berrettini sent down 28 aces in sweeping past Spain’s Pablo Carreno Busta.