PV Sindhu and Kidambi Srikanth have been drawn in tough groups for the round-robin stage at BWF World Tour Finals.

PV Sindhu has been drawn in Group B with world number one Tai Tzu-ying and home favourite Ratchanok Intanon as well as Pornpawee Chochuwong of Thailand for the round-robin stage at BWF World Tour Finals.

Denmark’s Viktor Axelsen — who is also unbeaten over the past fortnight — faces Taiwan’s world number two Chou Tien-chen, Indonesia’s Anthony Ginting and Lee Zii Jia of Malaysia in Group A. 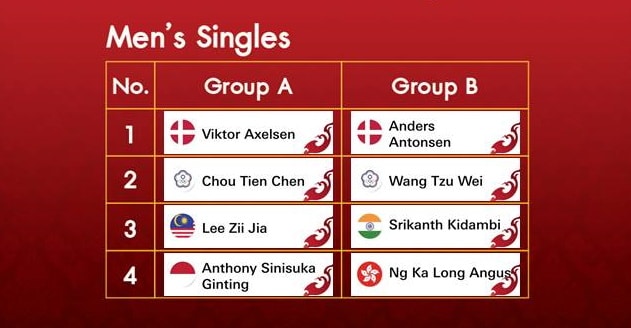 Sindhu’s comeback to international badminton after the coronavirus-induced break was not as good as she would have expected.

The Indian, who has been training in London for the last few months, couldn’t go the distance after losing a close opening match in Thailand Open, the first of the Asia leg.

In the second event last week, Sindhu suffered a demoralising straight-game defeat against former world champion Ratchanok in the quarterfinals and she will have to gather herself as she opens her campaign against magician Tzu Ying, who reached the finals in both Thailand Opens.

Srikanth, who had reached the semifinals of BWF Super Series Masters Finals in 2014, couldn’t spend enough time on the court.

He had pulled out of the first Thailand Open ahead of the second round due to a calf muscle pull, while he was forced to withdraw after the opening round last week after his roommate B Sai Praneeth tested positive for COVID-19.

The Indian duo will have a tough task taming their rivals in the tournament, going by their recent performances and head-to-head records.

Sindhu has a dismal 5-15 record against Tzu Ying, who beat the Indian in their last two meetings, while Ratchanok humiliated her last week in a lop-sided quarterfinal to enjoy a 5-4 record.

Against Pornpawee, her third opponent in the group, Sindhu has a 3-1 record but the Thai had defeated the Indian in their last clash in 2019.

In men’s singles, Srikanth has beaten his first-round opponent Anderson in 2017 but the Danish is a far more improved player now, having reached the world number three.

Against Wang, whom he plays next, Srikanth has a 3-0 record, while he holds a 2-2 head-to-head count against Angus.

Men’s champion Kento Momota tested positive just before the Thai tournaments began, forcing him to withdraw along with the entire Japanese team.

China’s team, including women’s title-holder Chen Yufei, were unable to travel because of the country’s strict coronavirus rules.

The delayed 2020 season finale, starting Wednesday, is the third behind-closed-doors event in three weeks in the Thai capital as badminton resumes after months of near-inactivity owing to the coronavirus.

Despite the biosecurity arrangements, four people inside the Bangkok “bubble” have tested positive for the coronavirus, including two players who were forced to withdraw.