News18.com has compiled some data on the India's FIFA U-17 Women's World Cup probable squad of 35 players.

The Indian team that will play the World Cup next year will be the first women’s team from the country to play a FIFA tournament. The tournament will kickstart at the Indira Gandhi Athletic Stadium in Guwahati and the Kalinga Stadium in Bhubaneswar by Group A and B, respectively. India, who hold the position of ‘A1’ in the draw by virtue of being the hosts will take on A2, who will be confirmed when the draw takes place. The other Group A match will also take place in Guwahati.

This is a massive occasion for the young girls who will be representing the country on the huge platform. Swedish Thomas Dennerby is the coach of the team while Alex Ambrose is the assistant coach. A bunch of probables have been training for the last couple of years. While they did play a few games in 2019, including an U-17 Women’s Championship and friendlies against Sweden, Thailand and Romania, their training has been disrupted by the Covid-19 pandemic.

After a halt of almost seven months, the team is set to get together in Jharkhand on October 15 to begin their training sessions again. “We have picked Jharkhand as the venue for the camp. They were eager to hold the camp for the girls and their Chief Minister (Hemant Soren) has assured full support,” AIFF general secretary told IANS.

The average age of the 35-woman squad is 16. According to the data accessed by News18.com, a lot of girls have already turned 17 but that will not be a problem as after the postponement announcement, FIFA kept the original age criteria, which said: “players born on or after 1 January 2003 and on or before 31 December 2005” will be eligible. There are twelve 16-year-olds and fourteen girls of 15 years of age in the squad. The probable squad includes players from 11 states of the country with Haryana recording the maximum number. Second to Haryana are Manipur and Jharkhand while all the rest numbers are below five. 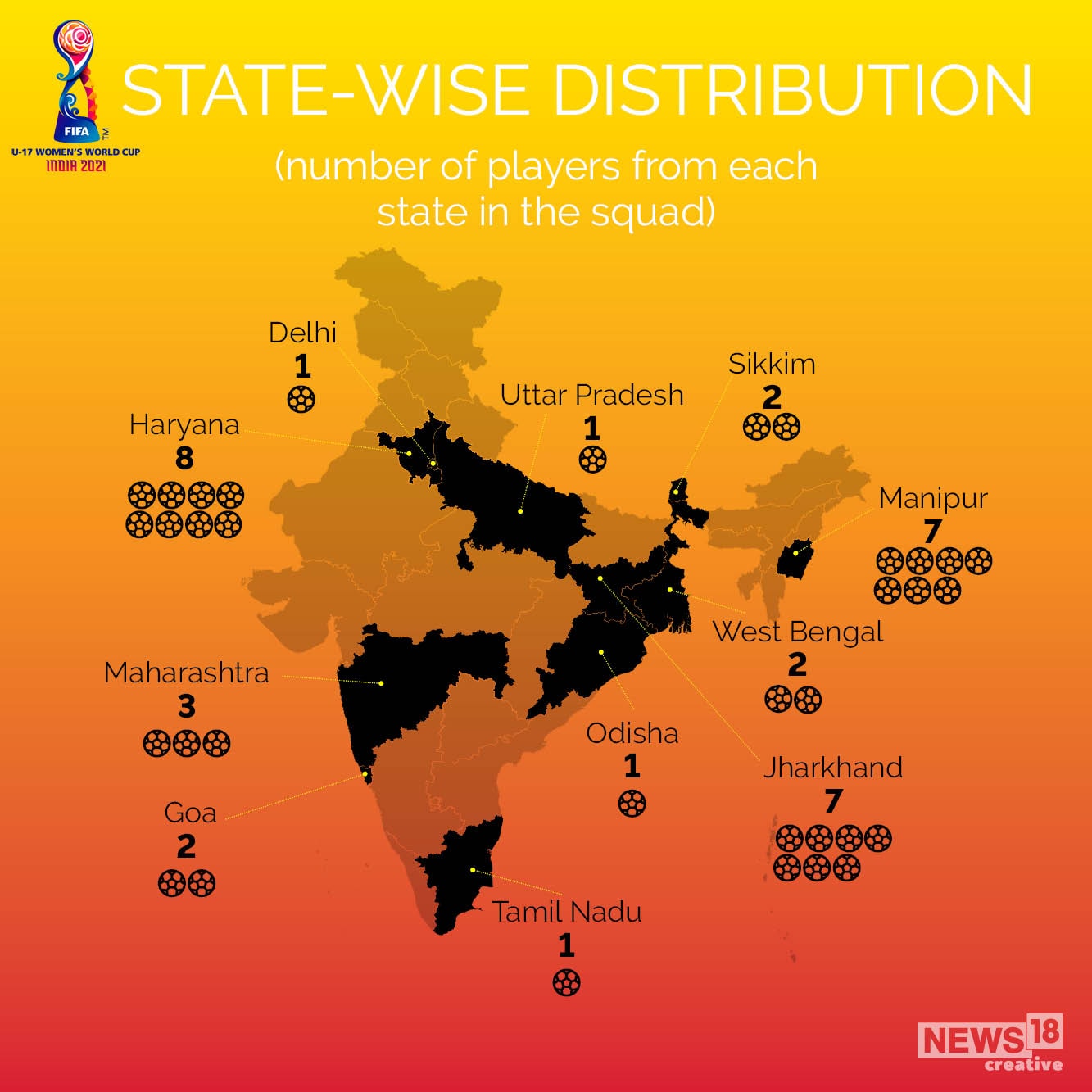 The average number of matches played between the 35 players accounts to 14.7. While there are few who have 10 and less number of matches under their belt, among the ones with over 10 matches, Haryana and Manipur have the highest number of players. In the squad, the midfielders have the maximum average of matches under their belt, also owing to the fact that the team is filled with players in that position. The midfielders also record an average of 11.67 goals among them.

The maximum average of matches in the squad belong to the defenders at 17.5 while the goalkeepers are the farthest in that department.

In the goals department, the six forwards in the squad have an average of 14.67 goals while the defenders also record an average 5.75 goals. DISCLAIMER: The numbers are according to the data accessed by News18.com and may be tentative.