French Open 2021 Women’s Singles Semi-final Highlights: Barbora Krejcikova beat Maria Sakkari 7-5, 4-6, 9-7 to set the French Open women’s singles final against Anastasia Pavlyuchenkova, who defeated Tamara Zidansek 7-5 6-3. There are four Grand Slam semi-final debutants who will line up on Thursday with a golden opportunity knocking. Not since the 1978 Australian Open have a quartet of players reached the semis of a women’s Grand Slam for the first time.

Chris O’Neil, ranked 111 in the world, won the title on that occasion although it was a relatively weak field with few of the top players even bothering to play the event. The same cannot be said this year and whoever out of the four semi-finalists holds the trophy aloft on Saturday will have truly earned it.

First up on Thursday on Court Philippe Chatrier is 31st seed Pavlyuchenkova against 85th-ranked Zidansek, the first Slovenian player to reach the semi-finals of a Grand Slam. Unseeded Krejcikova then takes on 17th seed Sakkari who, in becoming the first Greek woman to reach a Grand Slam semi-final, enjoyed back-to-back wins over last year’s runner-up Sofia Kenin and on Wednesday reigning champion Iga Swiatek.

Down 5-3, 30-40 on her serve in the decider against 17th-seeded Maria Sakkari, Krejcikova hit a backhand winner at the net to stay alive in the match. She finally held and broke back in the next game to level at 5-5.

It's all going down to the wire...

Maria Sakkari edges ahead in the decider with a break against Barbora Krejcikova. 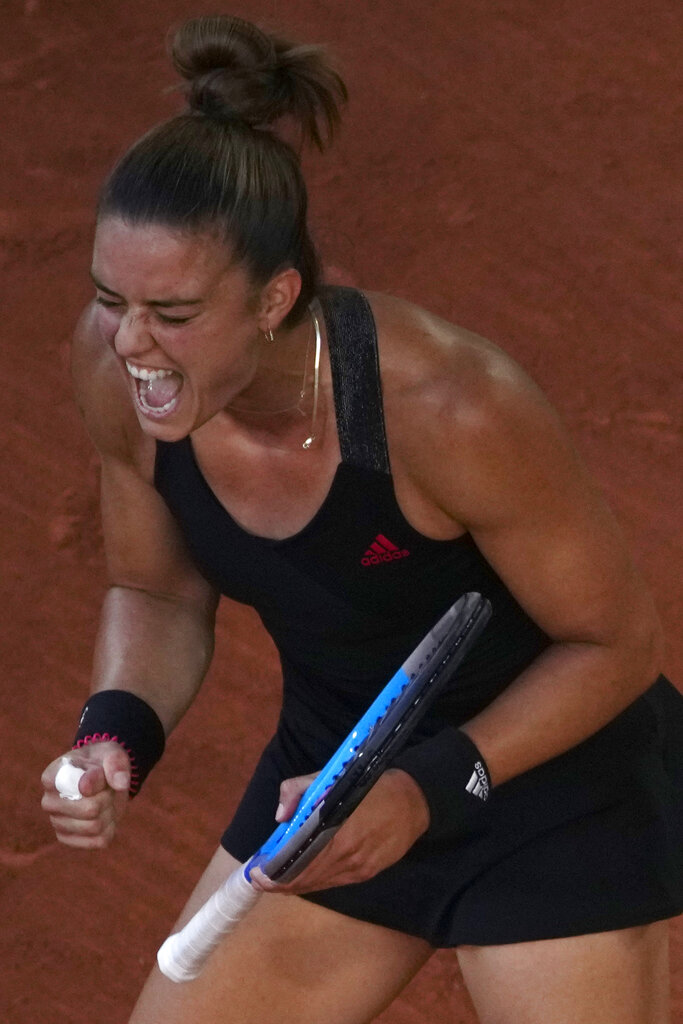 Maria Sakkari storms back and takes the second set, albeit after a few hiccups, 6-4 against Barbora Krejcikova!

Maria Sakkari has taken the beating in the first set to heat and races to a 4-1 lead in the second against Barbora Krejcikova! 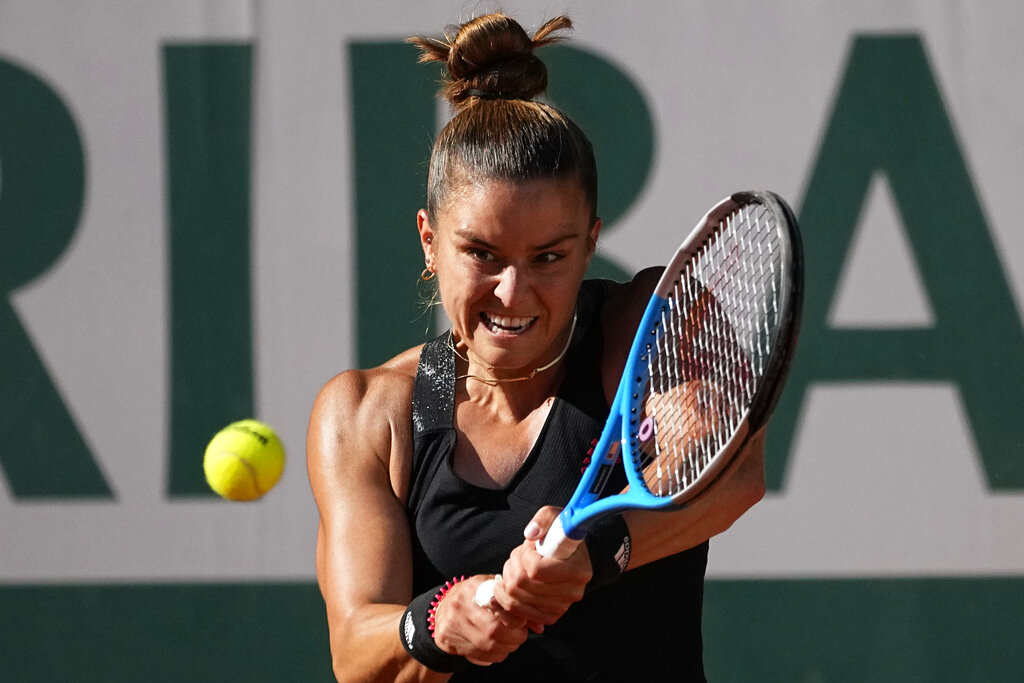 After going toe-to-toe, Barbora Krejcikova fights back to take the first set 7-5 against Maria Sakkari!

Eyes on the prize 👀

In 56 minutes, Krejcikova stays focused to capture a roller coaster first set 7-5. She's a set away from a first Slam final.#RolandGarros pic.twitter.com/RDT0d0vwua

Maria Sakkari leads Barbora Krejcikova 3-2 but it has been a tough fought battle... 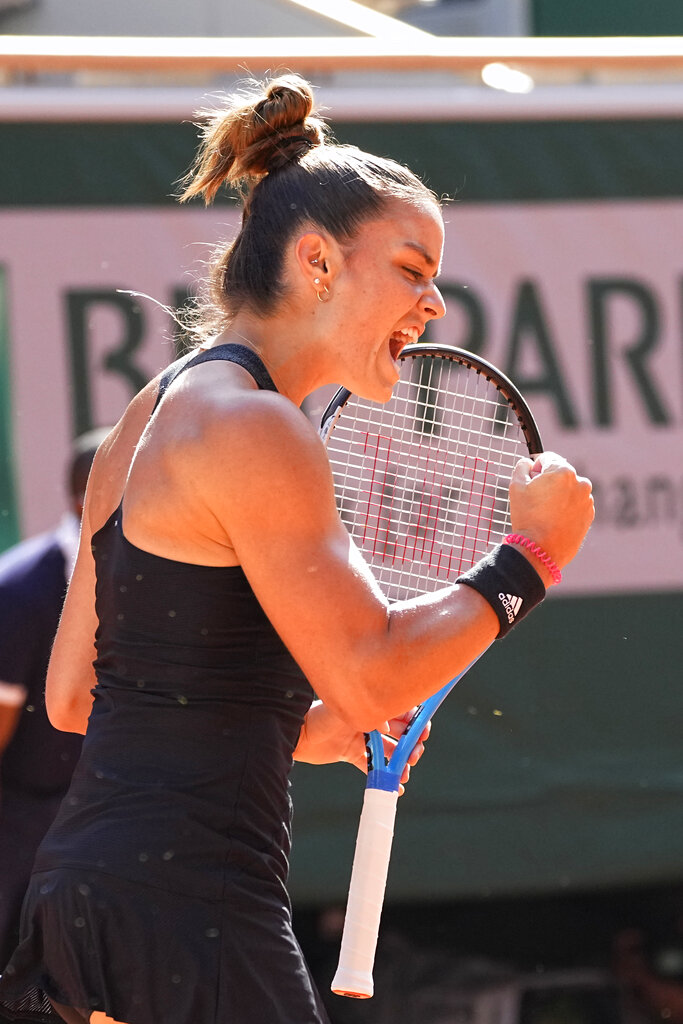 Up next.. Barbora Krejcikova and Maria Sakkari face-off for the other place in the final... Who will make it?

She becomes the first Russian woman to reach a final at a major since Maria Sharapova at the 2015 Australian Open.

Both players struggled with their serves on Court Philippe Chatrier but Pavlyuchenkova managed to hold her nerves better on important points.

Zidansek, who had never been beyond the second round at a major before, hit some superb drop shots and forehand winners but also made 33 unforced errors. “I wanted this so much that right now I don’t feel anything,” Pavlyuchenkova said.

“Tennis is such a mental sport. That’s what is really hard about tennis.” None of the four women’s semifinalists had previously advanced so far at a Grand Slam tournament. Pavlyuchenkova will either 17th-seeded Maria Sakkari or Barbora Krejcikova in Saturday’s final.

In her 52nd major, 🇷🇺 @NastiaPav has secured a maiden final and a return to the top 20 with a 7-5, 6-3 win over Tamara Zidansek. #RolandGarros pic.twitter.com/U4Mrz0M2CE

Anastasia Pavlyuchenkova seems to be in a hurry as she breaks Tamara Zidansek's serve early in the second set and leads 2-0! 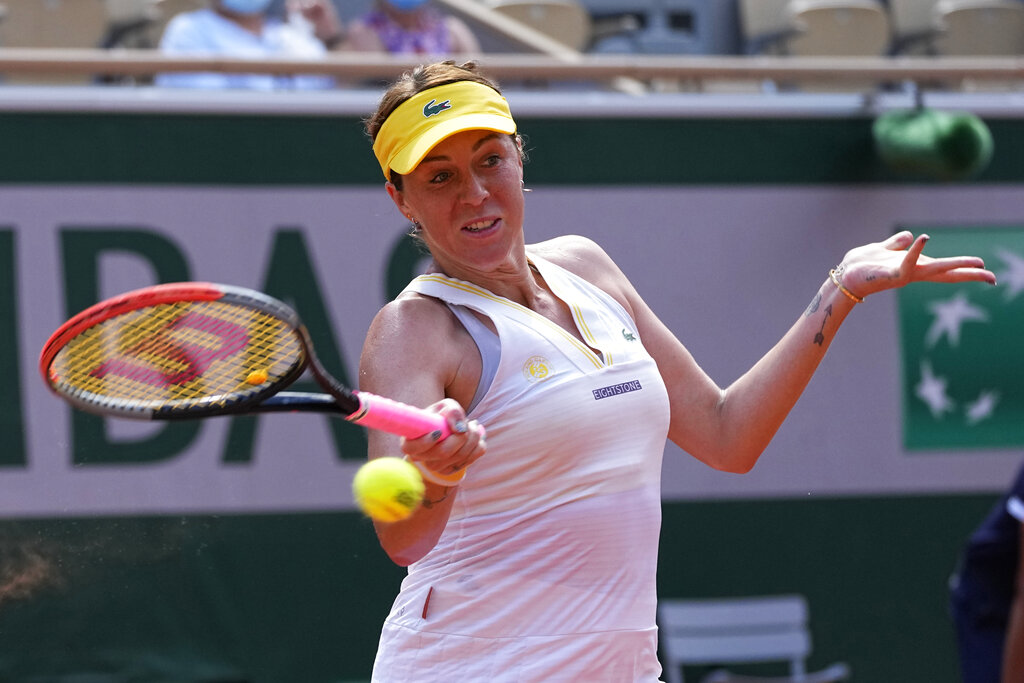 After going down an early break, Anastasia Pavlyuchenkova rebounds to take the opening set 7-5 over Zidansek. The 29-year-old 🇷🇺 is one set away from a first major final. #RolandGarros pic.twitter.com/GRjkgInSmq

It is Anastasia Pavlyuchenkova who takes the lead but Tamara Zidansek fight back to make it level! Neither one letting this opportunity go that easy... What a start to the semi-final!

Tamara Zidansek took a 2-0 lead with a break in the first point itself but Anastasia Pavlyuchenkova fought back with some powerful hitting to break back in the first set.

Anastasia Pavlyuchenkova and Tamara Zidansek are out on the court...

The 31st-seeded Anastasia Pavlyuchenkova is the most experienced. She finally made it to the last four at a major event after six previous losses in quarterfinals.

A spot in the final awaits. #RolandGarros pic.twitter.com/bIut1auCxV

Desirae Krawczyk of the United States and Joe Salisbury of Britain won the mixed doubles title at the French Open. The pair defeated Russians Aslan Karatsev and Elena Vesnina 2-6, 6-4, 10-5.

Their win ended Britain’s 39-year wait for a title at Roland Garros. The last British player to lift a trophy in the tournament's five main events was John Lloyd in the mixed doubles in 1982. He played with Wendy Turnbull of Australia.

Both Krawczyk and Salisbury were eliminated in the early stages of the doubles tournament in Paris and turned their focus to the mixed doubles. French Open 2021: For just the second time in the Open era, there are four first-time major semi-finalists in the women's singles, after the 1978 Australian Open.

Hello and Welcome to the live coverage of the French Open women's singles semi-finals - Anastasia Pavlyuchenkova vs Tamara Zidansek and Barbora Krejcikova vs Maria Sakkari.

After a fortnight of upsets at Roland Garros, no one in their right mind would wager their mortgage on who might be the last women standing.

Pavlyuchenkova, the oldest of the four semi-finalists at 29, has been knocking on the door in Grand Slams since she reached the French Open quarter-finals in 2011.

She lost that one and the next five Grand Slam quarter-finals she contested before finally breaking through that glass ceiling by outlasting Kazakhstan’s Elena Rybakina in a marathon three-set battle on Tuesday.

Zidansek had never won a main draw match at the French Open until she ousted former U.S. Open champion Bianca Andreescu in the first round — a result she said fuelled her with belief.

She showed great court craft to come through a topsy-turvy quarter-final against hard-hitting Spaniard Paula Badosa and will hope to mix it up against Pavlyuchenkova.

Sakkari’s straight sets win over Swiatek on Wednesday means that for the first time a Greek player has reached the semi-finals of the women’s and men’s singles at the same Slam after Stefanos Tsitsipas beat Daniil Medvedev on Tuesday.

On paper she is now the favourite but she lost to Krejcikova in Dubai in March and knows that while the title is tantalisingly in view, it remains a long way away.

Krejcikova, known more as a doubles specialist, stretched her winning run to a career-best 10 matches when she stopped the run of American teenager Coco Gauff on Wednesday and is hoping to become the first Czech player to win the women’s singles in Paris since Hana Mandlikova in 1981.

If she does she says it will be a tribute to the late Jana Novotna who helped her along the road to professional tennis.