Home » News » Other Sports » I Hope 2021 is a Game-changing Year for Me: Indian Table Tennis Star Sathiyan Gnanasekaran
6-MIN READ

I Hope 2021 is a Game-changing Year for Me: Indian Table Tennis Star Sathiyan Gnanasekaran

Sathiyan Gnanasekaran is looking forward to his first Olympic appearance and hopes for a much better 2021.

2021 is going to be a big year – it is the Olympic year! Tokyo Olympics was all set to be held in the year 2020 but then the novel coronavirus struck and the world of sports was brought to a screeching halt. Now, as the world tries to combat the virus and get back to living in the new normal, Olympics is all on the minds of sportspersons. For Indian table tennis star Sathiyan Gnanasekaran, it is no different.

Sathiyan, 27, is all set to participate in his first Olympics. He has been breaking new grounds for Indian table tennis since the last two to three years and has been creating his path for Olympic glory. “I hope to make a big mark in the Olympics. I want to pull off some upsets and reach the Round of 16 or the quarter-finals, that’s going to be the dream. I will try my best to prepare myself for that big event,” Sathiyan told News18.com during a telephonic conversation.

2020 has been tough for everyone in the world and for a sportsperson like Sathiyan, it meant a huge pause in the big stride he was taking towards the Olympics. However, he looks at the coronavirus break as the time when he got the chance to work on his own game rather than thinking about the opponents or the tactics he had to employ in each match. He hopes that helps him get success in the coming year.

Sathiyan is currently in Japan playing in the T.League against the top Japanese players. In his own words, he is one of the lower-ranked professionals in the league and each match has been extremely tough for him. He has played four matches so far, winning two and losing two. Sathiyan says he is lucky to be able to get such high-quality matches in spite of the situation due to the pandemic.

Apart from the excellent match practice he has got in Tokyo and Kanagawa (one and a half hours away from Tokyo), what Sathiyan is most thankful for is the high-intensity training he is getting. “More than the matches, I think the level of training I have got, practicing with top Japanese players, I don’t think I would have got this kind of practice available anywhere else. It’s great preparation for the Olympics and the best I could get,” he said. He describes the training in Japan as very high-intensity. “When you have 20-30 top players training together, you can imagine the intensity. They (Japanese) focus on a lot of skill training, practicing fine skills. For me personally, I have a great sparring so skill-wise, it’s not that different but the intensity has made a lot of difference. You know so many top-quality players pushing each other in training is great. You get tired quite fast.”

Sathiyan is looking at the T.League experience entirely as pre-Olympic practice. From getting accustomed to the halls and environment to getting used to the food, it’s all about preparing for the July 23-August 8, 2021 mega-event. “I have an idea about Japanese food now so before and during the Olympics, I know what to eat, what not to eat, what suits me, that’s a big advantage,” he said.

Sathiyan spoke about the “tough” quarantine he had in Tokyo because he began playing in the T.League and hoped the rules are either reduced or completely waived off come the Olympics. He said the Japanese airport was deserted and despite arriving in the country with a negative Covid-19 test, he was tested again at the airport and then, had to wait for a couple of hours before he was let off. He said they were also allowed to use only specified cabs for travel.

“It’s (quarantine) not very strict. You can go in 1km range to buy groceries or eat something, that is allowed. I was also allowed to practice two hours a day in a very nearby hall. That was a bit of a disadvantage because I had to practice in a very small, one-table hall that the club arranged for me. That was the life for two weeks. It was hard because I couldn’t do gym or yoga because the rooms are also small here. So, you can’t do much in the room. I watched matches, analysed and spoke to my coaches. I did get a bit slowed down and then I had matches just a couple of days after the quarantine got over. So, that was tough.” 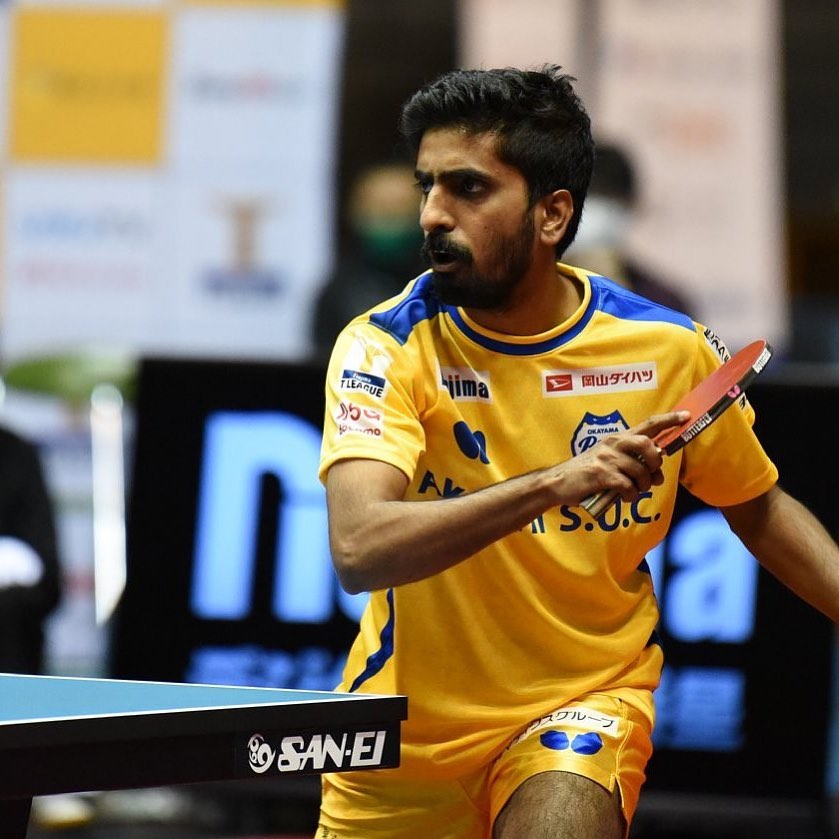 Sathiyan flew to Tokyo on November 23 as his club-organised work visa got delayed and then there was only one flight from New Delhi to Tokyo in a week. He quarantined till December 9 and the T.League matches began on December 10. “For Olympics, you need at least two weeks after the quarantine to prepare. We should be here for the Olympics at least a month in advance if there are quarantine rules but I sincerely hope they reduce the quarantine period.”

Sathiyan will be back in India on December 30 to celebrate the New Year with his near and dear ones. Sathiyan said the next year was surely going to be tough but hoped it would be better than 2020.

“Things are getting better so I am looking forward to it. It’s always been my dream to play the Olympics for India so that’s the big thing next year. I am a much mature player now and have learnt a lot of things about my game in the last year. I improved technically, physically and mentally. These things should help in the future. I hope 2021 is a game-changing year for me.”

World Table Tennis (Previously International Table Tennis Federation) has been revamped and will have a badminton-like tournament structure next year. “The ranking system, the number of tournaments, the rating system, everything will change,” Sathiyan said. WTT has announced a Hub tournament in the Middle East from March 17 followed by another in China and then in Europe – and all this from March to June.

Sathiyan, however, hoped that the Table Tennis Federation of India (TTFI), which is planning for the National Championships, is able to organise it so that the Indian players get enough match practice going into the Olympics.

“Harmeet is in France playing matches. Except for the two of us, no one has gone out of India and so, it’s going to be hard. Compared to other countries, who are having their leagues and players are getting matches, it’s tough in India. India had a national camp in Sonipat so, that’s a good beginning. But yes, matches are important.

“TTFI will probably conduct the national championships, which will be a great boom. We can at least begin playing amongst ourselves. We need to play tournaments. We all are training and everyone is on track with that but match shape is going to come only if we play tournaments. If TTFI conducts tournaments, it will be great and then WTT has to start tournaments and we Indians should start playing in them as soon as possible.”

Sathiyan aims to break into the Top 15 of the world rankings next year. “If I can go there, that will be great. I am working really hard for that,” he concluded.