India vs Oman Highlights, Friendly Football Match Updates: India made a fine comeback in the second half to hold fancied Oman 1-1 in their first international match in more than a year on Thursday. India conceded a goal in the 42nd minute with Chinglensana Singh’s clearance crossing the goal-line after hitting goalkeeper Amrinder Singh who started the match instead of Gurpreet Singh Sandhu.

Chinglensana's own goal was cancelled out by Manvir Singh's powerful header!

The best shots of Oman's goal in the first half...

Ishan Pandita is brought on in place of Bipin Singh.

Can the Indianforwrd continue his super sub form and score just like he did for FC Goa in the Indian Super League.

Yazed Maashani takes the free-kick after a rather poor tackle from Apuia. Amrinder Singh is up to the task as he dives to his left and palms it away.

Lalengmawia was shown a yellow card.

Mohammed Yasir is brought on in place of Akash Mishra. Igor Stimac is changing things around.!

What a ball from Bipin Singh from the right flank as the weight on the cross was pitch perfect. Manvir climbs the highest and heads India level.

Ahmed Al Kaabi and Chinglensana clash in the middle of the park. The referee stops play as the medics come running on. Both players are found to be okay.

A couple of changes as Apuia and Raynier Fernandes replace Jeakson Singh and Rowllin Borges.

At the break it is Oman who lead thanks to a goal in the 43rd minute. India have managed to keep pace with their opponents but their attacking output has been too far and too few.

HALF TIME! We trail at the break after Oman found the net late in the first half.

Aghbari drills the ball into the centre from the left flank as Chinglensana dives to clear. He gets the ball away from goal but it hits Amrinder and trickles into his own net.

Suresh Singh Wangjam with a brilliant steal as he passes it on for Bipin. The forward tries to wiggles his past the Oman defence but is stopped. Suresh then has to track back and puts in a tackle to stop the counter-attack.

Oman got the penalty after Abdul Aziz Al Meqbali is brought down by  Rowllin Borges.

Easy save from Amrinder Singh,as the Indian keeper dives to his right and gathers the ball quite comfortably.

19' - Ashique does well to control the ball and lay it off to an overlapping Akash down the left. The subsequent cross is cleared, however, just at the last moment as Manvir looked to get on the end of it.

Akaash has his hands full at the moment as he brings down an Oman player, a minute later, needlessly for a free-kick

What skill from Mohammed Al Ghafri! The Omani forward cuts inside from the left flank and gets a shot off on his stronger right foot, The ball flies just over Amrinder's goal.

India get a good chance in the 12th minute after some good work from Bipin down the right flank gets the ball to Manvir, who turns and shots. The shot deflects off for a corner, from which Sandesh Jhingan is in a great position to get the opener but the ball hits his foot and goes out.

Oman have been doing well to keep India away in the opening exchanges of the match. They are relying mostly on counter-attacks, which the Indian defenders and midfielders have been able to track and keep at bay so far.

Abdul Aziz Al Maqbali had a glorious chance to get Oman ahead in the th minute as his header from Amjad Al Harthi's cross was just off-target.

India and Oman are off at the Maktoom Bin Rashid Stadium in Duba!

India are attacking from right to left in blu as Oman are in red.

The final preparations ahead of India vs Oman!

Indian football team head coach Igor Stimac revealed that he was in tears after watching the footage of his side’s defeat to Oman despite leading till the 82nd minute of their opening World Cup Qualifier in 2019.

“When I looked back at earlier matches, I cried a few times. That first match (against Oman) was crucial, that match was going to determine whether we are going to fight for first two positions in group (and qualify for next round),” Stimac said. 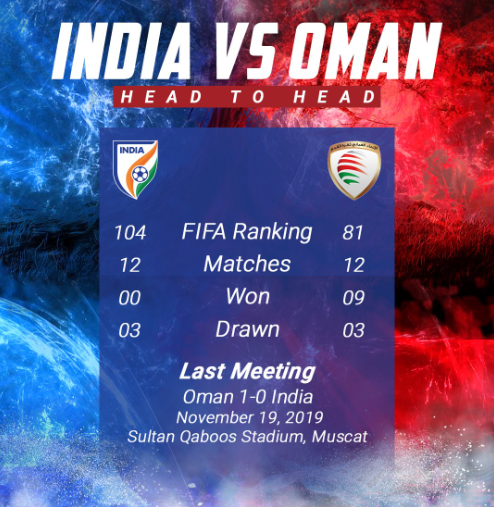 The Indian national team are back on the field after 492 days!

The Indian men's football team will play Oman (Today) and UAE (March 29th) as preparation for their FIFA World Cup qualifying matches that are scheduled to be played in June 2021! 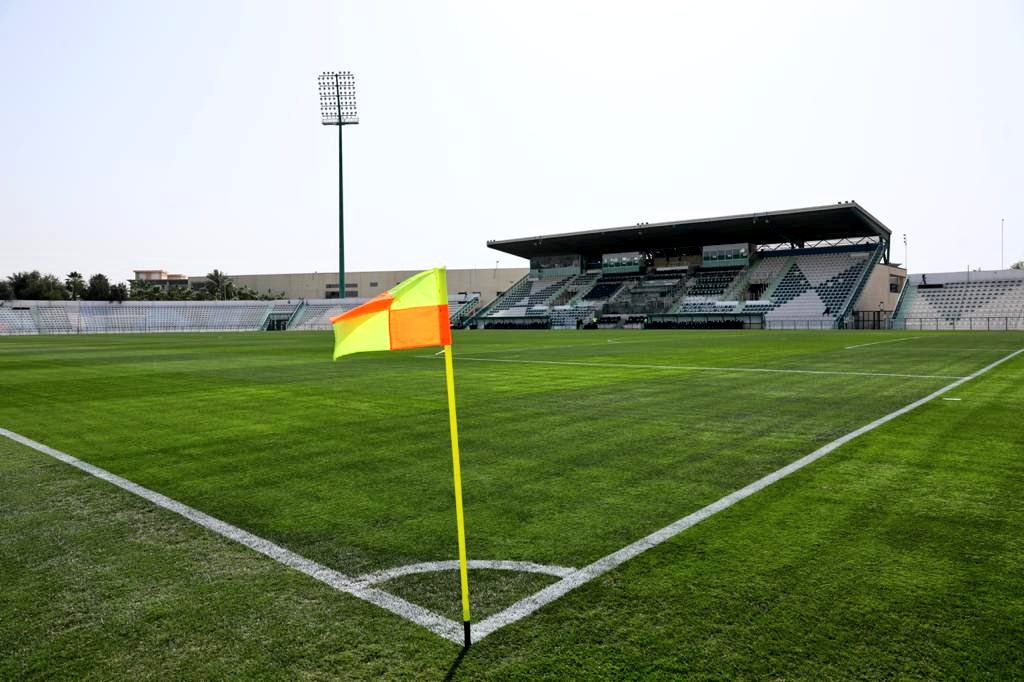 🚨 TEAM NEWS IS IN! 🚨#BlueTigers head coach @stimac_igor has named his starting XI for #INDOMA! ⚔️🔥

India will take on Oman in an international football friendly at the Maktoum Bin Rashid Al Maktoum Stadium in Dubai.

4️⃣9️⃣2️⃣ days since their last international match, the #BlueTigers 🐯 are all set to face off against Oman tonight 😍

Manvir Singh scored the equaliser in the 55th minute to help India pull off a rare draw against Oman in the first international outing after the COVID-19 lockdown. India head coach Igor Stimac gave debuts to as many 10 players. He had said before the match that he would give chances to maximum number of players for them to gain the experience of playing in big matches.

The first half was all about Oman attacking in waves with India not getting a single shot on target. Oman, who have won both the two-legged matches of the 2022 World Cup qualifying against India, played a high defensive line with more men on attack. India were content defending their citadel with more players in their own half and just one man upfront most of the time.

The Indians lost possession too easily on most occasions as Oman did not let them hold on to the ball for long. Oman squandered a penalty in the 27th minute after Rowlin Borges committed a foul on Abdul Aziz Al Gheilani inside the box. Aziz himself took the spot kick but shot straight to Amarinder Singh.

But Oman were not to be denied a goal in the first half. Al Aghbari got the ball on the left wing and sent a low cross on the face of the goal. Amrinder could not collect the ball cleanly and it hit Chinglensana Singh and went past the goal line. Stimac made two changes at the start of second session with Lalengmawia and Raynier Fernandes replacing Jeakson Singh and Rowllin Borges.

The Indians dished out a much improved show in the second half, holding the ball a lot more than the first 45 minutes and playing a more attacking game. India equalised five minutes before the hour mark. Bipin Singh sent in a delicious cross from the right flank which was headed home by Manvir.

Oman, ranked 81st as compared to India’s 104th in the FIFA charts, then pressed hard for the winning goal but Amrinder was impressive behind the bar as he made two fine saves in the 63rd and 65th minutes. India play their second international friendly against the UAE here on Monday. The friendiles are a part of preparations for the joint qualifying round matches of the 2022 World Cup and 2023 Asian Cup to be played in June.