Mary Kom contributed Rs one crore from her MP Local Area Development Scheme Fund to the towards fight against coronavirus pandemic.

New Delhi: Legendary Indian boxer Mary and Rajya Sabha MP Mary Kom on Monday made contributions towards fight against coronavirus pandemic. The 37-year-old said she has given her consent for release of Rs one crore from her MP Local Area Development Scheme (MPLADS) Fund towards the relief efforts amid the coronavirus pandemic.

Taking to Twitter, Mary Kom also announced that she was donating her one-month salary to Prime Minister's National Relief Fund. She posted the pictures of both the letters and said: "Lets #StayHome #StayHomeStaySafe #IndiaFightsCorona." 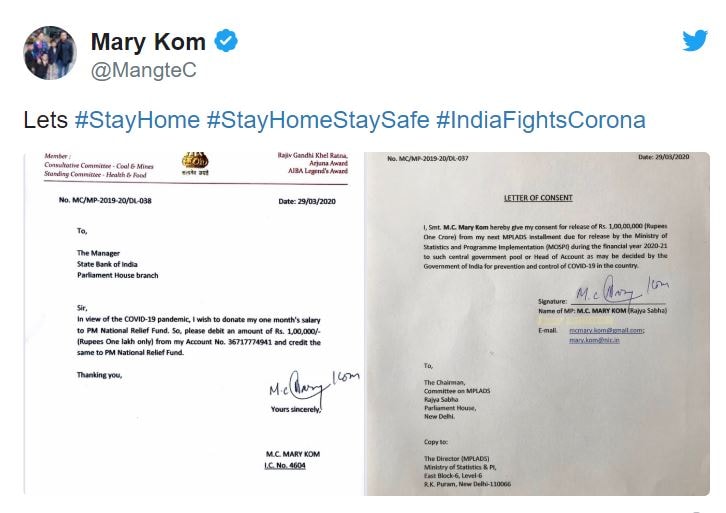 Former India opener and BJP MP Gautam Gambhir has also released Rs one crore out of his MPLADS Fund towards the relief efforts amid the coronavirus pandemic, which has so far claimed 29 lives in the country.

"These are testing times for all of us especially for the daily wage workers &amp; migrant labourers," he wrote on Twitter.

The Indian Olympic Association (IOA) also promised "support and contribution" towards the country's battle to contain the deadly COVID-19 pandemic, saying its member national federations and state affiliates will also step in to aid the cause.

Shuttler PV Sindhu has also donated a sum of Rs 10 lakh to combat the spread of coronavirus. Sindhu has donated Rs 5 lakh each to Andhra Pradesh and Telangana Chief Minister Relief Funds in fight against COVID-19 pandemic.

Wrestler Bajrang Punia, who works as an OSD in Railways, has already donated his six months' salary to Haryana coronavirus relief fund.

As for Mary Kom, earlier in the month, the ace Indian boxer had found herself in a controversy after she broke the 14-day quarantine protocol which has been put in place by the World Health Organisation (WHO) and the governments across the world.

Mary Kom, who had competed in the Asia-Oceania Olympic qualifiers in Amman, Jordan, had returned home March 13 and was supposed to be in self-isolation for a minimum of 14 days amid the ongoing coronavirus pandemic.

However, on March 18, she attended the breakfast hosted by President Ram Nath Kovind at the Rashtrapati Bhavan.